March has not even ended, though preliminary data indicates India has already imported over 130 tonnes of gold this month.

The restrictions the Indian Government implemented on gold trade spawned new life to smuggling cartels with all due consequences. Official Import fell drastically, wiping out any revenues the government collected from the import of the yellow metal. In May 2013 Indian gross gold import accounted for 168 tonnes, by September 2013 a multi year low was reached at 15 tonnes. Premiums in India, over London spot prices, skyrocketed to a staggering 25 %. 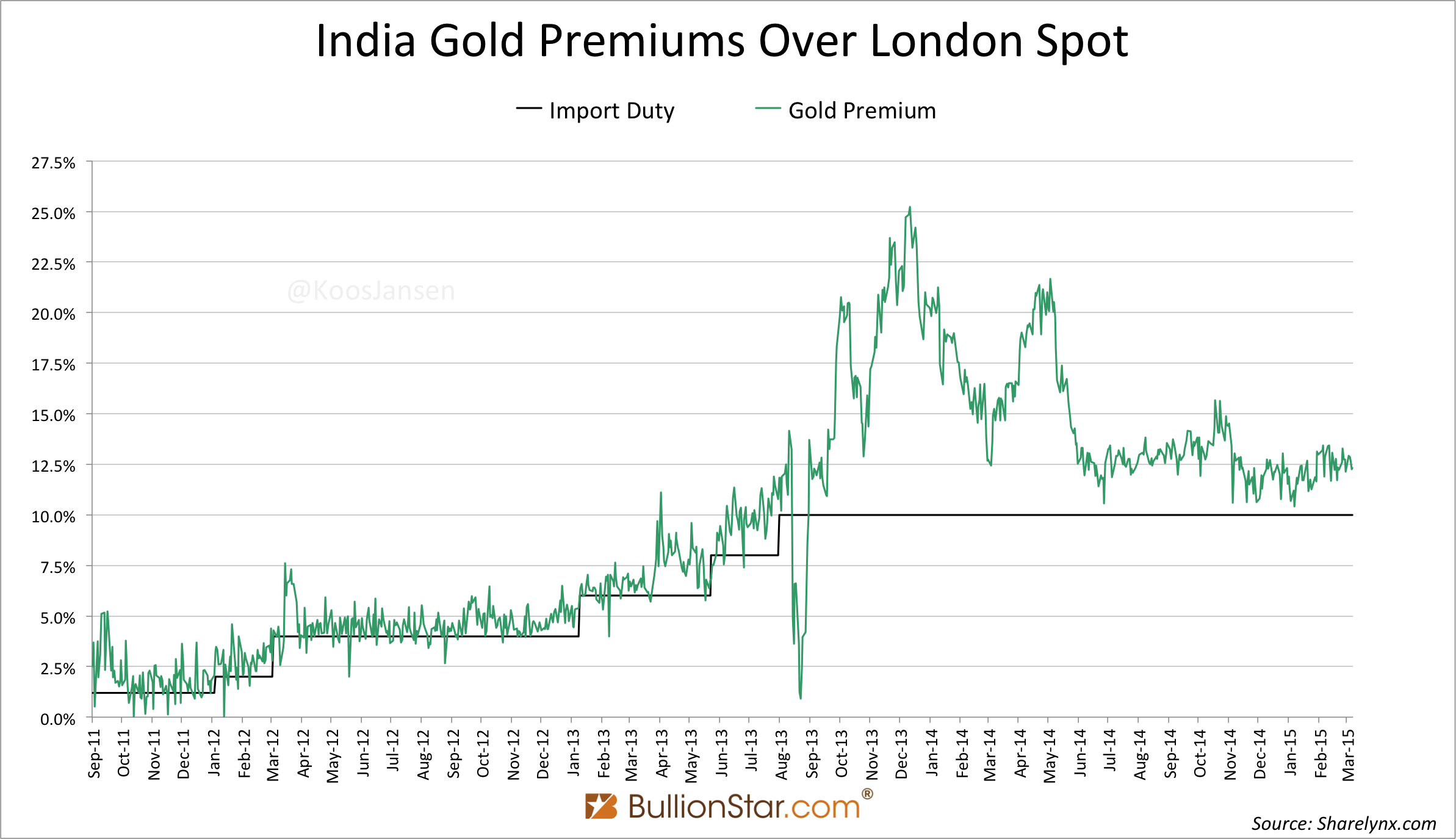 For a close look at recent import data let’s start with January; India officially gross imported a meager 39 tonnes, though up 9 % year on year. In February gross import accounted for 50 tonnes, up 57 % y/y. Then, the real surprise came this month; as said previously preliminary data (derived from daily numbers at Infodrive) suggests gross import accounts for 130 tonnes (March 2 – 21). When India’s Directorate General of Commercial Intelligence & Statistics will publish official data somewhere around April 13, we know the exact imported tonnage for March.

Perhaps surging import is caused by a falling price since the beginning of the year combined with the relaxation of import restrictions. Remarkably, premiums are staying close to 12 % (including the 10 % import duty), sourcing the metal is no problem. 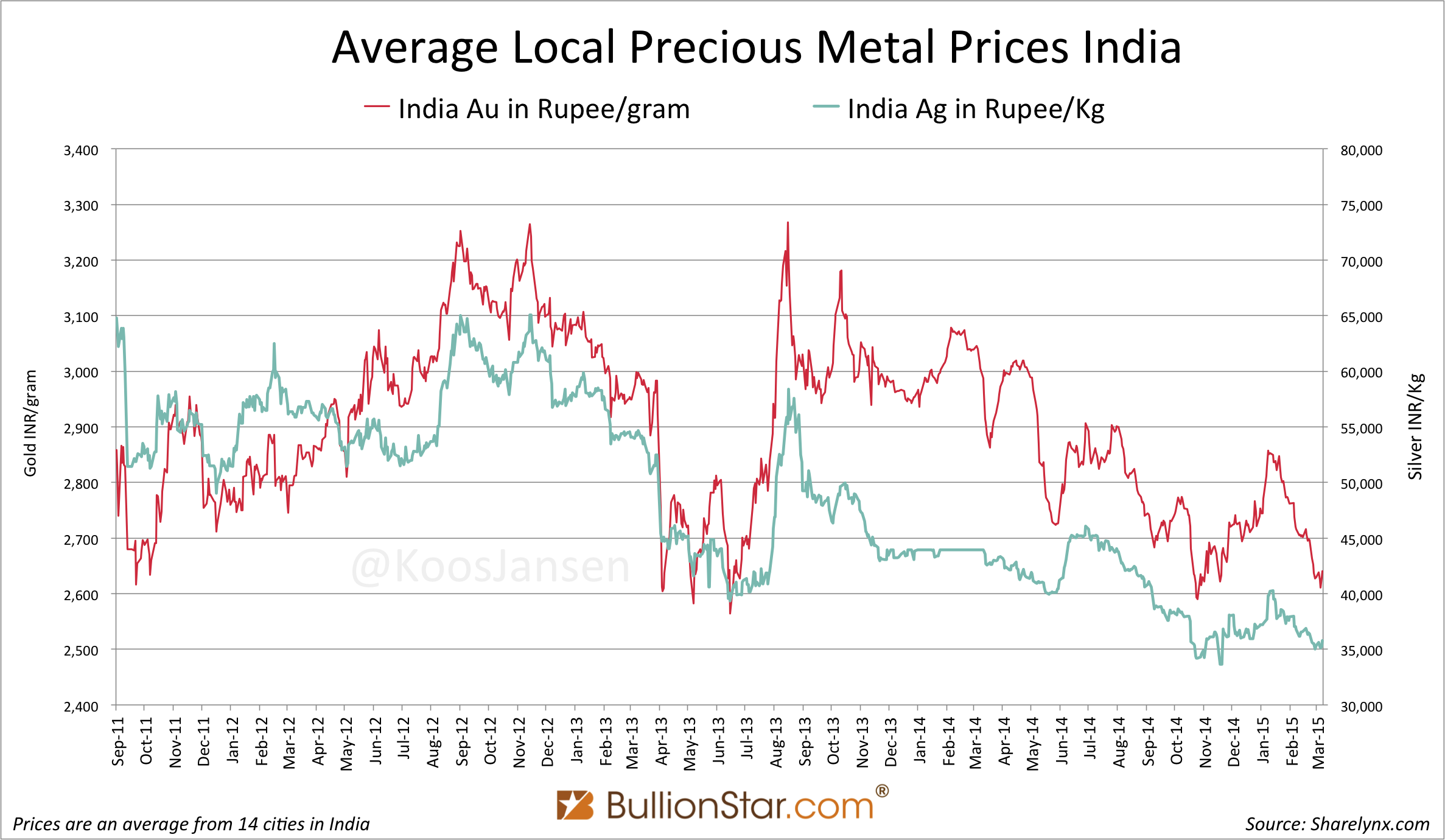 From daily trade data we can see a lot of gold from Ghana going directly to India. Could it be there is some conflict gold coming from Ghana?

A new scheme the India government is looking at to obstruct gold import is through monetizing gold, comparable to the Turkish system (read this post for the Turkish Reserve Option Mechanism). The World Gold Council’s managing director in India, Somasundaram PR, stated:

In short, the Indian people would be able to make a gold deposit at a commercial bank, which technically is always a loan to the bank. Subsequently this bank can use the gold to meet its reserve requirements at the central bank – in this case the Reserve Bank Of India (RBI). The deposits would accrue interest (in Turkey denominated in gold), however, like every bank deposit, the gold can vanish if the bank becomes insolvent. The universal rule is; no risk, no return.

Furthermore, if the gold deposit scheme will be implemented, to the likes of the World Gold Council, I wonder how the RBI will treat the gold held as reserve requirement. The Turkish central bank (CBRT) counts these reserves as official gold reserves, which is double counting. 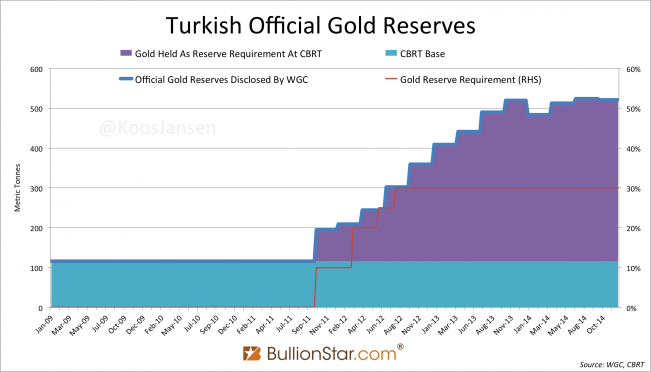 Increases in Turkish official gold reserves are not caused by CBRT purchases on the open market, but a reflection of the amount of gold held as reserve requirement by banks at the CBRT.

The World Gold Council has released two reports on gold monetization, (i) Why India Needs A Gold Policy, (ii) Turkey: gold in action. Both reports combined count nearly 90 pages, but not once are the risks of lending gold to a bank disclosed. Whereas most people own gold to explicitly avoid these banking risks.

Another plan from the Indian Government to prevent the circulation of “black money” is to require people doing gold purchases above 100,000 rupees, to show a so-called permanent account number (PAN), which is used to prevent tax evasion. This would be disastrous for the Indian jewelry industry as 80 % of the industry’s business comes from rural customers, who don’t have a PAN. Hence, Indian jewelers have threatened to go on strike against this plan.