ICBC: A New Global Currency Setup Is Being Conceived 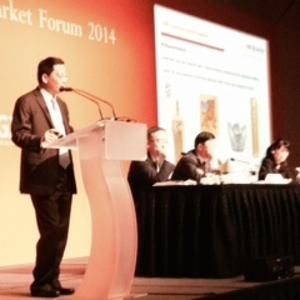 At the LBMA Bullion Market Forum in Singapore on June 25, 2014, two very important speakers attended; Xu Luode, chairman of the Shanghai Gold Exchange, and Zhou Ming, General Manager of the Precious Metals Department at ICBC. Me and Torgny Persson have written about the speeches from Xu and Zhou in previous posts, in this post we will take a closer look at what Zhou said, based on what Chinese media have written about it (whereas Western media are reluctant to cover this). His statements are not entirely new as he already had revealed some objectives of ICBC’s precious metals department in an interview conducted on January 7, 2014; ICBC’s main goal is to become a significant player in the international gold market. Yet, he made a few remarkable statements in Singapore. First, a few segments from the article/interview published in January:

In 2013, ICBC physical gold sales increased by more than 80% YoY, the growth rate of the entire line of business also grew more than 30% over the previous year.

For Zhou, the growth of the precious metals business is not accidental. Aside from ICBC’s management in forward-thinking and advantages from being a bank, it’s also because in China’s internationalization process banking institutions are required to play this role.

When the precious metals department was established, ICBC chairman Jiang Jianqing said: “We have the ambition that ICBC becomes a world-class commercial bank in precious metals investment management.”

Zhou: “…one day China enters the international stage, we will need more people to participate in understanding the characteristics of capital flows, so we don’t have to be so passive. I drive our traders to work on scale and quantitative problems of our platform for the possibility of taking part in international transactions.”

For the future, Zhou Ming’s goals are clear and simple: to continue to build the precious metals battleship, heading towards international markets. “In 2013 China became the world ‘s largest gold producer and consumer, there is no reason for it not to have any voice in international price fluctuations.”

The following is a translation of an article in Chinese media about Zhou’s speech at the LBMA Forum in Singapore June 25, 2014. Translated by Soh Tiong Hum from Terraseeds.com.

Invited by London Bullion Market Association (LBMA), Zhou Ming, General Manager of Precious Metals Department at Industrial and Commercial Bank of China (ICBC), represented the bank at the LBMA Bullion Market Forum 2014 held in Singapore. Zhou made a keynote speech where he:

Global precious metals market has experienced centuries of evolution and development. After World War II, the world economy was re-arranged to form a dollar-dominated international monetary system of credit. The international status of gold was replaced by the dollar and the international price of gold was pegged to the dollar. This phenomenon was referred to as ‘dollar-pricing’.

Following several economic crises, US dollar’s influence on the international monetary system is now on the wane. The 2007 subprime crisis in the US delivered an unprecedented blow to US Dollar hegemony. Gold, which has the best properties of money of all precious metals, in contrast became a banner of resistance to the economic crisis. Its price of $ 290 per ounce in the beginning of 2000, shot above $ 1900 per ounce in 2011.

Six years after the global financial crisis, despite a series of financial stimulus – quantitative easing that increased the size of the Federal Reserve’s balance sheet to $ 4 trillion in a few years, both the current and previous head of the Federal Reserve remain defensive of QE policy. Although the Fed announced that it will start reducing the scale of QE on December 19, 2013, after which the international gold price fell below $ 1200 per ounce at one point, international analysts see China’s demand and huge import as a decisive element for the reversal in the gold price. In 2013 a Bloomberg report said that 26 million ounces (800 metric tonnes) of gold was moved from London to Swiss refiners and then to China via Hong Kong.

When Jeremy East, Managing Director at Standard Chartered Bank, asked at the LBMA Forum In Singapore if the statement “Western gold moves East” was true, Zhou made the following statements:

The factors supporting the gold price are not limited to these. Stephen Roach, senior lecturer at Yale University, formerly chairman of Morgan Stanley Asia and chief economist at Morgan Stanley agreed with Zhou in a conversation last year: “Although the US stock market continues to boom in hand with falling bond yields, US economic recovery remains fragile with a lack of recovery in US companies which causes labor unemployment levels to remain high, GDP growth to slow down and inflation to remain lower than pre-crisis levels. The international gold price is not in an environment that sustains falling prices.

Now in the second half of 2014, the gold market is an important part of the world’s modern financial system and that means for China to internationalize its financial markets. When the development of China’s gold market supervision and regulation policies are complete, China’s commercial banks’ overseas businesses will flourish and opportunities from the Shanghai FTZ can be used; the Shanghai Gold Exchange will officially launch an international board within 2014.

The international board will initially look at foreign institutional investors in the region to establish a free trade yuan-denominated spot gold trading platform and a corresponding settlement system so as to provide offshore RMB investment and circulation in a new channel. RMB cross-border trading accounts will also have a payment service.

Breakthroughs in many national policies and system developments will play an important part in the internationalization of China’s financial market and its place in international gold-pricing.

Oddly enough there hasn’t been any mainstream news outlet that has published anything about the speeches from Xu and Zhou, while these are very important for the international gold market. Additionally the LBMA just published the slides from the speakers at the forum in Singapore, except the ones from Xu and Zhou! Torgny Persson, who visited the forum, assured me both did use slides in their presentations. I find it strange these slides are not published. The LBMA notes on its website that in a couple of weeks it will publish the transcripts of the speeches from the Singapore forum. I’m very curious if the transcripts of Xu and Zhou will be appended.