How Constant Is Gold’s Purchasing Power?

An often-perceived analysis in the gold community is that gold is the constant in our global economy. But is this true? Yes and no. Allow me to share my observations. Although gold has an exceptionally constant nature, and we have yet to see another currency that can compete with gold’s constant nature, the reality is, that there is no exact constant in economics. In any market all goods, assets, currencies, etc. continuously fluctuate in value relative to each other due to ever changing supply and demand dynamics. Having said that, in this post we’ll examine gold’s constant nature by measuring its purchasing power in the short (weeks) medium (years) and long term (decades). Additionally, we’ll compare our findings to fiat’s nature.

In turn, fiat can have periods of being constant in the short term, but will always lose value in the medium term and evaporate in the long term. Thereby, due to fiat’s fragile nature and the current stress in global finance, there are also risks fiat can significantly devalue overnight. Hence, gold is highly suitable to secure one’s purchasing power.

For the sake of simplicity, we’ll use publicly available Consumer Price Index (CPI) and Wholesale Price Index (WPI) data to measure the value of goods and services.

Gold’s Purchasing Power In The Short And Medium Term

On occasion we can read gold commentators stating that when the price of gold rises or falls in the short term, it’s actually fiat that is falling or rising. As, according to this analysis gold is the constant. Let’s test if this analysis is accurate. In the week from January 4 until January 9, 2016, the price of gold in British pounds surged 5.9 % from £23,096 pound per Kg to £24,469 per Kg. We can be quite sure that the price of goods and services in the UK remained flat during this period. As a consequence, in this example gold could buy 5.9 % more goods and services at the end of the week, whilst sterling could buy exactly the same amount of goods and services all week long. So, in this particular example, what was more constant? It was sterling. The reason is that currently the international monetary standard is fiat.

Moving on to the medium term. In the chart below I’ve plotted the purchasing power index of gold versus the British pound, based on CPI data and the gold price, from July 2010 until June 2016. 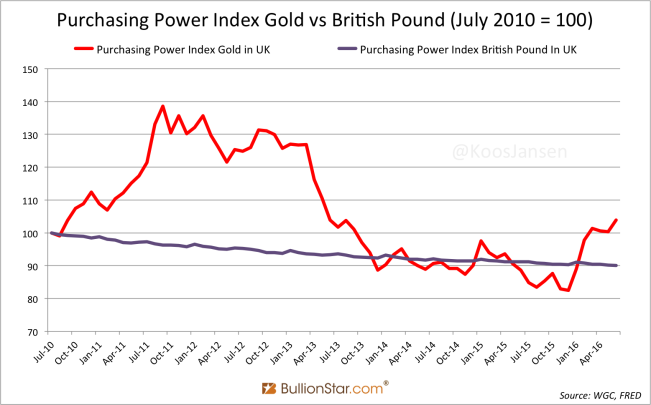 To get the best understanding of his subject, let us zoom out and have a look at gold and the pound’s purchasing power since 1500. The following chart is conceived by Nick Laird from GCRU, based on data collected by himself and Roy Jastram. The chart is perhaps more difficult to interpret than the previous one. To be clear, we can see 3 index lines:

As you can see, if the price of gold (blue) transcends wholesale prices (green), as a consequence gold’s purchasing power (red) is escalated – and vice versa.

Clearly the red line has remained roughly flat, around 100, for hundreds of years! This shows gold’s remarkable constant nature. Note, since the gold standard has been gradually dismantled (1914) gold’s purchasing power became more volatile but remained robust in the long term.

Furthermore, we can see that prior to 1914 wholesale prices were also fairly constant but this is due to the fact sterling was tied to gold during this era. Since the gold standard was abandoned step-by-step from 1914 onwards, the blue and the green line have skyrocketed, evaporating the purchasing power of sterling. Since 1971 the British pound has lost over 93 % of its purchasing power – in 1975 inflation topped 20 %.

For the future, if the current fiat international monetary system will breach its limits and has to be re-anchored to gold, I expect gold to become more constant in both the short and medium term when providing a center pillar in finance.