The main arguments presented by Western consultancy firms, such as GFMS and the World Gold Council (WGC), to explain the difference between SGE withdrawals and Chinese consumer gold demand relate to Chinese Commodity Financing Deals (CCFDs). However, this analysis is incorrect as I will demonstrate in this post.

CCFDs are used by Chinese speculators to acquire cheap funds using commodities as collateral. When it comes to using gold as collateral for CCFDs there are two options: round tripping and gold leasing. First we’ll discuss round tripping.

Goldman Sachs (GS) has properly described the round tripping process in a report dated March 2014. We’ll start by reading a few segments from GS about financing deals [brackets added by me]:

Important to understand is that gold in round tripping needs to be physically imported into China and then exported, in contrast to copper. The reason for this, which GS fails to mention, is that the cross-border trade rules for gold in China are different than for all other commodities. Only through processing trade gold can be imported into China mainland by enterprises that do not carry a PBOC gold trade license. Round tripping by speculators can only be done through processing trade, as it’s not possible through general trade to ship gold into China without a PBOC license. Consequently, round tripping flows are completely separated from the Chinese domestic gold market where the SGE operates. And hence, round tripping cannot inflate SGE withdrawals.

Only by bending the rules – set up a fake jewelry enterprise in a CSSA – speculators can import gold to round trip. By using processing trade, in order to import gold into China, speculators are required to subsequently export the exact same amount of gold, because these speculators pretend to be jewelry manufacturers importing gold for genuine production, which upon completion must be exported. This is why the gold is round tripped. The requirement for export in processing trade can be read in the official PRC Customs Supervision and Administration of Processing Trade Goods Procedures (2004):

“Processing trade” shall refer to the business activity of import of operating enterprises of all or some raw and auxiliary materials, components, parts, mechanical components and packing materials (Materials and Parts) and the re-export thereof as finished products after processing or assembling.

Now we can understand why GS wrote [brackets added by me]:

Specifically, gold financing deals [round tripping] involve the physical import of gold and export of gold semi-fabricated products to bring the FX into China…

The speculators export semi-fabricated gold products to keep up the appearance they are genuine gold fabricators, for which the gold imported must be processed and exported.

Round tripping does not inflate net export from Hong Kong to China, only gross trade. The net amount of gold imported into China is shipped through general trade, via the SGE, into the Chinese domestic gold market and is prohibited from being exported. 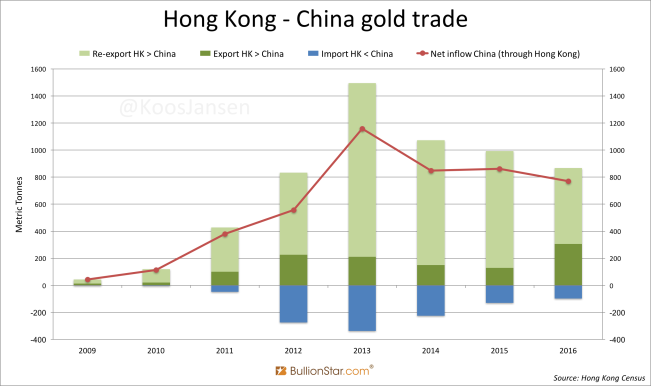 In the chart above we can see China exported 330 tonnes to Hong Kong in 2013. Let’s guess 200 tonnes of that was genuine processing trade (jewelry manufactured in a Chinese CSSA).

In the latter scenario a lot less physical gold is involved (10 tonnes versus 130 tonnes). In reality it’s more likely a gold batch used in round tripping is making multiple rounds than one round.

The other gold financing deal that can be conducted by Chinese speculators is gold leasing (which is the same as gold lending). In general gold leasing is a normal market practice.

To become familiar with the lease market I have categorized all potential gold lessees (borrowers) in three groups for us to have a look at examples (with US dollars) of how gold lending is done in financial markets:

In China gold leases are settled and transferred through the SGE. The mechanics of the lease market in China was best described in an essay by the PBOC from 2011:

I would like to insert a comment supplementing the PBOC’s description of gold leasing in the Chinese domestic gold market. In the paper it says:

My source at ICBC’s precious metals trading desk told me ICBC has little gold of itself for leasing, most of the gold lend out is sourced from third parties. These parties are either SGE members or overseas banks that supply gold through the Chinese OTC market. ICBC operates in the lease market as an intermediary by connecting supply and demand, it can lease from international banks or local gold owners with an SGE Bullion Account and lend the gold to miners, jewelers or speculators. My suspicion is that the international gold lease rate is lower than the Chinese gold lease rate, which can attract gold from the international market into the Chinese domestic gold market.

The Chinese lease market in short: in China all gold leases are settled through the SGE (there can be an off-SGE lease market, but it would be highly illiquid). Both lessor (lender) and lessee (borrower) are required to have an SGE Account. If a lease is agreed between two parties gold is transferred from one SGE Bullion Account to the other, when the lease comes due the gold is returned. At SGE level it’s as simple as that.

Therefor, if SGE withdrawals capture leased gold this is for genuine jewelry fabrication that eventually ends up at retail level. When a jeweler needs to repay the lease it simply buys gold at the SGE to subsequently transfer it from its SGE Bullion Account to the lessor’s SGE Bullion Account. It’s not likely a jeweler would buy gold off-SGE to repay a lease, which then would need to be refined into newly cast bars by an SGE approved refiner to enter the SGE vaults. Gold leasing by jewelers can increase SGE withdrawals (for genuine gold business) but not so much supply to the SGE.

In a report the World Gold Council (WGC) released in April 2014, China’s gold market: progress and prospects, it was stated:

… No statistics are available on the outstanding amount of gold tied up in financial operations … but Precious Metals Insights [PMI] believes it is feasible that by the end of 2013 this could have reached a cumulative 1,000t…

This 1,000 tonnes figure is based on a misunderstanding regarding the Chinese gold lease market. PMI assumed there was 1,000 tonnes of gold tied up in financing deals based on the yearly lease volume in China, which was 1,070 tonnes in 2013. However, the yearly lease volume is not the gold that is leased out at any point in time, but reflects the aggregated volumes disclosed on all lease contracts that are executed over one year’s time in the Chinese domestic gold market (turnover). Meaning, if 100 mining companies lease 2 tonnes of gold for 1 month in 2016 and all leases are rolled over 4 additional months, the yearly lease volume would be 1,000 tonnes (100 x 2 x (1 + 4)), while on 31 December 2016 the total amount of gold leased out could be nil. (It’s impossible there was 1,000 tonnes used in round tripping as gross export from China has never been more than 330 tonnes)

In addition, the WGC used the words ‘tied up‘ for the gold used in financing operations, which sounds as if the market will be flooded when the gold is untied. The words ‘tied up’ can be misleading, let me explain: If a speculator borrows gold he will promptly sell it spot, this gold will not leave the SGE system. During such a lease period there is nothing tied up, there is just a debt to be repaid. When the lease comes due the lessee has to buy gold in the market (SGE) to settle the debt, which is the opposite of what the WGC insinuates what happens when gold is untied. In case a jewelry company leases gold the words tied up are more appropriate, in my view, as the borrowed gold bars are in transit from being processed to being sold as jewelry. Gold involved (tied up) in these leases can only be a share of the total amount of gold leased out in any point in time, because we all agree most leases in China are done for financing. There is only a small percentage of total gold loans tied up by jewelry companies.

Needless to say I don’t agree for the reasons just mentioned regarding gold leasing (speculators and miners borrowing gold will never withdraw the metal). Am I the only one? No. When Na Liu of CNC Asset Management Ltd, visited the SGE in May 2014 he spoke to the President of the SGE Transaction Department. From Na:

The President of the SGE’s Transaction Department is clearly stating most leasing happens within the SGE system and this metal is not withdrawn. Therefor, gold leasing by speculators does not inflate SGE withdrawals and thus does not explain the difference between SGE withdrawals and Chinese consumer gold demand as disclosed by the GFMS.

Remarkably, when I asked the WGC about the details in 2014 they replied [brackets adde by Koos Jansen]:

In their email the World Gold Council admits gold leases that are withdrawn from the SGE vaults are used for genuine gold business and being part of true gold demand. This is more confirmation gold leasing cannot explain the difference.

Over recent years we have observed a rising number of commercial banks participating in the gold leasing market. … It’s estimated that around 10% of the leased gold leaves the SGE’s vaults. The majority is for financing purposes and is sold at the SGE [and stays within the SGE vaults] for cash settlement.