This post highlights gold charts for gold markets and gold exchanges like the Chinese Gold Market, the flow of gold from West to East, the London Gold Market and Gold ETFs.

All of the charts featured below are originating from GOLD CHARTS R US. For BullionStar’s gold and silver price charts, go to BullionStar Charts where you for example can measure different assets in terms of gold.

This SGE Gold Withdrawals gold chart shows cumulative gold withdrawals in tonnes from the Shanghai Gold Exchange between 2008 to 2016.Over that period a phenomenal 13,000 tonnes of gold has physically been withdrawn from the gold vaults connected to the Shanghai gold exchange. The lower frame of the chart plots monthly gold withdrawals, which in October 2016 totalled 153 tonnes of gold.

This CHINDIA chart combines the Chinese gold market and the Indian Gold Market demand in tonnes by adding Indian gold imports and the aforementioned Shanghai Gold Exchange Withdrawals. Over the nine-year period from 2008 to 2016, cumulative gold demand from these two huge nations is approaching a staggering 20,000 tonnes of gold. The lower section of the chart plots combined monthly Chinese gold demand and Indian monthly gold demand, and is a great proxy for tracking the ebbs and flows of gold through these two gold powerhouses.

Additions to Russia’s official gold reserves are closely scrutinized more than most since a) they are substantial and on an upward trajectory, and b) gold is championed by the Russian State as a strategic monetary reserve. This chart of gold reserves of the Central Bank of the Russian Federation from 2006 to 2016 shows this trend clearly with the Bank’s gold holdings now nearing 1,600 tonnes.

The chart’s lower section plots monthly changes to the Bank’s gold holdings, with the latest month being particularly topical given that October 2016 witnessed the largest single monthly increase of gold (over 40 tonnes) in Russia’s gold holdings since October 1998.

Transparent Gold Holdings – ETFs and other

Given the international gold market’s traditional opacity, the growth and evolution of gold-backed Exchange Traded Funds (ETFs) and similar products over the last 10-15 years has given the world at least one window into more transparent gold flows, gold holdings and gold movements.

This chart tracks total gold holdings held in a large number of these products and vehicles over a 2 year rolling period and relates changes in these holdings to the US Dollar gold price. The tracked products currently hold a combined 2,700 tonnes of gold (left hand axis). The lower portion of the chart features weekly changes to total holdings, and highlights a change in trend (gold outflow) in conjunction with a dropping gold price over the last 3 weeks. 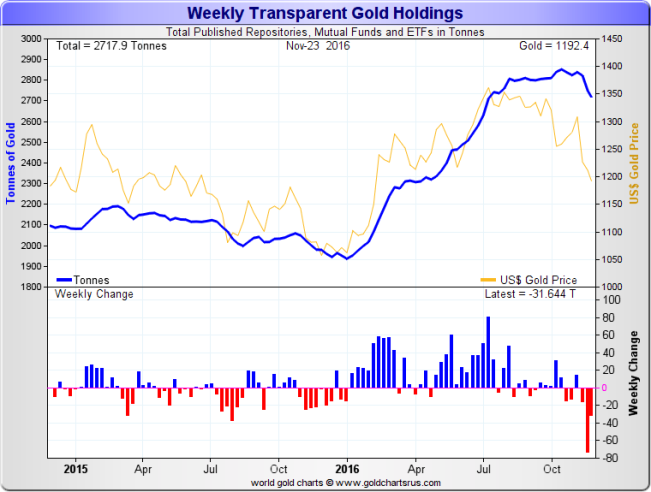 As the world’s largest gold refining center, hosting such gold refiners as PAMP and Argor-Heraeus, gold imports and gold exports into and out of Switzerland provide perhaps the most accurate insights into physical gold movements around the world. Since January 2014, the Swiss Federal Customs Administration has included monthly non-monetary gold, i.e. gold that is not related to central banks, import and export statistics in its foreign trade statistics. This includes data on a country level basis. And they even backdated the monthly data to 2012.

This chart shows Swiss gold imports and gold exports on a rolling monthly basis over a rolling 2 year period. Net import-exports are charted in the lower pane. Following net gold inflows over 2015 and into early 2016, there have been net gold outflows from Switzerland since May of this year.

On a monthly basis, Swiss gold imports / gold exports from and to individual countries are probably the most interesting datasets published by the Swiss Federal Customs. This data is graphically represented in the below ‘latest month’ charts, which feature approximately 25 countries both as import sources and export destinations.

In October, the biggest suppliers of gold to Switzerland were the USA, UAE and Hong Kong, followed by France and the UK.

On a destination basis, in October Switzerland exported nearly 70% of its gold exports to three countries, namely Hong Kong, India and China, with the UK a distant fourth.

Swiss – UK gold flow has been a very topical theme this year, primarily because the UK (read London) became a major importer of gold from Switzerland from March 2016 until October 2016. Prior to this, the UK was a large gold exporter to Switzerland for much of the previous 3 years, especially in 2013. The inflows of gold into the UK from Switzerland during 2016 suggest that gold inventories in London were in short supply, a topic covered in BullionStar blogs here and here.

This chart shows Swiss gold imports and exports from and to the UK over a 5 year period from 2012 to 2016. Is the recent tide of UK imports from Switzerland about to turn back to UK exports to Switzerland. October may give some clues, but additional month’s data is required before know whether a new trend is being established.

The amount of gold backing Comex gold futures contracts that sits in storage in New York at Comex approved warehouses is always a topic of lively debate and controversy. Given the huge volumes of gold futures traded on the Comex each day and the fact that Comex trading is a key driver of global gold price discovery, this is a legitimate and important debate.

The below chart plots registered and eligible gold in these Comex approved warehouses over a 16 year period from 2001 to 2016. Registered gold is gold (100 oz bars and kilo bars) for which a warrant (document of title) has been issued by a vault facility in satisfaction of delivery of a gold futures contract. Eligible gold is all the gold (excluding the registered gold) residing in a Comex approved vault which is acceptable by the Comex for delivery against gold futures contracts.

Given the multitude of charts which exist on these Comex gold inventories, this one is a nice simple graphical representation of how much (or how little) gold is actually sitting there in the approved vaults in Manhattan, Queens and Delaware.