Physical gold withdrawals from the Shanghai Gold Exchange are a good proxy of wholesale gold demand in mainland China. Why this is so is explained in Koos Jansen’s articles and also in summary article in the BullionStar Gold University titled “The Mechanics of the Domestic Chinese Gold Market." 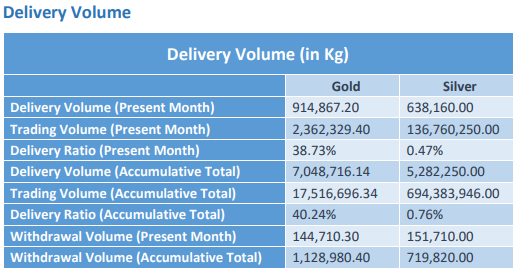 For the year-to-date to the end of July 2017, physical gold withdrawals from the SGE vaults in China have now reached a cumulative 1129 tonnes, which if annualized would be 1935 tonnes, or approximately two-thirds of annual primary global gold supply.

Adding SGE Gold withdrawals to Chinese central bank gold reserves gives a reasonable proxy for the combined amount of physical gold within China’s borders that is controlled by both the Chinese population and the Chinese State. Further adding net Indian gold imports to this Chinese total gives a resulting figure known as Chinese and Indian Gold Demand (CHINDIA). CHINDIA gold demand is then a convenient metric of the total physical gold demand emanating from the world’s two largest physical gold markets, i.e. China and India.

The central bank of the Russian Federation (Bank of Russia) reported official gold reserve additions of 12.4 tonnes during July 2017. For the year-to-date to end of July, Russian official gold reserves have now risen by 115 tonnes. With 5 months remaining in the year, the Russian central bank will now most likely need to announce average monthly gold purchases of 17 tonnes per month if it is to ensure total gold reserve accumulation of 200 tonnes for the full year of 2017. Therefore, expect the sensationalist reporting of Russian gold purchases, from some elements of the media, to intensify over coming months.

The gold price as measured in US Dollars ebbed lower during the first few trading days of August while remaining in a tight trading range near the $1260 level. Then from August 9 the price made a move up towards the $1300 level but this level was denied. A second attempt by the US dollar gold price a few days later made a brief move above $1300 but this was also short-lived. The remainder of August was the same story, with the gold price failing to rise above the $1300 mark, a situation which, from one perspective, continues to offer buying opportunities below this $1300 level.

The following chart shows the amount of physical gold held across a broad array of Exchange Traded Funds, futures exchanges and other products which regularly divulge their gold holdings.

During August, there was a slight increase in the quantity of gold reported in this combined category, however, but the change was practically imperceptible. This continues the trend for the year-to-date in which there is very little change month-on-month for the overall quantity of gold flowing into or out of these products and holdings.

After only sending 5 tonnes of gold to Switzerland during June, the UK (or more correctly the London wholesale Gold Market) returned in July to being the top exporter of gold to the Swiss, sending 81 tonnes into Switzerland’s borders.

Apart from January 2017 when the UK exported 84 tonnes of non-monetary gold to Switzerland, July was by far the busiest month of 2017 for gold shipments from the London vaults to the Swiss, as this next chart illustrates.

As was noted in last month’s issue of BullionStar’s monthly charting article:

“during July, the world’s largest gold ETF, the SPDR Gold Trust (GLD), saw its gold holdings shrink from about 840 tonnes to under 800 tonnes. This was a continuation of the downward trend that saw GLD gold holdings fall from the 865 tonne level in early June.

Could the bullion banks in London be raiding the GLD so as to source physical gold to send to the Far East via Switzerland? Possibly, but if so, this has not shown up in Swiss gold imports for June (see below), but could possibly show up in Switzerland’s July import figures, which will only be released in August.“

Turkey, India, Hong Kong, China and Singapore were the 5 largest destinations for Swiss non-monetary gold exports during July. Between them, these 5 economies imported 91.3 tonnes of gold from Switzerland in July, or 75% of the month’s total gold exports. All of these markets host buoyant physical gold markets and testify to the dominance of Eastern markets in generating the bulk of global physical gold demand.