Using charts created by the GOLD CHARTS R US chart website, this monthly series from BullionStar looks at the latest trends in some of the world’s most important physical gold markets such as Switzerland, China, and India. Among the charts this month is commentary explaining how the Bank of Russia is said to acquire its gold holdings, how the SPDR Gold Trust has been noticeably losing gold since June, how the US (and not London) was the top supplier of gold to Switzerland during July, and how there are 68 owners per ounce of COMEX registered gold for every gold claim traded on the COMEX gold futures exchange.

Note that the SGE vaulting network comprises 61 vaults across 35 cities in China. See slide 7 of the SGE presentation at this link for map of China with the vault locations highlighted.

The CHINDIA chart has a 2 month lag since Indian gold imports are released with greater than 1 month lag. Hence the latest ‘official’ Indian gold import data is for May 2017. In May 2017, gold imports into India surged to 123.7 tonnes, recording their highest monthly import total over any of the last 12 months.

Indian gold exports in May 2017 totalled 13.6 tonnes, resulting in net gold imports of 110 tonnes. Added to SGE gold withdrawals of 138 tonnes in May 2017, this results in the 248 tonnes figure you see in the above CHINDIA chart.

Note that the Chinese central bank (People’s Bank of China  PBoC) has not announced any increases in its official gold reserve holdings since October 2016, and its gold holdings have officially remained static at 1842 tonnes. This is not to say that the PBoC has stopped purchasing gold. Official PBoC gold reserve figures may significantly under-report actual holdings. See “PBoC Gold Purchases: Secretive Accumulation on the International Market" on the BullionStar website for details.

In June, the Bank of Russia (central bank of the Russian Federation) announced a 9.3 tonne increase in its official gold reserve holdings. This brings the year-to-date increase in Russian gold reserves to 102.6 tonnes, which when annualised is 205 tonnes. The next 5-6 months will undoubtedly see the Bank of Russia announce further gold purchases each month so as to add another 100 tonnes or so to its gold reserves, which on average would be about 16-17 tonnes per month from now until December.

Finally, there is also the Russian state-owned “Precious Metals and Gems fund" known as “The Gosfund" which is run by “The Gokhran". This fund could also conceivably be buying a portion of Russian gold mining output and stockpiling it, and then every so often the Gokhran could be transferring a quantity of gold to the Bank of Russia. When asked by BullionStar could it reveal its gold holdings, the Gokhran replied that it does not publish information about the amount of gold reserves in the Russian Gosfund nor any data about its precious metal operations.

During July, the price of gold as measured in US Dollars began the month in the $1240 range, then ebbed towards the $1210 range during the first two weeks of trading, before regaining ground in week 3 and week 4 of the month, to a 1-month high above $1260.

For the month of July, the combined gold inventories of the group of products / vehicles / platforms which publicly reveal their gold holdings fell by about 2 million ounces (~ 60 tonnes). However, since this group of entities is quite diverse and includes gold-backed ETFs, futures exchanges’ gold inventories, and the gold backing online platforms etc, then any gold movements from, for example, one ETF, can be obscured by offsetting movements in another ETF.

What is notable though is that during July, the world’s largest gold ETF, the SPDR Gold Trust (GLD), saw its gold holdings shrink from about 840 tonnes to under 800 tonnes. This was a continuation of the downward trend that saw GLD gold holdings fall from the 865 tonne level in early June. Could the bullion banks in London be raiding the GLD so as to source physical gold to send to the Far East via Switzerland? Possibly, but if so, this has not shown up in Swiss gold imports for June (see below), but could possibly show up in Switzerland’s July import figures, which will only be released in August.

June was the second month in a row that Switzerland experienced net exports of gold, with exports in June going chiefly, as always, to the Asian markets (see below). As stated in this column last month:

“After net importing 151 tonnes of gold during the January to April period, the Swiss refineries are now drawing down on those inventories and shipping higher volumes of gold out to the Asian gold markets."

This trend has again continued in June. The 151 tonne net buildup in Swiss held gold from January to April has now reversed by 39 tonnes in May and another 37 tonnes in June, meaning that the net buildup during 2017 is now only 75 tonnes. 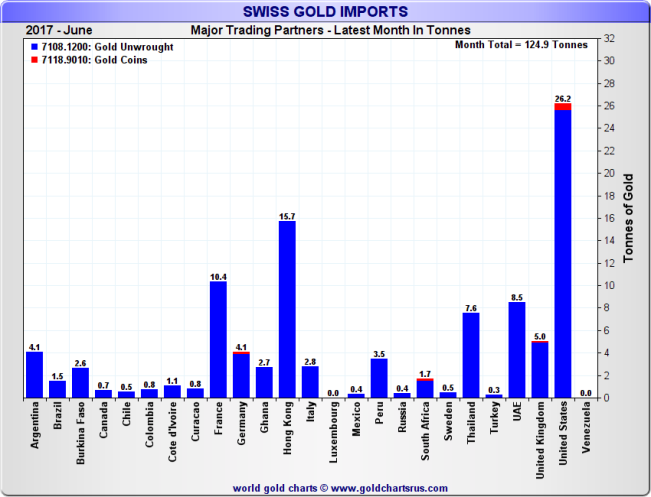 On the gold export side, Switzerland (mostly Swiss refineries) exported 162 tonnes in June,  of which 51.8 tonnes went to Hong Kong, 40.3 tonnes to China, 27.5 tonnes to India, and 12.8 tonnes to Turkey. Together Hong Kong and China comprised 57% of total Swiss gold exports during June. Adding in India, the combined percentage was 74%. Therefore, a staggering three-quarters of physical gold flowing out of the world’s largest gold refining center went to three Asian markets, and two if you count Hong Kong as part of greater China. Adding in Turkey (the 4th largest destination for Swiss gold exports), and the total percentage was 82%. 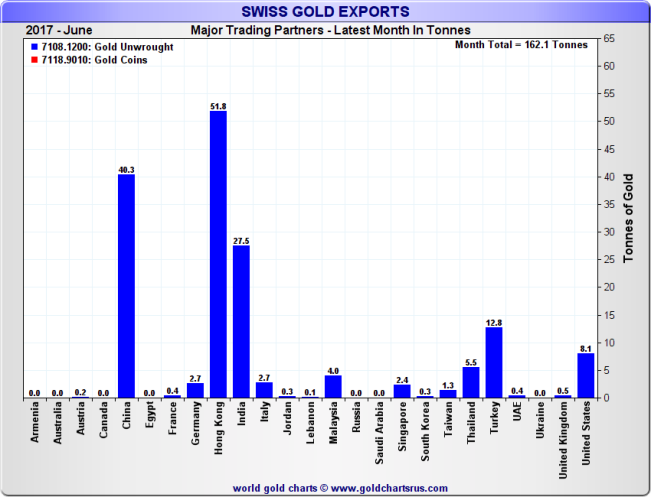 Usually the London gold vaults are either a primary source of gold for Swiss gold import, or a significant destination for Swiss gold exports, with a noticeable gold flow in one of these two directions. However, this month London only supplied 5 tonnes of gold to the Swiss, and took less than 0.5 tonnes from the Swiss. However, on an overall basis from January to June 2017, the London Gold Market has still supplied 177 tonnes of non-monetary gold to Switzerland.

The open interest in COMEX gold futures is currently 1500 tonnes, yet there are only 22 tonnes of Registered gold in the COMEX vault inventories. This means that there are 68 owners per ounce of registered gold."

See BullionStar article “Is the COMEX Rigged?" for full details.