Many gold bugs argue that governments and central banks are generally biased against gold. In some cases, like I described in my previous post, they are right. Certain countries, with India as the most notable example, have adopted hostile gold policies.

In this post, I will however show that the tide has turned with many central banks not only accumulating gold but understanding the importance of gold. Many central bankers are well aware of the fragility of our current monetary system based on fractional reserves. Some have even been preparing decades for the demise of the fiat currency system and place an important role on gold in recapitalizing the system when it inevitably crashes in its current form.

The accumulated central bank purchases of 477 tons in 2014 were the second largest accumulation in 50 years.

Among the purchasers, we particularly note Russia followed by other CIS countries, developing countries and countries in the Middle East.

Russia was the largest gold buyer adding 173 tons to its gold reserves in 2014. The Russian gold holdings currently stand at about 1,200 tons, equal to 12 % of the overall Russian reserves. Russia is officially the fifth largest gold holding country in the world trailing only the US, Germany, Italy and France. China, in sixth place, has however likely increased its reserves substantially without updating the world on its holdings since April 2009.

As noted by the Russians, and many before them, gold provides stability and conserves purchasing power in a way that fiat currencies have never and can never do. The below chart of the gold price in Russian Ruble speaks for itself. 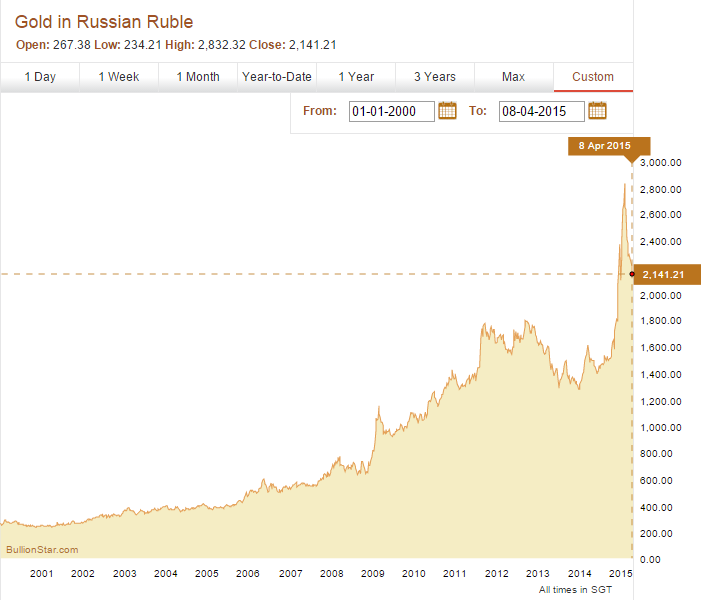 At the turn of the millennium 1 gram of gold cost 267 rubles whereas today it costs 2141 rubles. The ruble has thus lost 87.5 % of its value compared to gold in a mere 15 years.

A policy suggestion rearing its ugly head in times of currency crises, with supranational bodies like the IMF often being the instigators, is for a country to sell its gold to defend the currency. This has been tried several times historically with meager results. The country off-loading its gold is usually worse after selling than before. Without any gold to indirectly back up the currency, the worthlessness of the irredeemable fiat currency becomes apparent to everyone and the central bank only loses more control not being able to properly re-capitalize the system with gold in the future.

Contrary to international pressure, Russia hasn’t shown any interest in selling its gold and is instead adding gold to its reserves. The Russian economy is sometimes said to be structurally weak as it lacks in diversification being dependent on the production and export of commodities. I disagree. The Russians are wise in letting the ruble depreciate to balance the economy. Russia is running perpetual trade surpluses. By saving some of the surplus in gold and by building strategic commodity reserves, Russia’s position in world affairs will inevitably strengthen over time. With no debt, a healthy gold policy and strong commodities production, Russia is positioning themselves well for the next monetary phase and will fare better than most when the global monetary system resets.

Following a concern that uncoordinated gold sales would have destabilized the gold market, the first central bank gold agreement (CBGA 1) was signed in 1999. The agreement stipulated that a maximum 400 tons of gold could be sold each year by the 15 central banks of Western Europe that entered into the agreement.

The selling quotas were quickly filled for CBGA 1 but at the end of the second agreement (CBGA 2), spanning between 2005 and 2009, there was a trend shift with the central bank selling falling below 200 tons, filling less than half of the yearly quota. The central bank gold selling has decreased every year since, with most central banks stopping selling altogether. In 2014, the last year of CBGA 3, central bank gold sales under the program amounted to a mere 6.8 tons.

The private European investment demand for gold isn’t following the trend of placing larger importance on gold though. Westerners often claim gold to be “underperforming" or argue against gold on the basis of it not paying any interest. Mainstream media in the West is also quick to join in on the the sarcasm of criticizing gold. Private and the institutional gold holdings through ETF’s, predominantly held in the west, has decreased by 1039 tons in 2013-2014 leaving ETF gold holdings at about 1700 tons.

This trend of westerners selling their ETF gold held on digital/paper accounts may actually be one of the most important but least discussed geopolitical trends of our time.

But by letting go of their gold, westerners are essentially buying time for the doomed fiat monetary system where the US dollar serves as the reserve currency. I will get back with an in depth analysis of why this is the case and also analyze the behavior of the European central banks more in depth in posts following this one.

The demand for gold in Asia generally and China specifically is insatiable. Gold demand in China reached about 2100 tons in 2014 coming close to the the annual global gold production of 2700 tons.

Indians added at least 842 tons to the global gold demand in 2014 but the figure is likely significantly understated due to the extensive Indian gold smuggling in the light of the restrictive Indian gold policies.

Adding demand from the rest of the world, it’s clear that gold production and gold recycling alone can’t satisfy the global demand. Eastern demand instead has to be met by gold flowing from the West. This is exactly what we see with the ETF gold selling in the West. Gold sold by the ETF holders is exported by the UK to refineries in Switzerland and sold onwards to China.

With more than a third of the ETF gold depleted and the with the trend slowing, China can’t indefinitely depend on gold from the ETF’s though. The major question is how the Chinese demand is going to be satisfied moving forward when the western stockpiles are depleted.

China has cleverly and silently re-built their gold market domestically since 2003. They have built a sound and stable infrastructure for the domestic gold market based on physical gold trading as opposed to the paper trading. At the same time, the state has stayed in control dictating that all domestically produced gold and all imported gold must flow through the state controlled Shanghai Gold Exchange. By furthermore encouraging private individuals to save in gold and banning gold exports, the amount of gold held in the China as a whole has increased significantly. Although unknown, state gold reserves have also likely increased substantially.

Starting at the LBMA forum in Singapore in 2014, China has become more public about their gold affairs. The sheer size of their gold market and their ambitious intentions to internationalize the Chinese gold market with the Shanghai International Gold Exchange (SGEI) have been disclosed publicly.

China has identified the price discovery problem for physical gold on the international market and is instead patiently building their own full ecosystem for physical gold trading and price discovery. By opening the SGEI, it’s furthermore possible for China to encourage foreign producers and refineries to export gold directly to China through the Shanghai Free Trade Zone.

My opinion is that China with the SGE and SGEI is not only targeting increased jurisdictional control of the physical marketplace and price discovery mechanism but is also trying to circumvent the traditional gold routes. As China is emptying the western vaults, China’s objective is likely to ensure a continued eastbound flow of gold regardless of what happens to the fragile paper markets in the West.

Whereas western governments and central banks are busy rigging interest rates, manipulating markets and injecting money, China has established a market for physical gold where the price is soundly set by the market forces.  This will ensure gold flowing even if the paper markets in the west default or decouple in terms of pricing.

On one hand China is staying true to the Chinese tradition of a strong center keeping a top-down approach in regulating the gold market by e.g. banning exports, only allowing 15 banks to import gold and stipulating that all supply must go through the SGE. On the other hand, the market itself (within this set framework of the SGE being the one marketplace) is much healthier than in the West as the market forces dictate the price.

With China gradually seizing control and jurisdiction of the gold market, there’s immense implications in terms of power shifting from the West to the East. It’s playing out right before our eyes but not many of us see it…

Singapore is the only open economy in the world where the government understands the importance of gold.

Singapore is developing an open marketplace oriented approach as opposed to China which controls the actual marketplace. By exempting precious metals from GST and actively encouraging precious metals companies to set up in the country, the Singaporean government is actively creating a transit, trading and storage hub for gold in Singapore.

There’s no taxes for precious metals in Singapore whatsoever. No GST/VAT/sales tax, no capital gains tax, no dividend tax, no import or export tax, no duties.

There’s furthermore no reporting requirements when you buy or store bullion in Singapore.

Adding to the appeal is that Singapore is the safest country in the world with basically no crime and a strong rule of law. Coupled with the political stability and strong property ownership rights, Singapore stands out uniquely in the gold sphere which is why we established BullionStar here in the first place!