I’ve got a confession to make: I believe in conspiracy facts. After having witnessed scandals like NSA, LIBOR, Lance Armstrong, ISDAfix, money laundering by too big to fail banks, rigged currency rates, Bernie Madoff, the US sub-prime crisis, bank bailouts (in Europe and the US), the Greek tragedy, 9/11, the Iraq invasion and Enron, I came to the conclusion it is just what people do when there is money and power at stake: they conspire.

When it comes to gold price manipulation there are currently four camps:

Camp one states the price of gold isn’t manipulated at all. (Although we know bonds, interest rates, stocks, commodities, CPI and exchange rates, and thus all currencies are manipulated. Furthermore, futures exchanges are flushed with enormous amounts of contracts in the most illiquid hours, trades that don’t make sense from a profit perspective because the seller doesn’t get the most money for its products. Sure, it happens both ways, which only illustrates how easy the price is manipulated.)

Camp two states the US (and its allies) are manipulating the price of gold, a historical fact, in a last attempt to save the US dollar hegemony.

Camp three states the Chinese have been manipulating the price of gold in recent months, in their challenging quest to diversify their foreign exchange holdings. Supposedly they bring down the price of gold through the western paper markets to buy as much physical gold in exchange for their still relative strong dollars. If true, a strategy that has worked excellent in 2013.

Camp four states the price of gold is manipulated in conjunction by the west and the east. A result from deals made behind the scenes, or an orchestration of a new monetary order through redistributing gold among nations according to the size of their economy.

Because I learn every day, eventually I will choose one camp to reside. Meanwhile I’ve been staying in camp two, three and four in recent months – perhaps closely circling the truth – occupied thinking of all interests, evidence and complexity. One thing is for sure, the ones that manipulate would never admit and always blame another. This is why all Chinese blame the US.

The next translation I present is from a speech by Sun Zhaoxue, the most influential leader in the Chinese gold industry. As president of the China Gold Association and president of China Gold Group, China’s largest gold mining company, he spoke at the Lujiazui Forum. A yearly conference attended by prominent Chinese economists on new visions for financial reform and opening up. 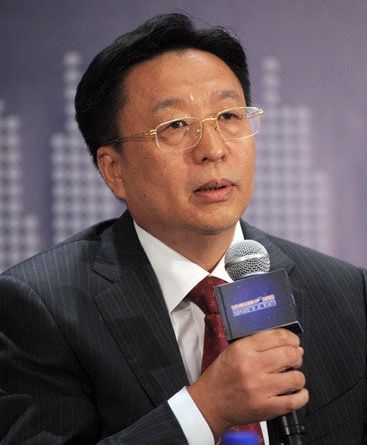 Sina Financial News June 28, 2013 – At the Lujiazui Forum River Nocturne sub-forum held today, China National Gold Group Corporation General Manager Zhaoxue said the United States intends to suppress gold to ensure the Dollar’s dominance, that the fall in the price of gold was premeditated, and a part of the currency war.

“The hottest topic at the moment is oil and gold. The ground war we are seeing around the world is I think war for oil whereas gold is the currency war. Why? We observe that the integrity was the driver for US Dollar to become world reserve currency. The US Dollar and gold decoupling from 1971 caused the US Dollar to depreciate massively. From 1990 onwards, the Eurozone was in consultation to form a strong Euro to counter the US Dollar, in order to prevent the latter from stripping Europe of its wealth. The Euro was born in 1999, supported by its strong economy and 11,000 tons of gold.

With the birth of the Euro a competitor to the US Dollar was created, and so the US decided to lay a trap for the Eurozone as part of the currency war. Some countries in the Eurozone violated the Eurozone’s norms by issuing bonds. Which entities participated in the issuance? US investment banks. After the debt was issued, it was US ratings agencies that struck a blow to the Eurozone by saying that its economies had problems.

Only gold remains on par with the US Dollar to benefit from the Eurozone and Euros collapse. This is why the US began to suppress gold by issuing a statement two months ago that the Eurozone will sell its gold when it is unable to service its debt, then stating three days later that the news was false. Furthermore Goldman Sachs made a forecast for the gold price at the beginning of the year but suddenly changed its course saying the gold price will fall to $1300. Buffet said that he would not buy gold even if its price fell to 800USD. Our research indicates that Buffet made a lot of money from four gold companies. So his statement is inconsistent with his personal action.

Bernanke’s speech followed, saying that monetary easing will end, that the US economy is improving. This series of examples shows that the fall of the gold price is premeditated. So I say that this process is a genuine currency war.

Many people say that gold is just a beautiful thing. Then we have to ask the US why they store so much gold but instead of selling gold, they issue debt to other countries to rescue the financial market.  The US owes Germany so much gold but instead of repaying immediately, it sets a 2020 deadline to return the gold. From this example and process as well as some typical factors, this is a downright currency war to maintain the US Dollar hegemony by defeating all other currencies. I shall stop here.”

Notes by the Translator:

1. Some of the phrases did not make sense.

2. The first paragraph was an introduction but the second paragraph was worded like verbatim but without open and close inverted commas.

3. There were a lot of ‘fillers’ that are typically used in Chinese conversation but which would be unnecessary or casual in a speech or written material.

Therefore I suspect that this article is a transcription of what Sun said during the forum. But the transcription probably suffered from missing words which is why some parts did not make sense (being filled in by a transcriber) and maybe even not a full transcription but only excerpts.

This article appears to be a transcription of excerpts or some kind of conversation in the forum. Even the choice of words ‘Eurozone’s norms’ is very strange.

Building a strong economic and financial security barrier for China