In the end stage of 2013, in between 16 – 20 December, the “Chinese Aunties" have withdrawn 55 tons of gold from the vaults of the Shanghai Gold Exchange. That’s more than the official gold reserves of Finland and most likely more than what has been globally mined that week. The Chinese gold rush has been in an upward trend in recent weeks. Lets see how much gold will be drawn from the vaults in the last trading week of 2013. The yearly total of withdrawals, which equal Chinese gold demand, are on track to reach 2169 tons.

SGE gold premiums remained stable over this period around 1 %. 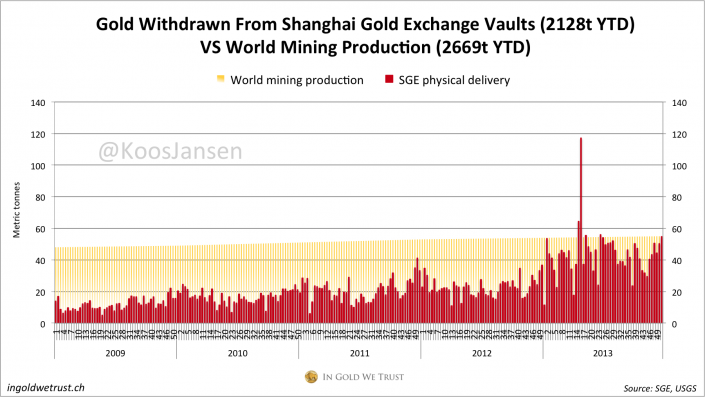 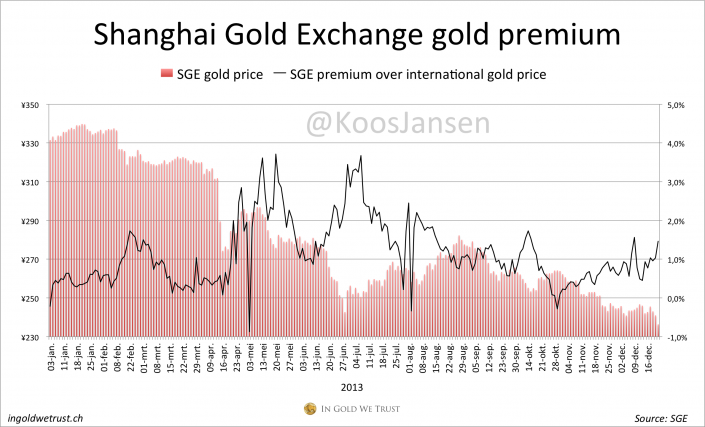 On December 28 there was a podcast released on SilverDoctors.com named: PM FUND MANAGER: 57 TONS OF GOLD DRAINED FROM SHANGHAI VAULTS IN PAST WEEK! It’s a conversation between the Doc and Dave Kanzler.

My comment on the part where they talk about the SGE (starts at 6:50):

The Doc states correctly that in between 9 and 13 December 2013 there were 50 tons of gold withdrawn from the SGE vaults (look a few images up at the screen dump from the Chinese SGE weekly report, I drew a green line under this amount of withdrawals). The Doc also states there has been roughly 2100 tons of gold withdrawn year to date which equals Chinese demand according to the PBOC (underlined in red). Again correct, IMVHO.

Then Dave Kanzler responds that is was actually 57 tons in that week (9-13 December). From this moment on Dave an the Doc start talking about two different subjects. The Doc refers to gold withdrawn from the vaults, where Dave refers to the amount of gold in the vaults that changes ownership at the end of a trading day through settlement between long and short contracts (a process that can be repeated into infinity, not quite significant data for gold investors that are interested in demand). I know this not only because they state different numbers, I know this because it’s clear where Dave gets his data from. Dave looks at the English SGE website that only publishes data on gold ownership changes in the vaults (if you check the website it exactly coincides with Dave’s numbers). The Doc looks at the Chinese SGE website (or my blog) that publishes how much physical gold actually leaves the vaults and tells us a lot about Chinese demand.

On a second note the title of the podcast bears a false statement. In week 50 (nor 51) there has not been 57 tons of gold being withdrawn from the vaults of the Shanghai Gold Exchange.

I wrote an open letter to Andrew Maguire once on the same matter.