It seems the Shanghai Gold Exchange (SGE) is continuing to publish the amount of gold withdrawn from the vaults on a monthly basis. For the month of January “SGE withdrawals” accounted for 225 tonnes, down 1 % from December. After the first weekly SGE reports in 2016 did not disclose SGE withdrawal data and phone calls to the bourse in Shanghai answered these numbers would not be published anymore we can wonder why the Chinese have changed their stance.

The SGE releases reports with trading data in several intervals in either English or Chinese. Until the last week of 2015 SGE withdrawals, a measure for Chinese wholesale gold demand, were published in the Chinese weekly and monthly reports. Then, an announcement published on the English website of the SGE on 11 January 2016 stated the “the Exchange has adjusted some terms in the Delivery Reports”.

This is where the confusion started because the SGE announced in English to adjust its nomenclature in the Chinese “Market Data Weekly Reports and Market Data Monthly Reports” – I cannot find the same announcement in Chinese. Their intensions were positive though, as there often has been disorientation regarding terms the SGE used inconsistently in the past. In example, the term “delivery”.

The announcement stated the SGE would adjust “distributing market data … effective as of Jan. 1st 2016 and are clarified as follows”:

2.The term “load-out volume” refers to the total volume of standard physical bullions withdrawn from SGE-certified vaults by members and customers.

4.Delivery-related data of silver products are added into the reports.

What I found early January was that the first Market Data Weekly Report did not honor the new guidelines from the announcement. In the first weekly report the delivery amount did not match its description, and there was no “load-out volume” (/withdraw volume) to be found. After several phone calls to the SGE to ask if the “load-out volume” data would ever be published we were told no. In the second weekly report the delivery amount did match its description, but there was still no “load-out volume” to be found.

However, this morning Nick Laird from Sharelynx pointed out to me the first Market Data Monthly Report has been released and this report has a different format than the Market Data Weekly Reports. In the Monthly report we can read at the very bottom:

I will spare you my analysis of Chinese characters, but according to a friend in Singapore and Google Translate the top line means “current month volume out of the warehouse” and the bottom line means “cumulative volume out of the warehouse”. I did not reach out to a professional translator, however, I called the SGE again and finally ended up talking to someone at the “delivery department”. This person confirmed to me (over the phone in English) that indeed the “load-out volume” was disclosed at the bottom of the monthly report.

I like to be very cautious in stating the SGE will henceforth publish withdrawal data in the monthly reports. Having seen changes in the first two weekly reports and inconsistent formats in the weekly and monthly reports makes me wonder if we can rest assured the SGE will publish the “load-out volume” in the future.

Hopefully, the SGE decides to continue publishing withdrawal data and the writers of the new weekly and monthly reports were just finding their way to adjust to the new guidelines. Why they would publish withdrawal data only in the monthly reports and not in the weekly reports beats me. Let us be patient and see what the coming reports have to offer. I’ve also send an email to the person I spoke to at the SGE delivery department to ask for written confirmation regarding the “load-out volume” disclosed in the monthly report, which perhaps will be replied with an elucidating statement. 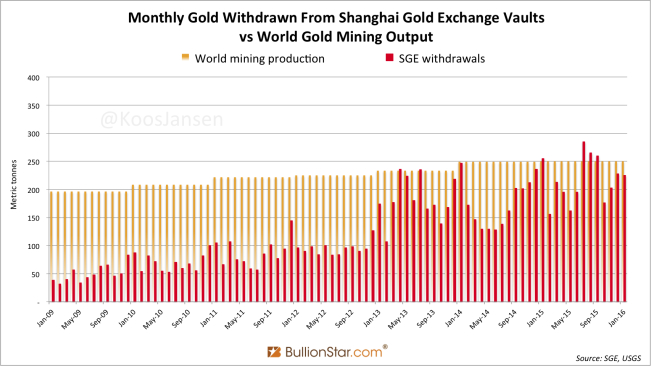