I was invited by Scotiabank to speak about Chinese gold demand at their commodities outlook conference on 12 January 2016 in Toronto. Of course I was thrilled to come over and share what I’ve been studying for the past years – thanks again Scotiabank for inviting me!

In my 20-minute presentation I could clearly explain why I think Chinese gold demand is not what mainstream consultancy firms (GFMS, WGC, Metals Focus, CPM Group) would like you to believe. While I was there I also took the opportunity to talk to Jeffrey Christian, who was speaking right before me on conference day. Mr Christian is a Managing Partner of CPM Group, which is one of the consultancy firms whose Chinese gold demand statistics I’ve fiercely disputed over the years.

Previously, in 2014, me and Mr Christian have debated the subject of Chinese gold demand on these very pages. After I wrote CPM Group an open letter in response to their Market Alert, now sadly offline, Mr Christian took the time to debate me in the comment section of my blog. In my opinion this is how it should be, open debate between the mainstream firms and us the independent gold researchers. Mr Christian showed to be a good sport by discussing our differences.

In Toronto we could briefly resume talking about our differences offstage. We didn’t agree, naturally, but it was valuable to hear some of his arguments – that’s what fuels debate and incentivizes me to investigate certain segment of the gold market more thoroughly. On stage I was pleased to able to present my view on Chinese gold demand right after his. 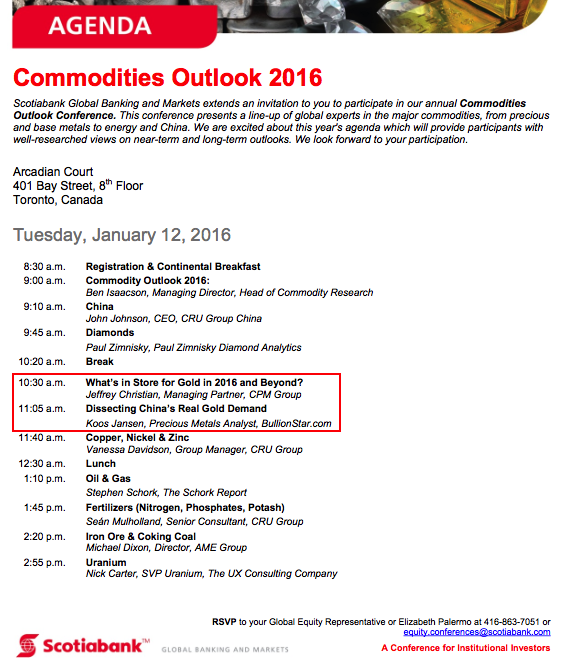 In a nutshell Mr Christian stated Chinese gold demand was roughly 933 tonnes (30 million ounces) in 2015, while I stated it was more like 2,000 tonnes, as China has imported roughly 1,400 tonnes, mined 450 tonnes and scrap was likely more than 150 tonnes for the year (the details about all data from 2015 will be published shorty).

Unfortunately the recording of my presentation is not allowed by Scotiabank to be republished on YouTube. So what I did is re-record the presentation. Below you can find the video, my voice in combination with the slides, which turned out to be a concise analysis of the Chinese gold market. The first part is about Chinese private gold demand and the structure of the Chinese domestic gold market. In the second part I speculate about purchases from China’s central bank that have to be added to Chinese private gold demand, according to my analysis.