With the charts I publish about physical delivery on the Shanghai Gold Exchange and the COMEX I try to show how much metal is withdrawn from these exchanges. A few days ago two articles appeared on the internet in which the delivery process of a gold futures contract at the COMEX is explained. For me it contained some new insights. One was written by Miguel Perez-Santalla, vice president of business development for BullionVault, the other by trader and blogger Kid Dynamite. The most important that came forward is that deliveries do not necessarily leave the COMEX vaults. When delivery is settled the buyer receives a warrant after which he can decide to take the metal out of the vault, or leave it in and resell it at a later date through going short. We don’t know how much metal is drained from the COMEX by looking at delivery settlements. Data on warehouse stock is available but doesn’t include numbers on withdraws and restocks, only the change in total stock. The question arose if the delivery process at the SGE is the same as on the COMEX. If this is the case it would also put the SGE delivery numbers, recently published by me and many others, in a somewhat different perspective. Before I started publishing data from the COMEX and the SGE I had contact with employees of both exchanges to have my numbers confirmed. In these conversations I explicitly asked if the delivery numbers referred to physical gold that leaves the vault. Both exchanges assured me they did, but apparently my friend in Chicago didn’t know the details of COMEX delivery. I asked him twice; “If a gold futures contract is delivered, does this gold leave the vault?“. He answered yes and yes. This week I’ve asked my friend in Shanghai one more time about SGE delivery to be absolutely sure on this. My email to him:

As you have understood I’m collecting data, not only from the SGE but also from other metal exchanges like the CME/COMEX. I’m mainly interested in the amount of physical gold delivered on these exchanges. That is gold leaving the vaults.

Recently I learned how “physical delivery" really works on the CME, as described in the article below. Before I thought a long taking delivery always meant physical gold was moved from the vaults. This is, probably for all futures exchanges, not true.

A long taking delivery doesn’t necessarily move its gold from the vaults, he is merely receiving a warrant of ownership and he can choose to take the gold out or leave it in.

How is this on the SGE? I assume it may be different because the SGE started as a physical only exchange and later began trading derivatives.

This is why I would like to ask you again; are the physical deliveries, published by the SGE on page 7 of the weekly reports, about physical gold leaving the vaults (and going out of the SGE system) or are they about physical gold changing ownership in the SGE vaults?

Hope to hear from you, thanks in advance

According to the SGE the delivery numbers I publish on this blog are about physical gold leaving the vaults.
Two other facts on the Chinese gold market; all Chinese gold supply (mining, scrap and import) is required to be sold through the Shanghai bourse. And gold that is taken out of an SGE vault is not aloud to come back in. The following screen dump is taken from a webpage of a gold product from ICBC.

2010 total delivery is not only documented in it’s weekly and monthly report but is also mentioned on page 1 of this document, which is an edited version of a keynote speech made at the LBMA bullion market forum in Shanghai on 26 May 2011, by chairman and president of the SGE Wang Zhe. 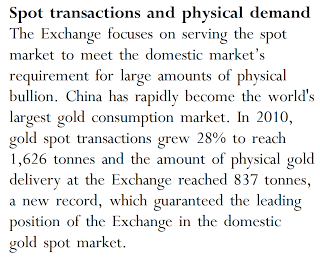 According to Wang Zhe physical delivery in 2010 was 837 tons. On the last report from 2010 we read (gold that leaves the SGE vaults!), the second number from the right which says 本年累计交割量:

Also 837 tons! Confirming the deliveries published in the SGE reports are about physical gold that leaves the SGE vaults.

Below a few more insights in the delivery process of the SGE.

This is the delivery process illustrated by the SGE, found on page 2 of the China Gold Market Report 2011. 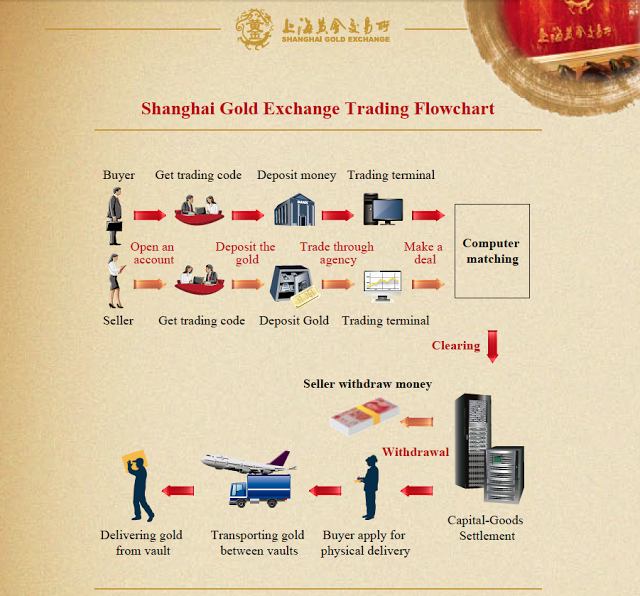