Could it be sie Germans?

Every month the Federal Reserve bank of New York (FRBNY) publishes the amount of gold it holds in custody for 36 foreign central banks and the IMF. After a significant drop in July of 24 tonnes, 15 tonnes were withdrawn from the vaults in August. Germany is the only country, that I’m aware of, currently repatriating gold from New York. This suggest all withdrawals year to date have been shipped to Frankfurt. 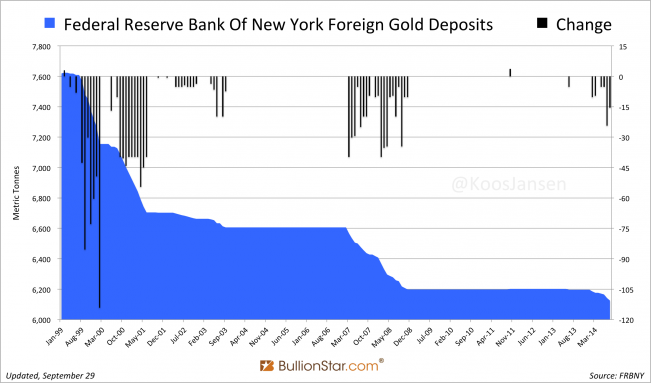 Year to date 70 tonnes of gold have left the FRBNY vaults. Germany’s central bank, the BundesBank, has stated the 5 tonnes of gold they repatriated in 2013 from New York did not meet the London Good Delivery (LGD) standards of 99.5 % purity. Suggesting the repatriated bars could have been coin bars, melted from golden coins that are an alloy of gold and, for example, copper. A long long time ago when gold coins circulated in the economy as money, these coins were an alloy of gold and other metals which made them more durable.

On April 5, 1933, US President Franklin D. Roosevelt signed Executive Order 6102, “forbidding the hoarding of gold coin, gold bullion, and gold certificates within the continental United States", because the Federal Reserve didn’t have enough gold to expand the money supply. Subsequently American citizens were required to sell their gold (coins) before May 1, 1933, to the US government in exchange for $20.67 an ounce, or they would face 10 years of imprisonment. 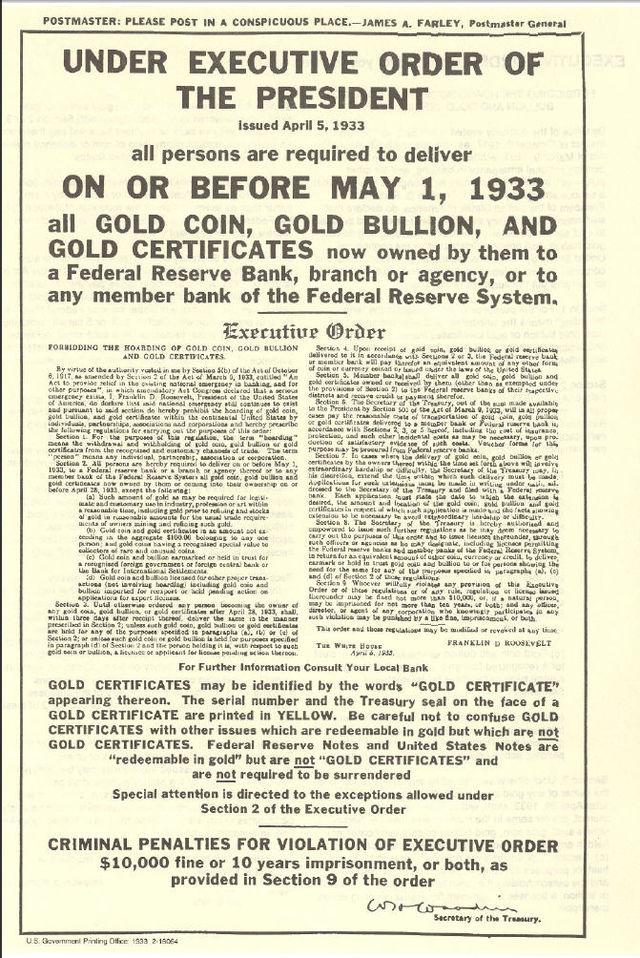 The collected coins were melted into coin bars, bars with a purity no higher than approximately 90 %. These bars were the base for the gold in Fort Knox.

One of my first observations about the gold there, was, you think about modern good delivery bars, the 400 oz bars that are made in Switzerland, think of shiny gold, and these bars at Fort Knox, are…, look like.., dirty gold, with some corrosion on them, and they’re not as yellow.. and you know, so that was one of the first things, is this real gold there? And then you realize, you know, Roosevelt had made it illegal for Americans to physically possess gold coins, and he melted all those gold coins, and that’s what ended up being the initial stock at Fort Knox, and a lot of those coins are 22 carat gold, which then have impurities, and a lot of it wasn’t refined when it was made into these bars that ended up making it into Fort Knox, and so when you take a look at each bar, you realize what history’s behind it, how many coins must have been melted in order to make the bar, and what life stories must have been part of all that.

Carl-Ludwig Thiele, Member of the Executive Board of the BundesBank, explained the low purity of the first shipment from New York in 2013 as follows in an interview on February 19, 2014:

The gold was removed from the vault in the presence of the internal audit team and transported to Europe. Only once the gold had arrived in Europe was it melted down and brought to the current bar standard. Some of the bars in our stocks in New York were produced before the Second World War. It was confirmed after the melting process, as anticipated, that these bars were absolutely fine.

Germany is one of the few counties that ‘recently’ has published the exact whereabouts of it’s sovereign gold. Click here for the list published in 2012. However, they haven’t released a bar list that would expose what type/purities of bars are allocated at what storage facility. 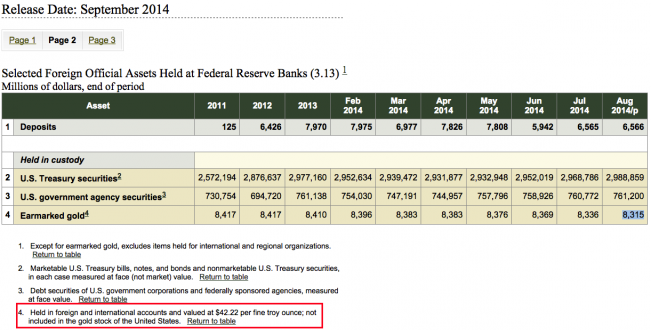 Gold in FRBNY international accounts is valued at $42.22 per fine troy ounce, but disclosed in round millions of US dollars – the error margin is 0.73 tonnes. The higher the gross weight repatriated by the Germans the more precise we can validate the purity of the bars. Though I assume the Germans will only disclose the fine weight of repatriated gold.

Perhaps by year end the Germans will be honest again and tell us if the bars repatriated from the FRBNY did or didn’t meet LGD standards – perhaps not. I will try and research to find out exactly what bars were deposited at the FRBNY by Germany throughout history.

The crux of the matter is this; according to the FRBNY:

All bars brought into the vault for deposit are carefully weighed, and the refiner and fineness (purity) markings on the bars are inspected to ensure they agree with the depositor instructions and recorded in the New York Fed’s records. This step is vital because the New York Fed returns the exact bars deposited by the account holder upon withdrawal—gold deposits are not considered fungible.

If Germany holds mainly LGD bars at the FRBNY, but will repatriate coin bars in the coming years, this gold could be sourced from Fort Knox. Needless to say this all speculation.