Largest Ever Chinese Gold Deposit Has Been Found 2,000m Undersea In Shandong

The largest ever gold deposit in China has been found in the East China Sea, near the Sanshan Islands in the Shandong province, at a depth of 2,000 meters, the People’s Daily Online reported on Tuesday.

“It’s very difficult to locate and set up the drilling platforms at sea,” Ding said. The project manager Zhang Junjin said, “drilling holes into underground rocks that are more than 1,000 meters deep is a big challenge. Normally in China, gold mine prospection is conducted within 800 meters underground. The discovery of a gold deposit lying 2,000 meters undersea provides new drilling technology for future gold mining,” (Quotes by the People’s Daily Online).

At a current gold price on the Shanghai Gold Exchange of ¥225 yuan per gram for gold having a fineness of 9999, the deposit is worth ¥105.9 billion yuan, or more than $16 billion US dollars. However, if the Chinese want to mine the gold at the bottom of the ocean the costs would be very high, assuming they can develop the technology for off-shore mining.

As on-shore gold reserves are globally being depleted, off-shore gold mining initiatives are increasing. In June 2015 The Times Of India reported exploration has begun for mineral deposits and precious metals like gold and silver in the Southern Indian Ocean at a geological junction where three tectonic plates meet near Mauritius. 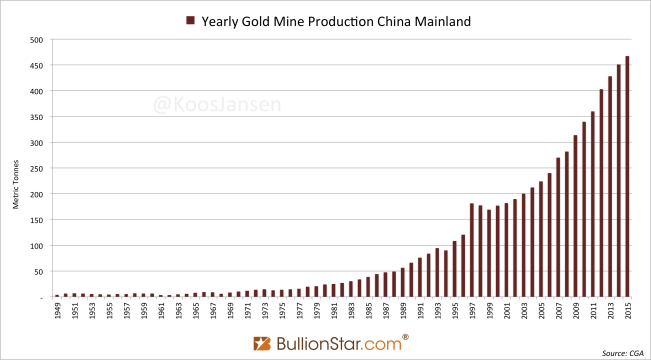 Most notably, Chinese domestic mining has increased significantly since  the late seventies when the country started to open up under the guidance of Deng Xiaoping. It’s being thought that half way the nineties China became a net gold importer. Ever since China has not exported its domestic gold mining output and ramped up gold import to well over 1,200 a year since 2013.

Estimated above ground gold reserves in China are at least 13,743 tonnes, of which 1,723 tonnes are owned by China central bank the People’s Bank Of China, and 12,021 tonnes owned by the private sector.