Today new data came out from the Hong Kong Census and Statistics Department. This data covers Hong Kong import, export and re-export of goods to June 2013. All of the charts about Chinese and Hong Kong gold trade I publish on this blog are based on these data sets. The charts show exactly how much is traded by Hong Kong, and they give a rough estimate on total gold trade by China mainland as most of the mainland’s gold trade goes through Hong Kong. I will update all charts every month.

For my charts I combine the following gold categories:

For clarity, these charts are all based on trade numbers from Hong Kong. With these numbers we know how much gold ends up in Hong Kong itself (import minus export) and how much gold Hong Kong trades with other countries (net import or export). The “China net inflow charts” are only about the amount of gold that China mainland net imports through Hong Kong.

Lets start with Hong Kong gold trade. We can see that massive amounts of gold are being traded. In 2012 1000 tons were imported and more than 900 tons were exported, which left 70 tons in Hong Kong. Year to date total Hong Kong net gold inflow is already 222 tons – bear in mind this is a region of 1100 km2 with a population of 7 million people. 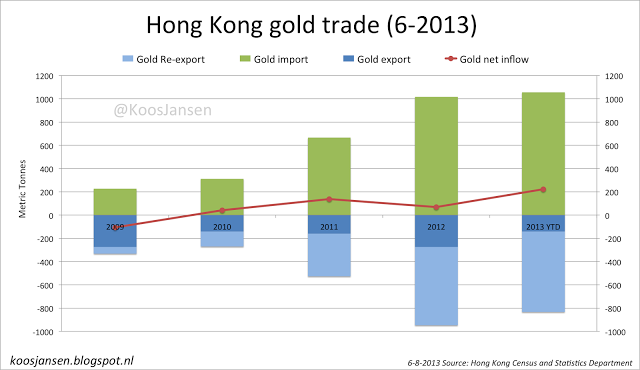 Most of the gold Hong Kong exports goes to China mainland as can be seen in the following charts. In June the mainland net imported 101 tons from Hong Kong, YTD 493 tons. 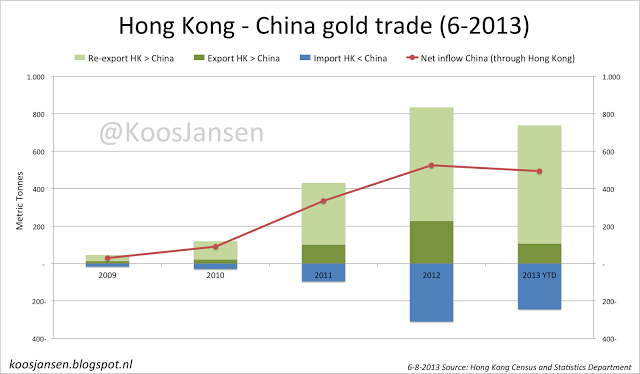 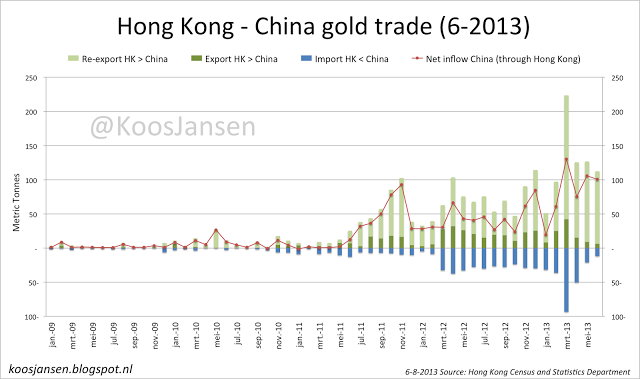 The biggest supplier of gold is without a doubt Switzerland that exported more than 100 tons to Hong Kong in June alone (indeed, that’s exactly what the mainland imported in June from Hong kong) and 374 tons year to date, exports to the Swiss only amounts 235 kg year to date.
It wouldn’t surprise me if Hong Kong imports from ALL sorts of sources next to Switzerland (CH), including central banks. 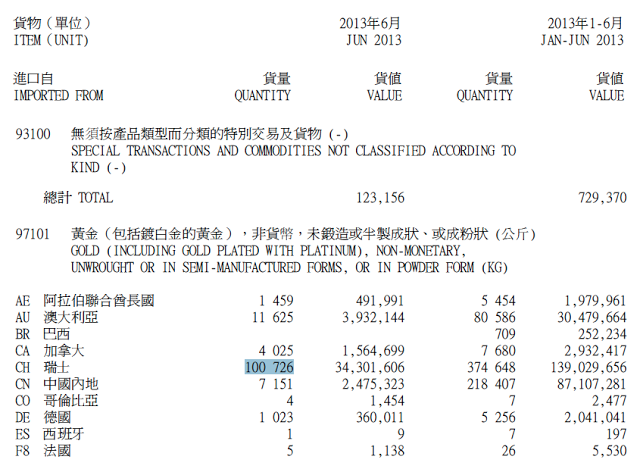 Hong Kong and China mainland combined net gold inflow year to date is a whopping 716 tons.
I was about to end this post with “Just my thoughts”, but actually these are all facts..
Sleep well mainstream media,
In Gold We Trust