India has a love for gold but the country has no goldmines, all demand has to be satisfied by import. Gold is their second biggest import after oil. Due to a growing trade deficit and a weakening Rupee the RBI (India’s central bank) is desperate to curb gold’s luster. In January they raised gold’s import duty from 4% to 6 %, in June to 8 % and in August to 10 %.
On August 28, 2000 one troy ounce of gold could be exchanged for 12,200 Rupees, on August 28, 2013 it took 97,000 Rupees. That’s a devaluation of 795 % in 13 years. Because the value of the Rupee has lost significantly against gold in the past decades, the Indian people (1.2 billion) know how to store their value – they save in gold. 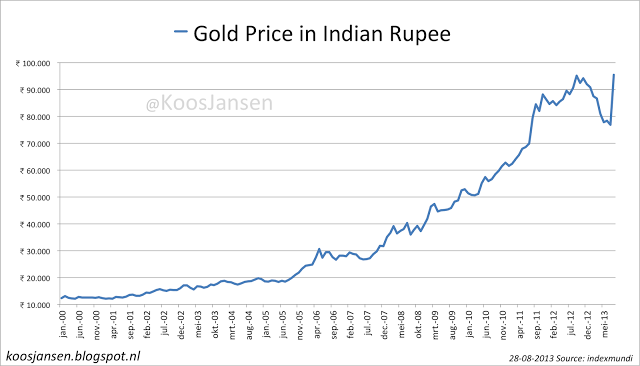 This long term devaluation of the Rupee and the price drop of gold in April has fueled Indian demand and thus imports. In May India imported 165 tons of gold, a record this year that brings the total of the first 5 months to 586 tons. The tax hikes stimulate smuggling gold into India, which make official import numbers even lower than actual.
This data is form the DGCIS that publishes a trade summary every month, export is not disclosed.
Silver imports are also strong this year, caused by the import tax on gold. Many shift to silver to avoid high premiums. Year to date India imported 2500 tons, in May alone 891 tons.