India’s customs department, the Directorate General of Commercial Intelligence & Statistics (DGCIS), just released the QUICK ESTIMATES FOR SELECTED MAJOR COMMODITIES for December 2014. According to DGCIS the figures for December are provisional and subject to change, however, I’ve been tracking these quick estimates for months and they are reasonably accurate – compared to the official numbers that lag a few months.

Bullion Bulletin released a report in 2014, called An Empirical Study Of Silver Markets In India. In the intro it states:

Why has the silver import into India increased in 2013? We started talking to the industry. We could identify two causes – investment demand and jewelry demand. Investment demand was largely due to demand switch from gold and relative attractiveness of silver to gold.

The quick estimates do not disclose any silver export; the official numbers do, but these are negligible as we can see in the next chart. 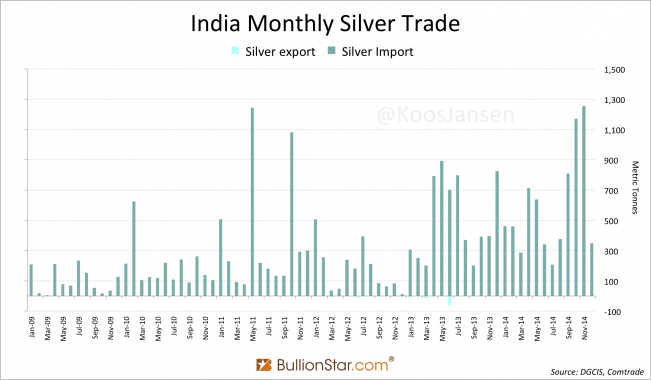 Note, the previous charts are build from numbers on silver as disclosed by the DGCIS, I do not know how much silver is exported in the form of jewelry or silverware. There are numbers available about the value of silver jewelry exports from India, published by the Gem & Jewelry Export Promotion Council (GJEPC), however these values can capture fabrication costs, gems and other precious metals. There for I don’t feel comfortable deriving exported silver tonnage from GJEPC data.

Large inflows of silver into India are often supplied by the UK; we can see a clear pattern if we compare India gross import with UK net export to India.

Meaning the UK, the London Bullion Market, is drained from silver by the East just like it’s drained from gold by the East. I don’t see any silver shortages in the near term in the UK, but I’ll keep an eye on it.