“Rupee" comes from r?pya, a Sanskrit term for silver coin 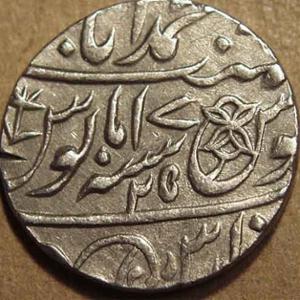 While silver has been widely used as money in history, at the beginning of the 19th century gold became the dominant metal in trade. At the end of the 19th century central banks erupted around the world and began holding gold in reserve to back their currencies, the international monetary system in this period is known as the classic gold standard. When the last remnants of the gold standard were officially left behind n 1974, and the world was on a fiat standard, central banks held on to their gold. This can only be explained as insurance in case the fiat standard wouldn’t succeed, concomitant admitting there is a reasonable chance fiat money will fail.

Nowadays central bankers sporadically tell us about the true function of gold in the international monetary system. This is only logic if one realizes they (/the US) preferred to minimize the role of gold, in the hopes the fiat standard would provide them maximum flexibility to manage the monetary system. Jelle Zijlstra, president of the central bank of the Netherlands from 1967 to 1982, wrote in his autobiography of 1992:

Gold as the monetary cosmos’ sun.

To analyze gold’s gravity in its ultimate role as the sun in our monetary system I try to be acquainted with all the planets in orbit, black holes nearby and comets crossing the solar system. For example: foreign exchange markets, inflation, quantitative easing, too big to fail banks, derivatives, oil, geo-politics, the media, technical analysis, commodities and silver. I certainly do not pretend to be an expert in all fields (the cosmos), but to make a long story short; while always attributing more importance to gold I recently decided to pay more attention to the global silver market. Few events happen in isolation these days and I did some interesting findings with regard to the silver market worth digging into. In this post we’ll be examining some data from India.

Because of the pressure on the current account deficit the Central Board of Excise and Customs of the Indian Government, raised the gold import duty in January 2013 from 4% to 6 %, in June to 8 % and in August to 10 %. The silver import duty was raised in January 2012 from 1,500 Rs/Kg to 6 % of the silver price and in August 2013 to 10 %. Since the import duties, or tariffs, were raised, the price of gold in India developed a higher premium (excluding the import duty) than silver, as can be seen in the charts below. 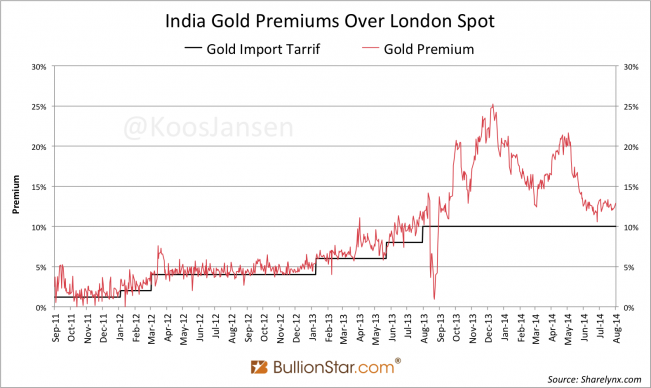 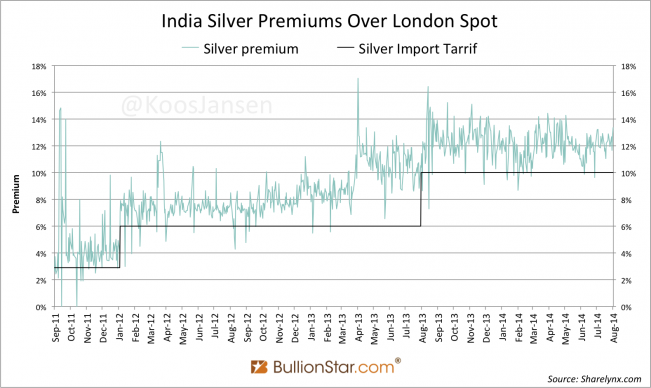 For many Indians this made silver an attractive alternative to gold. In May 2014 the average gold premium in India was 9 % (excluding the 10 % import tariff), the average silver premium was 2 % (excluding the 10 % import tariff). Silver being relatively cheaper to international prices results in higher demand and elevates official import. Presumably silver is more difficult to smuggle, in May silver was 66 times less expensive than gold, which makes any fiat amount in physical silver 122 times larger in volume than physical gold, given gold’s density is about twice as high as silver’s density. In May 1,000,000 Rupees equaled 22 cm3 gold and 2,500 cm3 silver. The amount of imported silver disclosed by the DGCIS, India’s customs department, is likely to be silver bullion, not silver ore, silver paste or silver as a by-product in lead or zinc concentrates. From the website of the Central Board of Excise and Customs: 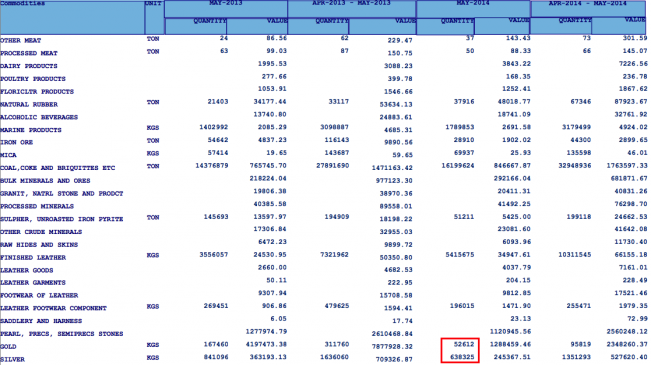 The tonnage imported calculated from the value in Rupees is 604 tonnes. Though this way of calculating tonnage from monthly average prices isn’t very accurate, it does confirm the purity of the silver imported. How much of the imported silver is exported in the form of jewelry or industrial products I do not know at this point.

Gold gross import in May was 53 tonnes, gross export (which is required to be 20 % of gross import, this is referred to as the 80/20 rule implied in August 2013) was 9 tonnes. Gross import was up 22 % m/m. However, official gold trade numbers are highly distorted as most gold is smuggled across the border. From Jayant Bhandari:

Some of it comes via planes (via Dubai and Singapore, legally and illegally), some through the Bangladesh border and a minor part through Nepal and Pakistan. I don’t think it is worth the risk to bring it via China. The Bangladesh border is the easiest, a few dollars of bribe to the army guys does the job.

I often hear analysts saying that there is shortage of gold in India. Incorrect. It is more liquid a commodity than water is. The spread is so thin that you can often buy and sell at the same price — the trader makes his margin from making jewelry.

Before the 90’s, import of gold was heavily regulated and carried a massive customs duty. Of course, in those days most gold arrived in India through smuggling. A big mafia had built up in Mumbai and Dubai, mostly catering to India’s gold demand. Two things happened as a result: the Government lost all prospects of earning revenue from gold imports, and most importantly, smugglers ran a ruthless empire in several Indian cities, particularly in Mumbai, controlling human-trafficking (with horrible consequences for poor girls and children) and financing the real-estate and the film industries. They were the unofficial rulers of Mumbai. When restrictions on gold were eased in early 90’s under pressure from IMF, the same smugglers took the shape of what got to be known as terrorists. (All this should not sound strange to those who understand the history of prohibition in the US)

The current restriction and heavy custom duty on gold will repeat the consequences of the era before the 90’s. But really in an irrational world where rhetoric has more value, who cares about the real consequences? Indeed, based on my many conversations with traders, all gold that India needs is already coming through smuggling. And smugglers want restrictions on gold imports to stay in place — they haven’t had it this easy for a long time. 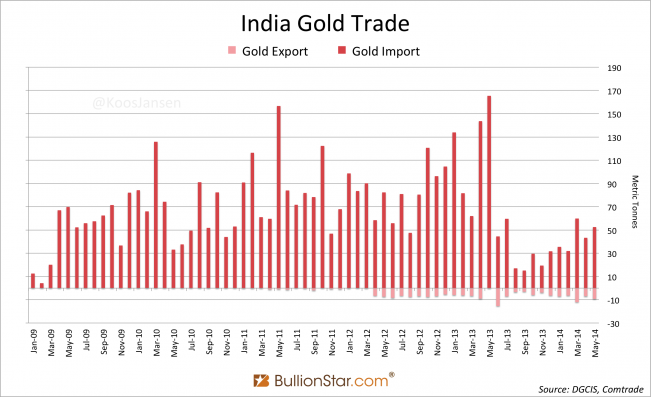