In January 2013 India’s central bank, the RBI, raised gold’s import duty from 4% to 6 %, in June to 8 % and in August to 10 %. Another rule came into life on July 22  which made it mandatory for shippers to set aside 20 percent of shipments for re-export. All this policy has finally engendered some results; gold is being smuggled across the borders and silver import is exploding.
In June official gold import came sharply down to 44 tons from 165 tons in May, – 73 % m/m, – 20 % y/y, the lowest amount that came in since November 2010. The festival season in India runs from August to October followed by the wedding season from November to December. With official import as low as in June we know gold will be smuggled to India at multiples from the numbers giving to us by the authorities. Year to date India officially imported 631 tons of gold. 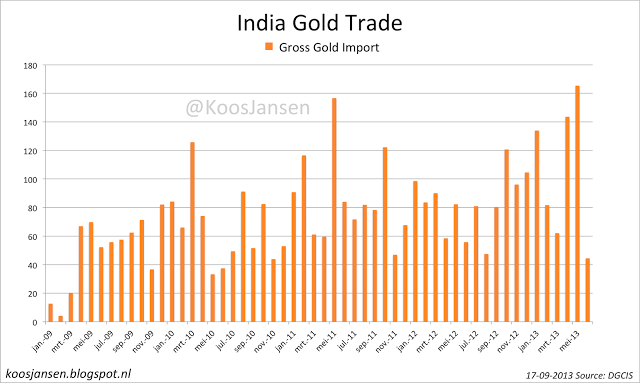 The import duty on gold was raised because gold import was hurting India’s current account. A lot less money was spend on silver import which spared the latter from an import duty. Not surprisingly this made many Indians buy silver instead of gold. Silver import in June was 702 tons, down from 891 tons in May, – 21% m/m, + 288 % y/y. Year to date silver import stands at 3145 tons. 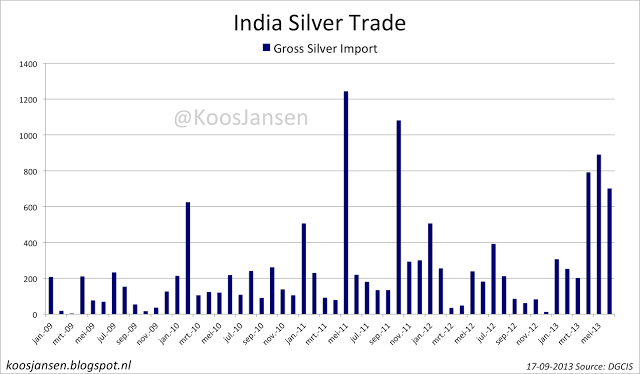 The data in this post comes form the DGCIS that publishes a trade summary every month, export is not disclosed.