How Much Are Chinese Gold Reserves?

There has been much speculation about a slide from chairman and secretary-general of the China Gold Association Zhang Bingnan presented at the LBMA forum in Shanghai June 25, 2015. The slide states Chinese gold reserves are 9,816.03 tonnes, however, this refers to in ground mining reserves.

I have never received so many emails and tweets as for inquiries about this slide, hence a post to debunk the rumor. Let’s have a look at the slide; clearly we can see Zhang talks about the Chinese mining industry, at the top it says, “<1> Chinese gold mining guarantee the steady supply of world gold". 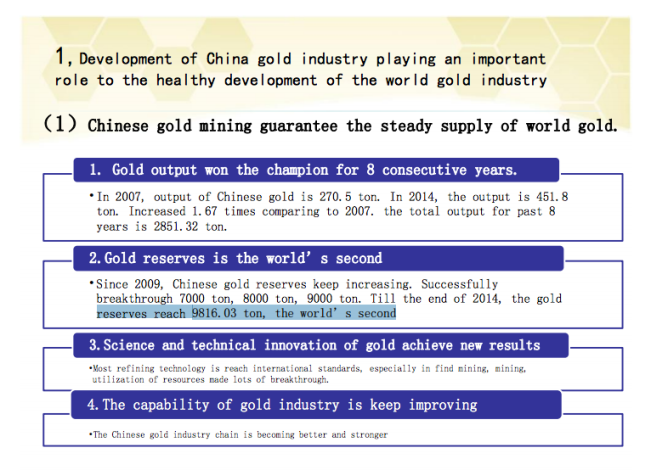 While talking about mining he notes Chinese reserves keep growing; after 2009 reserves crossed 7,000 tonnes, then 8,000 tonnes, 9,000 tonnes, reaching 9,816.03 tonnes by the end of 2014, “the world’s second”. From the context we must conclude he’s talking about mining reserves, additionally he states 9,816 tonnes are the world’s second, which wouldn’t be true if this amount would refer to official gold reserves, as the US Treasury officially holds 8,134 tonnes.

In ground gold is also referred to as reserves, just as above ground gold. From a few years ago, when China used to publish detailed reports on their gold industry in English, I found an overview from mine reserves per Chinese province.

At the bottom of the overview we can see mining reserves grew from 6,328 tonnes in 2009 to 6,865 tonnes in 2010. These numbers match what Zhang mentioned. Apparently the China Gold Association estimates proven reserves have grown into 9,816 tonnes by the end of 2014.

By and by, when the PBOC will finally update its official gold reserves they won’t do it through a slide on a conference. Likely the event will attract proper Chinese media attention.