Guest Post: I have a Theory On The Swiss Franc

I have had a theory about markets for as long as I have watched gold. The theory is everything is about gold. Well, maybe not everything but close enough. Which is why the move by the SNB had me look at the charts. And those charts tell me a story that is very different from the official one. Now please understand I have zero proof outside of the charts, so this is speculation on my part but it is reasoned speculation as you will see.

I believe the SNB was massively short gold and dropped the peg to cover their short. Here is why I believe it. 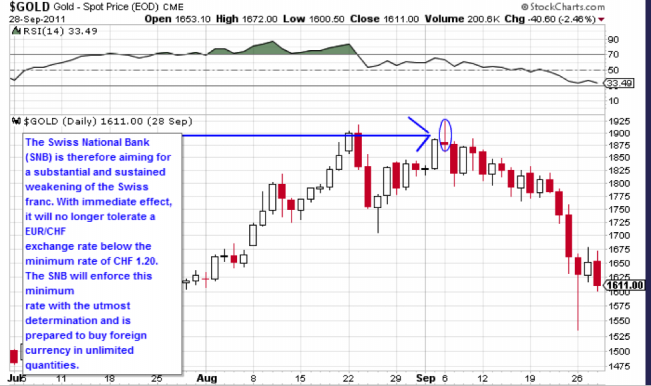 What we have established is there is some tie between gold and the SNB. It could be a function of a consortium of CB balance sheets but the top in gold and the peg are connected.

Fast forward to 2014 and we have the Swiss referendum where the Swiss equivalent of Yellen, Thomas Jordan took to the pulpit claiming gold is a mistake. He was quickly backed up by a shrill formerly of Citi claiming gold is a 6000 year bubble. Bottom line from all of this is the SNB did not want to buy gold. Even though the amount needed and time allowed were very reasonable, Jordan wanted none of it.

That takes us to 2015. The SNB announced they made $38 billion in 2014. Per Bruce Krasting that total was 50% of the Swiss government budget. Does that sound like a CB that is in trouble to you? What we were told is the SNB capitulated on the peg because Draghi was about to crush the Euro and coupled with inflows from Russian oligarchs the SNB was under enormous pressure. Again, that may indeed be the case but they had just made $38 billion in 2014.

But something has happened in the markets the past several weeks. Gold started to break out as we detailed in previous writings. Gold in Euros led the way and exploded out of a base.

Next we have gold in Yen.

And of course gold in dollars broke out of the bullish broadening wedge and has made the big move we showed was imminent due to the BB pinch.

That leaves me to the chart of gold in Swiss Francs, but first a few notes. Koos Jansen has done an amazing job in deciphering the physical flow of gold from West to East. In a recent piece he noted that amount of gold that is imported into Switzerland, refined and then exported. If any country knows about the flow of gold it is Switzerland. They are the refining hub. Did the SNB look at the data and realize that the physical offtake was reaching levels where it could no longer be ignored?

Lastly, there is the issue of technical analysis. Why I would not consider myself an expert I have watched the charts of the metals for over fourteen years and I do have an idea of patterns and how they play out. What I am looking for from the gold community is the following. Can anyone show me a chart of gold priced in any currency at any time that saw a clearly defined breakout after a lengthy consolidation fail and fail so spectacularly?

The chart shows a period of eighteen months where the price of gold denoted in Francs went sideways. And, it followed every other chart of gold and broke out convincingly. What happened next is a failure and for gold, which is about as technical a trade as there is in the markets, this was rare, very rare. Is it unprecedented? It could very well be. How technical? Look where the price stopped on the plunge. Amidst all the chaos I am supposed to believe that those two lines which are very close to parallel are a random occurrence? You may choose to believe that but in my experience they are nothing of the sort. 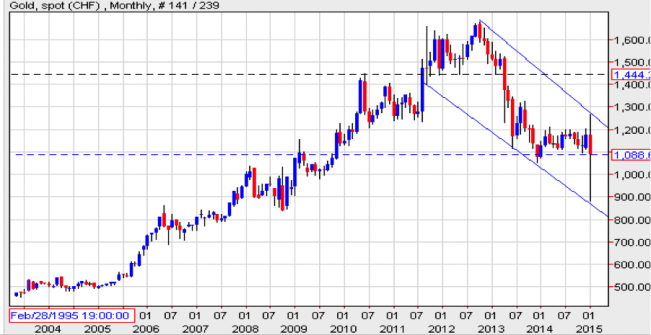 It could all be one giant coincidence but I don’t believe it for a second. In my humble opinion the SNB was short gold and they needed to cover and cover they did.