Silverdoctors published an article on April 9, 2014 titled: PUTIN SENDS THE WEST A GOLDEN MESSAGE: CENTRAL BANK OF RUSSIA CHANGES LOGO TO GOLDEN RUBLE. The article presents a “Google Translate" from the Russian website 1prime.ru and states the Russian central bank has changed it’s logo into a Golden Ruble. From Silverdoctors:

According to reports from Russian media, Putin appears to have sent the west a golden message in the aftermath of JPMorgan unilaterally deciding to block an official Russian wire transfer, as the Central Bank of Russia has introduced a new logo, which just happens to be a gold ruble.

Officials stated on the new logo: Golden Badge of the Russian national currency, officially adopted by the Central Bank of Russia, will symbolize a sign of stability and security of the ruble gold reserves of the country.

The article suggests this to be the new logo:

Moscow, march 30- RIA News. A symbol of the Russian ruble appears on sunday in front of the office of a Russian joint-stock bank, organizers said.

The action took place at 15.00 in front of the bank Perevedenovskom lain in the center of Moscow (near metro “Baumanskaya").

A golden badge of the Russian national currency officially adopted by the CBR will symbolize a sign of stability and security of the ruble gold reserves of the country – said the organizers.

Thus participants installation intends to express support to the Russian bank, who decided to work exclusively for the domestic market and only with one currency, the national currency of the Russian Federation, the Russian ruble.

US authorities in response to accession of the Crimea to the Russian Federation imposed sanctions on 20 Russians and Russian banks, including the thirty largest in the country. Consequence of the sanctions was the refusal of the international payment system Visa and Master Card to conduct non-cash transactions through Russian cards, worsening outlook on the banks and suspension of rating actions. On friday, the Bank announced that it will only work in Russia, and only with rubles.

The symbol of the Russian ruble, the letter R with a horizontal line, was approved by the Central Bank sovdirom in december 2013.

Im fully aware that “my" translation is far from perfect, though we must conclude the message the original article contains is different from that of Silverdoctors. What actually happened was that activists supporting their banks in the fight against US sanctions, build a golden colored Ruble symbol out of wood and revealed it in front of a commercial bank, as we can see in the picture below. And no, I don’t think Putin funded this action. Here is more information. 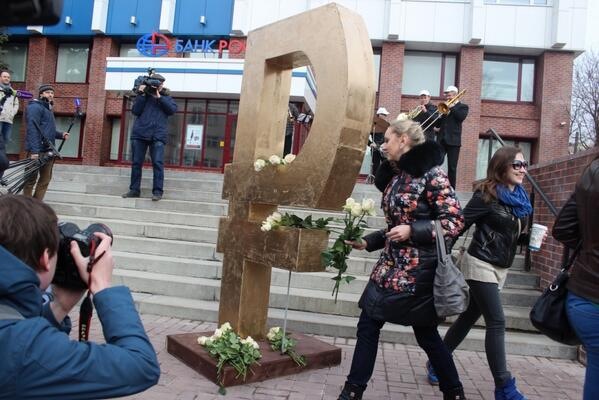