The other day I saw a chart in a video from Mike Maloney on how much gold we know is held in China. It inspired me to make my own version of it.

I have trade data from Hong Kong through which we know how much gold goes in and out of the mainland – based on the assumption that all gold import and export goes through Hong Kong. This data set starts in 2001, so that’s where my chart will begin because in theory all gold held in China could have been exported before 2001. 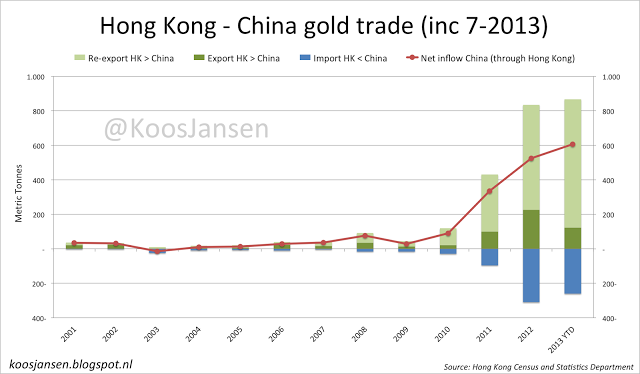 In 2001 official reserves of China were 498 tons, in the same year domestic mine production was 175 tons and net import was 35 tons, so year end 699 tons of gold were held in China; that’s our base. Starting from here I added mine production plus net import to every past year which resulted in the following chart. I did not adjust the official reserves in the chart because those could have been filled by import or mine production.