Thomson Reuters GFMS, one of the leading consultancy firms regarding precious metals supply and demand data has recently released the GFMS Gold Survey 2014 – Update 2. From the report:

Thomson Reuters’ supply and demand data are collected and collated by our team of research analysts based in Australia, China, Europe, India and the USA within an extensive field research programme which involves interviewing stakeholders across the supply chain in every market and utilizing the unique data sets available to us after researching the market continuously since 1967.

All this information, including mine cost profiles, analysts “view of the field”, disaggregated supply and demand data back to 2000, as well as base case and two alternative scenarios underpin price forecast for one, three, and ten year periods and are now available on Thomson Reuters Eikon.

For the ones that don’t know, Thomson Reuters Eikon is a data terminal that costs you something in between $800 and $1,800 a month, depending on how many bells and whistles you prefer.

The section in the GFMS report that shows gold trading volume on the largest exchanges of the planet looks like this: 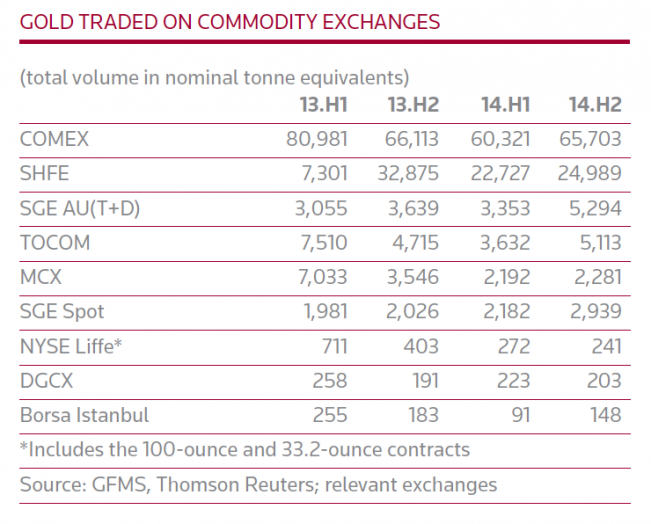 The table is obviously meant so readers can compare the gold volumes traded on the major exchanges; all data is computed into metric tonnes. The COMEX data is correct, the CME publishes gold futures volume as number of contracts, when I multiply all contracts traded in 2014 by 100 ounce, which is the size of one contract, and divide the total amount of ounces by 32151, the total tonnage is 126,007. (Just about the same as GFMS reports.)

Then, the Shanghai Futures Exchange (SHFE), the primary gold futures exchange in China. One gold contract/lot on the SHFE equals 1 Kg. The SHFE publishes gold futures volume as number of contracts, when I add all contracts traded in 2014 and divide the total amount by 1,000, the total tonnage is 47,500 tonnes. Seemingly the same as GFMS reported. However, volume on the SHFE is counted double-sided, or bilaterally. From the SHFE:

There for the total tonnage has to be divided by 2 if compared to COMEX volumes. The actual total tonnage traded on the SHFE in 2014 was 23,750 – counted unilaterally. GFMS has effectively double counted SHFE gold trading volume. This way GFMS has also disclosed all data from the SGE incorrect – Au(T+D) and the spot contract. From the SGE:

The Volume [Kg] and Amount are calculated bilaterally.

The open interest and turnover on the SHFE and SGE are counted bilaterally as well. Additionally, take note I’ve written on August 27, 2014, GFMS was making exactly the same mistake on their silver numbers, in the World Silver Survey 2014: 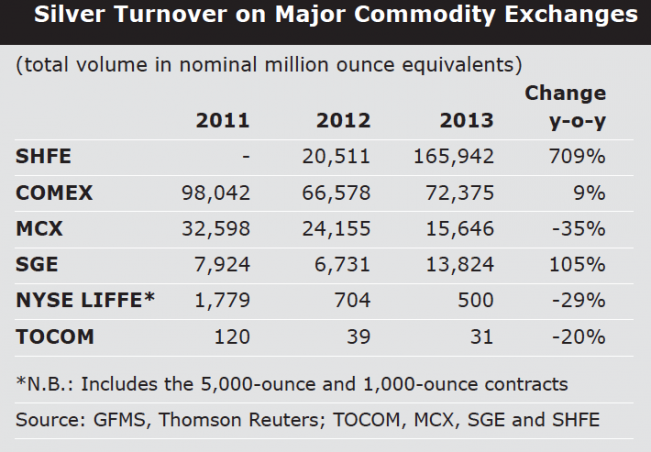 Imagine you pay $1,800 a month for an Eikon terminal that feeds you inaccurate Chinese volume and open interest data. Previously I noticed an error in the Bloomberg terminal that discloses the Chinese price of silver including 17 % VAT, and thus feeding false data.

Of course it’s anyone’s choice to decide what data to use or how to interpreted data, this post is merely meant to share my view on Chinese precious metals trade data in a effort to help investors to get a better perspective on global markets.