Last week we learned UK gold exports to Switzerland were to 797t in the first six months of 2013. In Part 1 I speculated on the possibility if this gold eventually ends up in China.

For decades Switzerland has been a major gold trading hub and it has an unprecedented refining capacity. “In an average year Switzerland refines about 70 per cent of world gold. If you look at the refineries on the Good Delivery List, six have 90 per cent of the volume. Four of them are based in Switzerland. As a rule these foundries get the gold from their customers and refine it to the standard grade of purity. The customer then decides whether to take the gold back or sell it on the market or to the refinery,” said Frédéric Panizzutti in 2012 (spokesman of MKS, a Geneva-based company which specializes in gold trading and which owns the Pamp refinery in Castel San Pietro)

At this moment the biggest demand for gold comes from China as we can see from the Shanghai Gold Exchange delivery numbers, published every friday on their Chinese website. In the first six months 1098t have left the vaults, which is 80 per cent of world mining production in that period. Because China is not the only (Asian) country demanding physical gold, total world demand can’t be supplied by total world mining. Somewhere on the globe gold stocks have to be drained to meet physical demand.

Now let’s look at the 2002-2012 gold trade numbers from the Swiss Customs Administration (published each quarter) in the chart below. We can see that:
– Yearly imports exceed exports with an average of 45 % (in this period 5800t were net imported into Switzerland).
– Import and export numbers roughly correlate with the price of gold – increasing from 2002 until 2011, and than dropping in 2012. 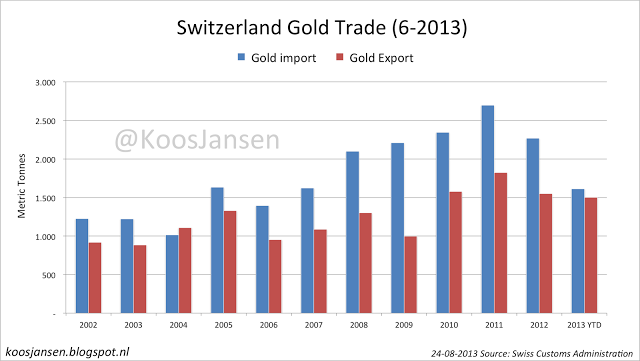 These trends are breaking in 2013 H1 as the Swiss have exported 1500t and imported 1600t. Trade is up on a falling gold price, and exports are balanced with imports. This could mean that the gold that comes in is remelted and immediately been sent forward – the 797t imported from the UK are exported in the same period, or Swiss gold stocks have been used for exports. In any case it’s very likely that Swiss gold trade is part of the supply chain to the Asian market, as these are numbers that fit demand from the east. GLD lost 380t in H1, this and “a bit” more were shipped to Switzerland (797t in total), remelted, and than brought to the Shanghai Gold Exchange. The Chinese mined 200t in H1, also sold through the SGE, which adds up to (+797) a 1000t. Almost the 1098t delivered.

Only the spot price of gold + 0.89% regardless of quantity bought!
Add to Cart