Below is a chart I published a few days ago on this website, this chart was INCORRECT. 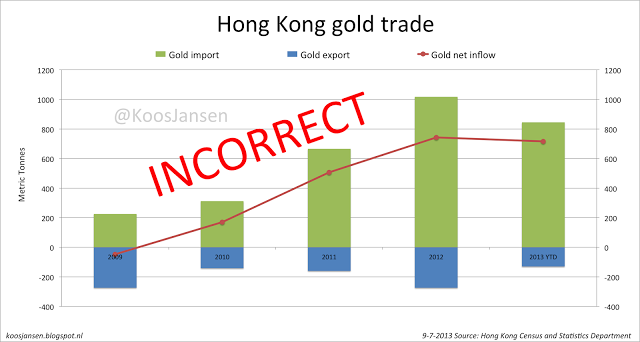 Before making this chart I was misinformed on the definition of “re-exports". When double checking my data with the Hong Kong Census and Statistics Department I learned the true definition of re-exports.

Re-exports are defined as goods which have been imported into Hong Kong and leave the country again after no (or virtually no) further processing.

This is where I went wrong, I assumed re-exported goods were not being imported at first.

For the above chart I calculated NET inflow as import minus export. According to the Hong Kong Census and Statistics Department it should be import minus re-export to show NET inflow/import of a certain good. From where I stand now I think it’s best to subtract re-export and export from import because of the nature of gold. No matter how it’s processed it will always stay… gold. It never dies, it can be bought and hoarded, than melted into another form, exported, sold, further processed, stored, worn, collected, sold again, changes are it will never vanish. To me it doesn’t matter if gold is in ore, coin, bar or powder form when it crosses a border, it’s all the same – gold is gold. Below is a new chart I made showing Hong Kong NET gold inflow, import minus re-export and export. 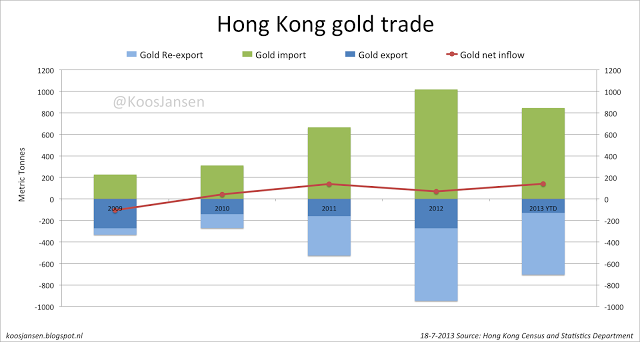 As you can see this paints a completely different picture.

Also note, Hong Kong is a special administrative region of the people’s republic of China, but there is a border in between the two and they use a different currency, the Hong Kong dollar and the Chinese Renminbi. In terms of trade it’s a different country. As I have understood from various other blogs and newspapers most of China’s gold imports come in through Hong Kong. I have not yet found import and export data of China itself, and I doubt if I ever will, so until that time I can only use the data sets from Hong kong for showing how much gold China imports. Probably China is also importing gold via other countries. Below is the chart of China NET gold inflow, based only on it’s trade with Hong Kong. 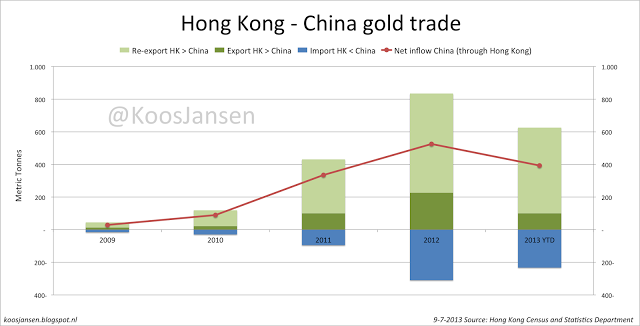