Withdrawals from the Shanghai Gold Exchange vaults, which equals Chinese wholesale demand, in week 34 (August 18 to 22) accounted for 46 metric tonnes, the highest weekly amount withdrawn since late February (25 weeks ago). Year to date wholesale demand stands at 1209 tonnes. It’s worth stressing that this number includes gold that is recycled through the SGE. 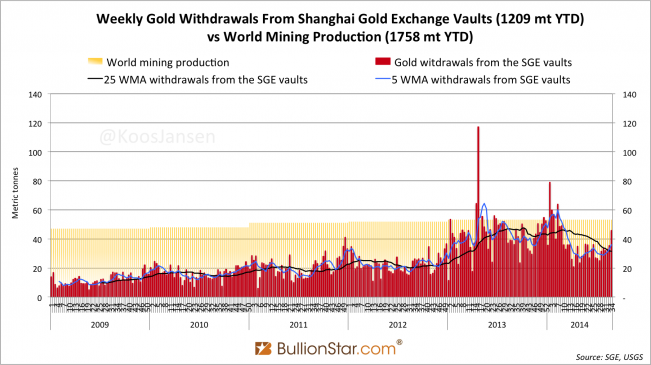 By using the following simplified equation:

We can calculate how much gold China approximately has imported year to date. Scrap, or recycled gold, was 229 tonnes in 2013, we will use this number for 2014 as well, mine output is estimated to be 451 tonnes in 2014. With these numbers we can fill in the blanks:

Net import would be 764 tonnes year to date, domestic mining output 278 tonnes and recycled gold 150 tonnes. If we subtract recycled gold from SGE withdrawals the outcome is 1059 tonnes, this is the amount net added to private reserves in China year to date.

Remarkably, SGE chairman Xu Luode measures Chinese consumption demand by additions in private reserves and does so using the same simplified equation just shown. In a Speech Xu held May 15, 2014, at the Fourth Commercial Bank Gold Investment Forum he stated China mined 428 tonnes and imported 1540 tonnes in 2013, adding up to nearly 2000 tonnes. At the LBMA forum in Singapore June 25, 2014, Xu stated Chinese consumption demand of gold hit 2000 tonnes in 2013. Withdrawals from the SGE vaults accounted for 2197 tonnes in 2013, which means Xu measures Chinese demand as:

The same equation can be used to calculate total private reserves in the mainland, as shown in the next chart (click here for a detailed explanation of how this chart is compiled). Combined with estimated official reserves total Chinese gold reserves stand at 15,014 tonnes, as of August 22, 2014. 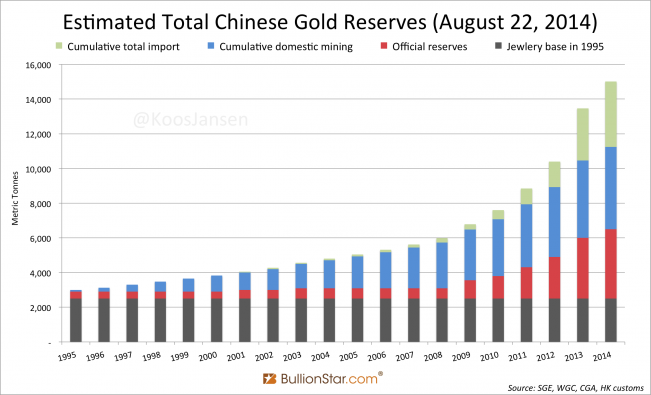 The amount of official reserves is more difficult to track. As a guide I have used A Study on Optimal Scale of China Gold Reserves, by Zhang Bingnan, Vice Chairman and Secretary-General of the China Gold Association. His study was published in 2012, prior to the crash in the price of gold in 2013 that significantly increased Chinese gold purchases from the private sector (have a look at the first chart), and likely from the official sector as well.

Back in 2012 Zhang calculated the official gold reserves of the PBOC in 2020 should be in between 5787 and 6750 tonnes. Based on this study and market events since, I estimate the PBOC holds 4,000 tonnes at this moment. Concurrently emphasizing I have no hard data to support this estimate, in contrast to Chinese private reserves which can be monitored through SGE withdrawals. 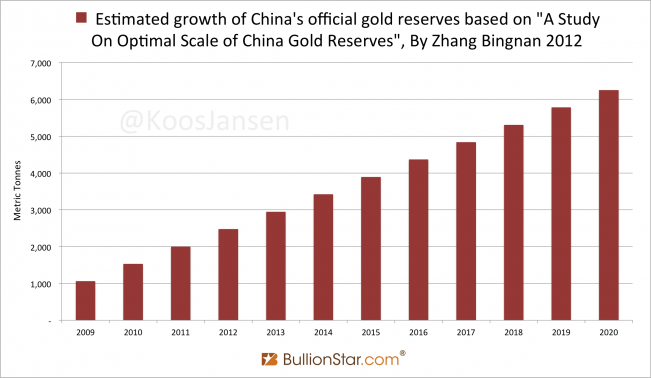 Silver remains scarce in Shanghai; futures are trading in backwardation since August 6 on the Shanghai Futures Exchange, where silver inventory has dropped to a record low of 95 tonnes. 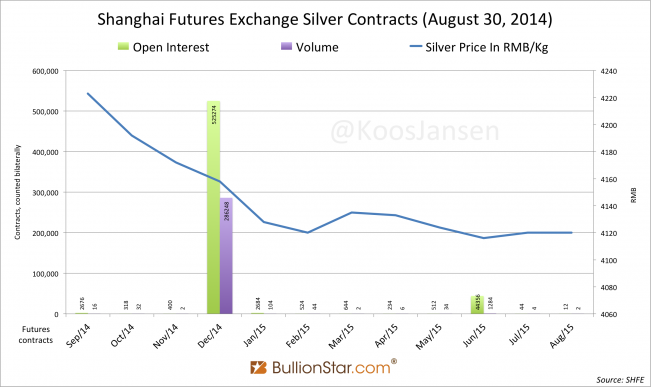 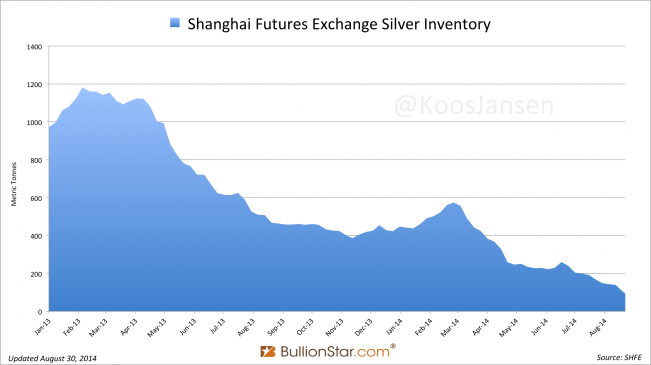