As I mentioned last week, January is the time of the year for the Chinese to buy golden gifts for their love ones. And that is exactly what they are currently doing en masse, according to the latest data from the Shanghai Gold Exchange (SGE).

An astonishing 61 tonnes have been withdrawn from the vaults in SGE trading week 1 (January 5 -9), the strongest week since early October 2014. SGEI volume was very little at 3.5 tonnes; meaning withdrawals from vaults in the mainland must have been at least 58 tonnes. (Read this post for a comprehensive explanation of the relationship between SGEI trading volume and withdrawals.) 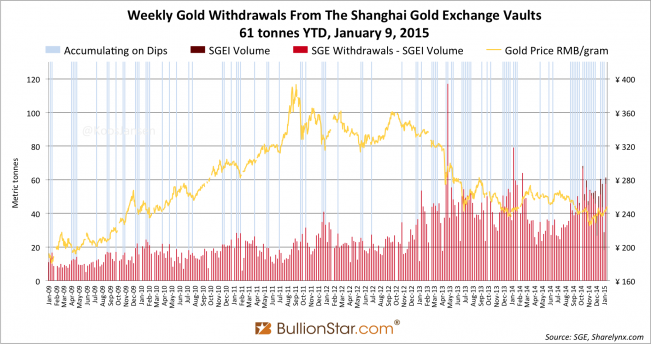 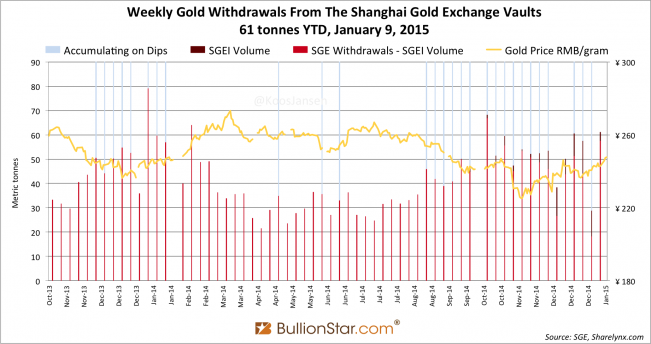 As most of Chinese gold demand needs to be sourced from abroad (import), this is draining global gold inventory. One of the largest suppliers to this market is the UK, home of the London Bullion Market. It remains to be seen how long the UK can export to China – the question is will all gold from London be shipped to the Orient, or will it stop before they’re empty. From the LBMA website, January 2015:

There are seven custodians offering vaulting services in the London bullion market, three of whom are also clearing members of the LBMA (Barclays, HSBC and JP Morgan). There are also four other security carriers, who are also LBMA members (Brinks, G4S Cash Solutions (UK), Malca Amit and ViaMat). The Bank of England also offers a custodian service (gold only). In total it is estimated that there are approximately 7,500 tonnes of gold held in London vaults, of which about three quarters is stored in the Bank of England.

In total there is approximately 9,000 tonnes of gold held in London vaults, of which about two thirds is stored in the Bank of England.

This is not an exact scientific way of measuring changes in London’s gold stock over a given period, but it is significant. According the Eurostat the UK has net exported 1,871 tonnes from January 1, 2013, until November 31, 2014. Let’s see how this will play out this year. 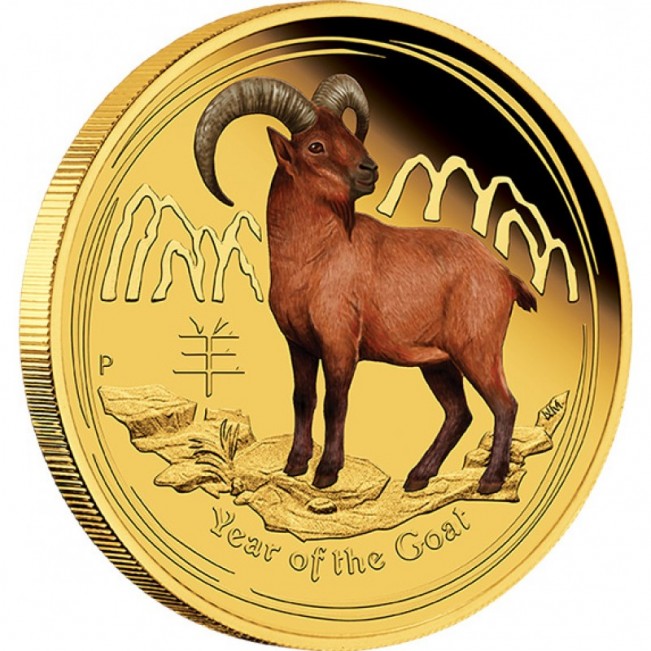