Where to begin. Much has happened this week in the Chinese gold market; on wednesday the Shanghai Gold Exchange (SGE) released multiple rule books written in English describing every detail on the workings of the SGE and its brand new subsidiary the Shanghai International Gold Exchange (SGEI). Finally the world can read everything about the Chinese exchange that is the strongest force in the physical gold market, but was widely misunderstood because of the language barrier. Though having channeled unprecedented amounts of physical gold into China mainland the SGE has been enjoying little coverage in the mainstream media. 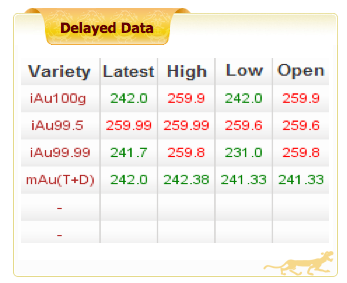 The SGEI in the Shanghai Free Trade Zone facilitates physical gold trading in renminbi for international traders. This is a major step forward for the internationalization of the renminbi and its influence on the price of gold. But, while I’m still digging through all rule books and digesting them, I will write a separate post on the exact details of the SGEI and all that has changed in the (Chinese) gold market.

In its first trading session 121.72 Kg of gold changed hands on the SGEI – volume is calculated bilaterally in Shanghai. 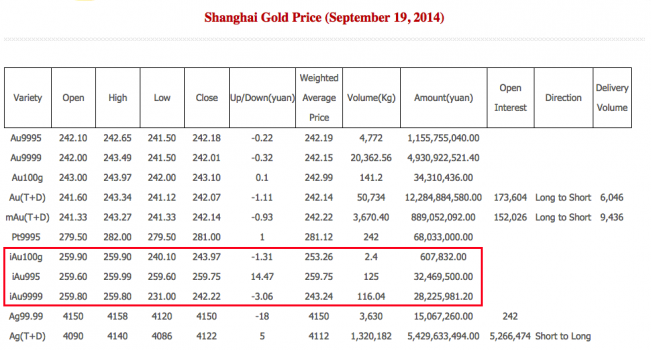 One of the speakers at the opening ceremony of the SGEI was the governor of the central bank of China, Zhou Xiaochuan. Zhou stated:

This event is a major milestone in China’s opening of its financial market to foreign investors.

…Our Premier Li Keqiang came to the Free Trade Zone this afternoon as a show of encouragement for the unveiling and launch of the International Board. He also invited Mayor Yang Xiong and I to attend the launch ceremony this evening to offer his congratulations, as well as to express his hope that the International Board be shaped into a marketplace with global influence

…Gold market is an important and integral part of China’s financial market. We are now the largest gold producer, as well as the biggest gold importer and consumer in the world. In recent years, the People’s Bank of China has taken to heart the national policies and guidelines on greater reform and opening-up of our entire financial sector, and made steady improvement to laws and regulations of the gold market, promoted its well-regulated growth and development, and was the main driver in transforming China’s gold market from a market for commodities into a market for financial products; from a market for purely spot trading to a market offering both spot and derivatives trading; and from a domestic market into an international one.

… the International Board will bolster China’s gold market toward greater trading volume and centralization, further highlight the price discovery function of the gold market…

…People’s Bank of China will continue to support the sustainable growth and sound development of the China’s gold market.

Can you imagine Mario Draghi or Janet Yellen attending the opening ceremony of a gold exchange in Frankfurt or New York, let alone speaking about the importance of gold? Fact is, the SGE and the SGEI are both created by the PBOC. 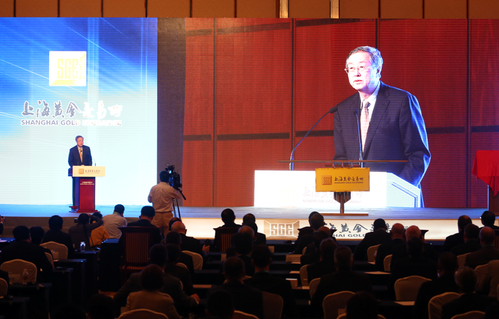 PBOC governor Zhou Xiaochuan speaking at the opening ceremony of the SGEI.

As a RMB-denominated exchange, with broader participants, larger trading volume, and with the sound integration of onshore and offshore investors and funds, the trading pricing of this Exchange will be promoted gradually to its internationalization, and eventually build a RMB-denominated gold price benchmark with big international influence. We call this pricing mechanism and its corresponding products and physical delivery standard “Shanghai gold". The introduction of the “Shanghai gold" in the gold market will help to improve the price discovery function of the RMB, strengthen the effective linkage between Chinese and international markets, and effectively exert the due role of China in the international market as a number one physical gold consumer, producer, importer.

…Today, the official launch of the International Board has put us on a new historical starting point. Carrying the golden dream of the Chinese people, we will uphold the concepts of innovative development, opening-up and win-win, in our enduring efforts of producing innovative products, improving service and making the Exchange a platform with greater international influence, and ultimately, making due contributions to the construction of Shanghai International Financial Center, to the development of China’s gold market, and to the prosperity in the world gold market. 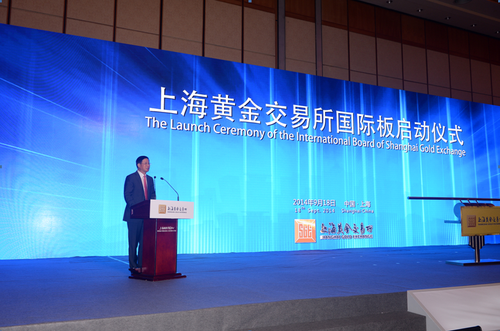 SGE Chairman Xu Luode speaking at the opening ceremony of the SGEI. 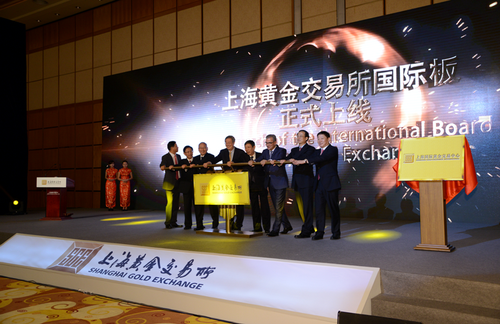 The launch of the Shanghai International Gold Exchange.

Additionally, saturday night the SGE launched a new website. On the English version international visitors are offered to open an SGEI account.

Let us go through the latest data from the SGE. In week 37 (September 8 -12) the amount of physical gold withdrawn from the SGE vaults in the mainland accounted for 41 tonnes, up 4.88 % from a weak earlier.

As I expected last week the Chinese were happy to buy gold on the dips in week 37 as the price has been tumbling down since July 10. The West has forgotten about gold all together, the Chinese are buying. Year to date there has been 1331 tonnes withdrawn from the SGE vaults (- 16.2 % y/y), annualized 1870 tonnes. My research has indicated SGE withdrawals equal Chinese wholesale demand. I would like to add I use another metric than for example the World Gold Council, as SGE withdrawals contain large quantities of recycled gold. My estimates for 2014 YTD are (based on SGE withdrawals):

recycled through the SGE = 162 tonnes

In my opinion all gold that is withdrawn from the SGE vaults isn’t purchased by the PBOC. 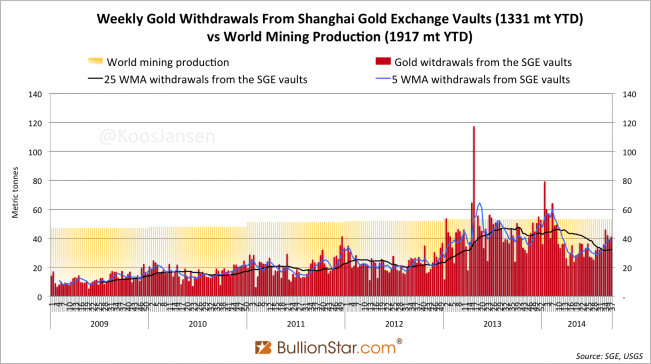 Fast forward one week to September 19; the SGE 1 Kg Au9999 physical contract closed at 0.52 % above London spot; premiums are in an uptrend since July. This underlines strong demand for gold in China, in contrast to what western media report based on gold export from Hong Kong to the mainland, data that has lost its significance as China imports more gold directly, bypassing Hong Kong, since April. 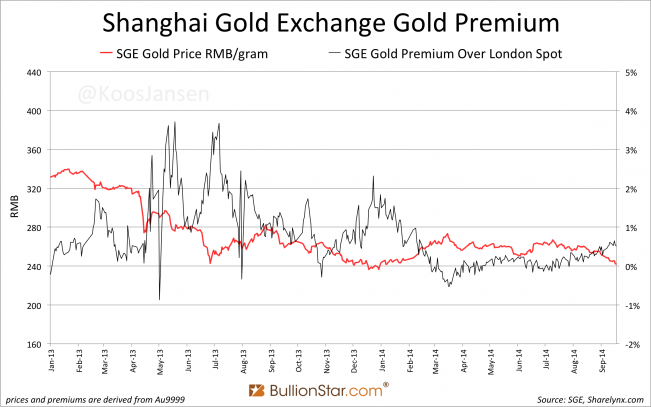 The silver DISCOUNT in China has diminished to 3.24 % compared to London spot. 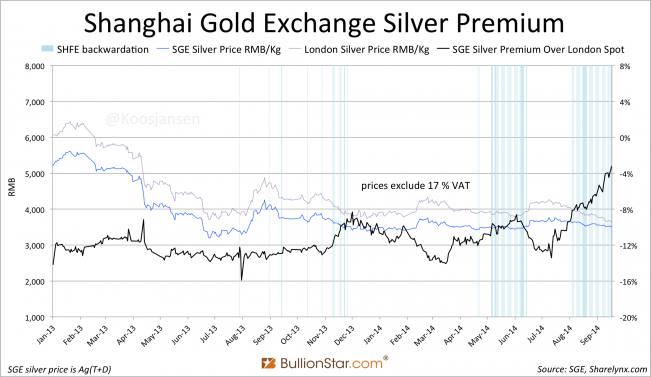 Silver at the Shanghai Futures Exchange is trading in backwardation since August 6.

A couple of weeks ago I started publishing the price of silver in China being actually lower than in London, because prices on all Chinese commodity exchanges include VAT (if a commodity enjoys VAT), which has to be subtracted from the quoted price to calculate discounts or premiums. Since then I got many emails from investors that are confused by this. Why does Bloomberg data suggests Chinese silver is trading at a premium? This is simply because Bloomberg uses the price quoted on the exchanges which includes 17 % VAT. 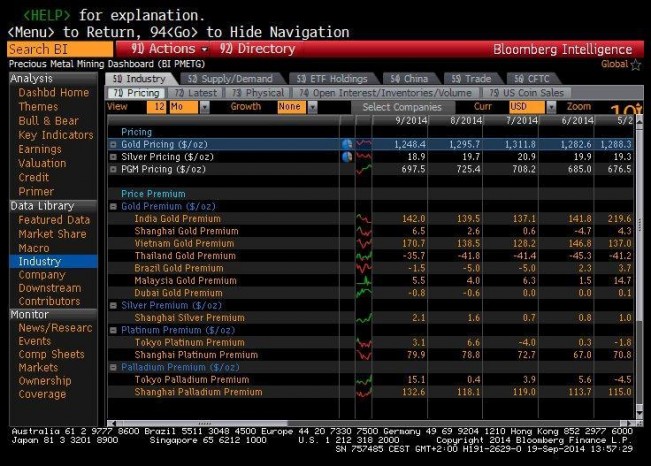 In a sense Bloomberg is right because if you would import silver bullion from China you are required to pay 17 % VAT, no restitution. However, in the mainland companies, of course, do get VAT restitution. Effectively the State Council designed the Chinese silver market to make its people benefit from lower prices, silver can be mined for $ 9 Oz in China, and protect silver from being exported. Additionally Chinese citizens are being stimulated to buy silver (and gold) as part of their savings. The next pictures show how China’s largest bank, ICBC, offers clients to save in precious metals. 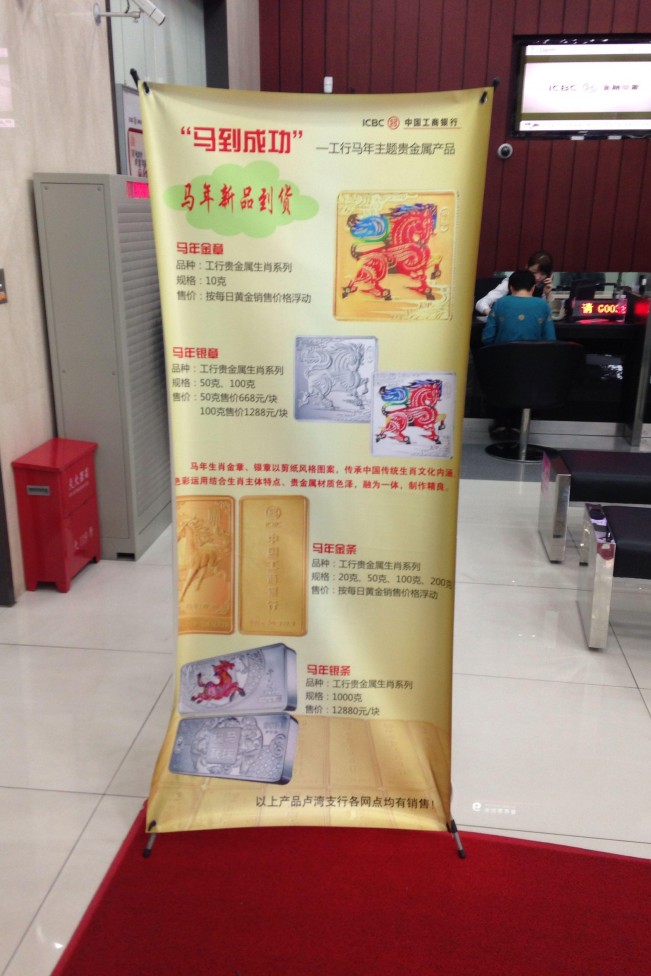 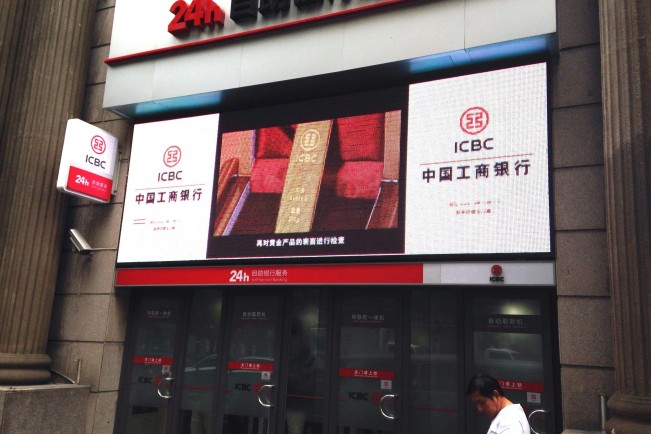