First let’s go through the Chinese SGE report published on August 8, which covers week 31 (July 28 – August 1). The total volume of gold traded on the Shanghai Gold Exchange (SGE) was 258 tonnes, of which 147 tonnes were traded as the spot deferred contracts Au(T+D) and mAu(T+D), the open interest closed at 141 tonnes. Total deliveries of the spot deferred contracts accounted for 55 tonnes in this week, gold withdrawn from the SGE vaults, which equals Chinese wholesale gold demand, accounted for 32 tonnes.

Year to date Chinese wholesale gold demand is 1,094 tonnes. By taking SGE withdrawals as a reference China has net imported 688 tonnes year to date. To demonstrate this way of estimating gold import is quite accurate please watch the video below. It’s a segment of an interview with me by Lars Schall, published on March 20, 2014. I estimated Chinese non-government net gold import for 2013 was 1,500 tonnes.

When the interview was conducted the mainstream media predominantly used Hong Kong net export to the mainland, which in 2013 was 1,158 tonnes, as Chinese net import. I estimated total net import by using SGE withdrawals as a reference. It was on May 15, 2014, when SGE chairman Xu Luode spoke at the Fourth Commercial Bank Gold Investment Forum and disclosed the exact number of net gold import in 2103, it was 1,540 tonnes.

The total volume of silver traded on the SGE in week 31 was 4,812 tonnes, of which 4,543 tonnes was traded as spot deferred contract Ag(T+D). Zero Kg’s were delivered of Ag(T+D) throughout the week, the open interest ended at 4,941 tonnes. How much silver was withdrawn from the vaults is not published by the SGE. Silver inventory at the SGE stands at 94 tonnes. The SGE gold premium has been hovering around zero since April. The SGE silver premium, measured by Ag(T+D), is back on the rise. Closing nearly at 6 % on August 1. I manually calculated the premium for Ag(T+D) on the close at August 8; it was 7.4%. As we can see from the chart below that is a year to date record. All silver quotes on Chinese exchanges include 17 % VAT.

Now let’s have look at the most recent data from the Shanghai Futures Exchange (SHFE) – these numbers do not lag one week, they’re updated until August 8. The total volume of gold futures traded in week 32 was 873 tonnes, the open interest closed at 198 tonnes. The total volume of silver futures traded was 75,266 tonnes and the open interest closed at 8,387 tonnes. There were no deliveries at the SHFE as this can only be done in the 5 business days after the Last Trading Day; which is always the 15th day of the delivery month (If it is a public holiday, the Last Trading Day is the first business day after the holiday).

In contrast to the COMEX, on both the SGE and SHFE reported volume, turnover and open interest is calculated bilaterally. This means 1 long and 1 short creates an open interest on the SHFE of 2, on the COMEX this would be 1.

On the SHFE silver is currently not in backwardation, but the contango is such low that it doesn’t pay to cash and carry the metal (in short; the cost of funding spot metal plus the storage costs transcend the future price), hence SHFE silver inventory isn’t being supplemented and reached a record low on August 8 of 143 tonnes. 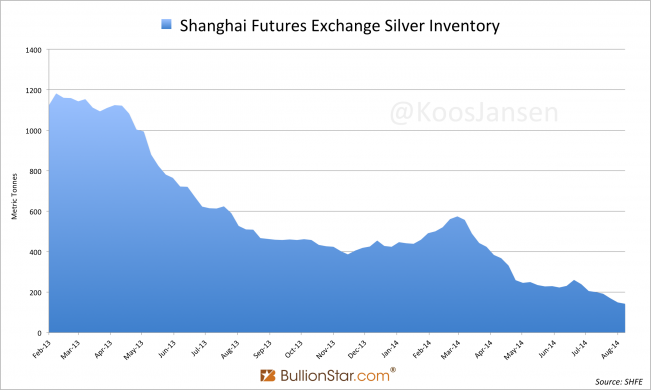 The SHFE silver front month contract traded at a premium of 8 % over London spot at the close in Shanghai on August 8.

For my future weekend wrap ups I will compare historic Chinese precious metal trading activity to COMEX data to track if the paper markets are shifting east.