So, what are we looking at? Well, on one hand the updates in the official gold reserves are intended to conform to the rules of International Monetary Fund (IMF) for renminbi inclusion into the IMF’s basket of currencies; the Special Drawing Rights (SDR). To be included, the renminbi is required to be freely usable and the PBOC is required to report international reserves according to the IMF’s Special Data Dissemination Standard (SDDS). The IMF disclosed early this year that the renminbi qualified to be freely usable, what was left was openness about the PBOC’s international reserves, which is what the Chinese are working on right now. On the other hand the official gold reserve updates acknowledge that the PBOC has been buying gold all along to diversify its reserve holdings which have mostly been consisting of US dollar denominated debt.

It may look like the next world reserve currency will be the SDR, but the SDR is nothing more than a bouquet of paper money embedded with all the flaws of fiat currency. Perhaps the SDR will not function as the new world reserve currency and China is merely using it to kick start renminbi internationalization.

I’ve written repeatedly on these pages that the Chinese government is stimulating its people to purchase gold for a healthy part of their savings. This government would not encourage its people to buy assets it thinks will be worthless in ten years. Thus, the State Council is positive the (renminbi) price of gold will rise!

In 2002 the Shanghai Gold Exchange (SGE) was erected at the core of the Chinese gold market as a robust physical and derivatives exchange that provides all Chinese citizens with direct access to the gold wholesale market. Then, on 11 August 2015 the PBOC devalued the renminbi (yuan) by 3 %.

In the graph above we can see the renminbi depreciation against the US dollar. As the US dollar is the world reserve currency, it is also the internationally recognized unit of account. The devaluation of course also affects the renminbi’s value against all other currencies, gold included. The notable difference between gold and all other currencies is that the Chinese government stimulated its 1.3 billion citizens to save in gold, not in any other currency.

This message from the Chinese State Council is very clear. The Council tells its people to save in gold to survive the global fiat devaluation rodeo. When China devalues the renminbi it will boost export and dress up GDP, while the people’s purchasing power will be unharmed assuming that the people saved in gold. This is what happened to the renminbi gold price on 11 August:

There’s of course also other factors influencing the renminbi price of gold but the above example serves as an illustration of the importance for the Chinese people to hold gold. The core message is significant though: save in gold to protect your purchasing power because the renminbi will be inflated to whatever degree necessary. When you live in renminbi land your government will somewhat to some degree – let’s not pretend these gentlemen are angels – help you not be fooled by the paper game and protect your purchasing power.

The fact that the PBOC keeps adding gold to its reserves and values these reserves mark-to-market, puts them in the same position as the Chinese people. The PBOC owns foreign currency reserves (US dollars, euros, yen, pounds, etc), SDR’s and gold. When all fiat currencies further devalue, the asset of last resort is gold. As PBOC is marking gold to market, a potential hyperinflation in fiat assets coupled with a revaluation in gold will keep their balance sheet intact.

Chinese authorities have never hidden their preference to shift the international monetary system away from the US dollar. Experience has taught them not to subject the value of reserves to whims of a foreign economy – the current dollar system is unsustainable. China’s problem is, how to get rid of dollars if you own more than a trillion of them? Ironically, the biggest beneficiary of the current strength in the US dollar is China. A strong dollar and weak gold price are perfect to slowly diversify into gold.

The PBOC needs to value gold mark-to-market (MTM) on its balance sheet for when the price of gold makes a reverse and the dollar tumbles; losses in dollars will be compensated by gains in gold. One could say MTM is a logic step prior to a post-dollar monetary system. In addition, valuing gold reserves MTM acknowledges the weakness of all fiat currencies, another hint from the PBOC to the populace – as opposed to Federal Reserve that has its gold booked at a statutory value of $42.22 an ounce. 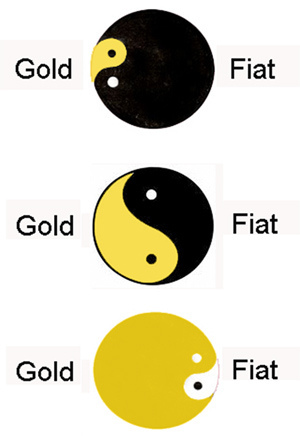 The Eurozone (created to counter the dollar) and Russia value their gold reserves MTM as well. Maybe a few powerblocks are preparing to pull the plug from the dollar and discontinue its exorbitant privilege? If eventually gold were to replace the US dollar’s status as reserve currency, central banks would be buying and selling gold to manage their respective currencies. Is this policy in the European Central Bank’s mandate? Yes it is.

18.1. In order to achieve the objectives of the ESCB and to carry out its tasks, the ECB and the national central banks may:

— operate in the financial markets by buying and selling outright (spot and forward) or under repurchase agreement and by lending or borrowing claims and marketable instruments, whether in euro or other currencies, as well as precious metals;

The ECB and national central banks may:

— hold and manage the assets referred to in this Article;

— conduct all types of banking transactions in relations with third countries and international organisations, including borrowing and lending operations.

What a wonderful way for a central bank to fight deflation or inflation, just buy or sell gold. No exorbitant privilege, debt monetization, moral hazard or political disputes. Is this where we’re heading?