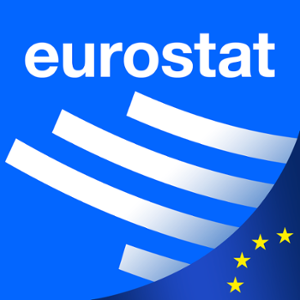 It was in August 2013 when I started digging into UK gold trade data. While at the time China was importing unprecedented amounts of gold, through customs data I was able to track the source all the way back to the UK, home of the London Bullion Market. In 2013 the only available database for UK gold trade was Eurostat. When downloading the numbers from 2013 and all the years before something quite remarkable appeared to me. According to Eurostat the UK imported 614 tonnes of gold in August 2008 and 1,352 tonnes in September 2008, just from one country; Germany. It was hard to comprehend these numbers, how could Germany export nearly 2,000 tonnes of gold in two months? This had to be a mistake, I thought. Eventually I wrote a post about it leaving it to the reader to decide whether to believe these numbers.

What made these numbers so intriguing was the timing, Lehman Brothers collapsed on September 15, 2008. To find elevated physical gold trade right after the fiat house of cards was on the brink of collapse that month wouldn’t have surprised me at all, but, as Eurostat claimed, the gold started moving in August. Did the authorities knew what was about to happen and was gold sent to London in advance?

The next chart I compiled in October 2013. 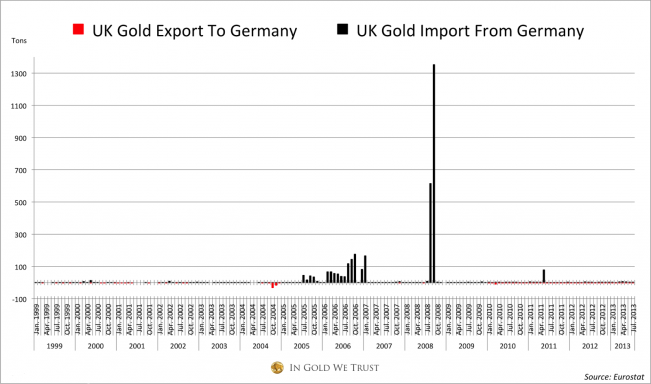 Soon after I wrote the post I contacted Eurostat to ask for clarification. Inquiries are made through an aloof system on their website, though I got my message across and they replied they would look into it and get back to me. Which they didn’t. After a couple more attempts to reach out I gave up.

March 2014, UK customs (HMRC) announced that in addition to Eurostat they would publish gold trade data as well. Soon it became obvious that HMRC was using the same dataset as Eursostat, kind of. The same numbers from August and September 2008 could be found through their tables, though I found data from other months was different. What then followed was confusion. While by my findings Eurostat’s reported gold value and tonnage matched (most of the time), HMRC’s data showed different gold purities?; a statistical nightmare.

For correspondence HMRC was more accessible. I could email with a real person that had a name, which was a relief compared to Eurostat. I started by asking a few basic questions, however, as the conversation progressed I sensed my contact was aware the numbers didn’t add up. Presumably I wasn’t the only one ringing the bell.

Meanwhile: one day I was looking at UK gold trade from February 2011 that showed 505 tonnes of gross export (reported by HMRC):

In these screen shots you can see I was filtering commodities by HS code 71081310 and 71081380, because in 2013 most UK exports to Switzerland (London Good Delivery bars from GLD and other LBMA vaults) were declared under 71081310. The official description of 71081310 is: “Bars, rods, wire and sections, plates, sheets and strips of a thickness, excl. any backing, of > 0,15 mm, of gold, incl. gold plated with platinum". The next screen shot is UK gold trade with Switzerland in May 2013 reported by HMRC:

Through all this confusion I was concerned if anyone ever could get the correct numbers on historic UK gold trade. A week ago I decided to write HMRC an email in which I layed out all inconsistencies I had found. They replied:

Please see the following link which explains the change in tonnage which was made earlier this year.

A large proportion of trade under CN8 71081310 on the Comext Database had a country level suppression applied to it for the period 2005 to 2011. This suppressed trade would not have appeared under a country breakdown but would be part of the EU or Non-EU total. This suppression has been removed on data published on UKtradeinfo.com; and Eurostat are in the process of applying these changes to Comext. HMRC has also just undertaken a historic revisions process to amend historical inaccuracies of significance to published trade data. Some of these amendments related to an over statement of the net mass of Gold (the Comext database is again currently being updated to reflect this). See link

The UK has worked with Eurostat colleagues over the last few years back to try and ensure that UK gold data is of a high quality. This was undertaken at considerable effort and resource. The UK has one of the major gold bullion exchanges (London Bullion exchange) in the world, and has considerably more gold trade than other EU Member States, and it takes a considerable resource to check and assure this volume of trade. As you can appreciate, having more than a total of 100m trade declarations in the UK per year to quality assure and check is a mammoth undertaking, especially with over 9,500 different commodities. However, through advanced IT systems and risk profiling, we are able to maximise the resources available to deliver a high quality trade in goods product. On occasion however, and this is true for all Member States, it is inevitable there may be inaccuracies in the data when held to detailed scrutiny.

That explains all. If you click the top link you’ll see that primarily gold tonnage, but also the value of other commodities had been previously disclosed incorrect by HMRC and Eurostat. Last time I checked at Eurostat I noticed they haven’t completely adjusted their numbers. In the next screenshot we can see Eurostat deleted all UK gold trade from August and September 2008 – for the time being.

If Eurostat has altered all the incorrect numbers as well and the dust has settled, I will resume analyzing historic UK gold trade data. Perhaps then we can make a fair estimate about how much gold there is left in the London vaults.