A Chink of Light into London’s Gold Vaults?

This new LBMA ‘monthly vault data’ will, according to the FT’s sources, be published on a three-month lagged basis, and will:

“show gold bars held by the BoE, the gold clearing banks, and those [vaults] operated by the security companies such as Brink’s, which are also members of the LBMA.”

The shadowy source quoted in the FT article is attributed to “a person involved in setting up the programme”, but at the same time, although “the move [to publish the data] is being led by the LBMA“, the same LBMA ”declined to comment” for the FT story. This then has all the hallmarks of a typical authorised leak to the media so as to prepare the wider market for the data release.

On 16 February, the World Gold Council in its “Gold Investor, February 2017" publication featured a focus box on the same gold vault topic in its “In the News" section on page 4, where it states:

“Enhanced transparency from the Bank of England

The Bank of England is, for the first time, publishing monthly data revealing the amount of gold it holds on behalf of other central banks.

As a leading custodian of gold, with one of the largest vaults in the world, the Bank of England’s decision is highly significant. Not only will it enhance the transparency of the Bank’s own gold operations; it will also support the drive towards greater transparency across the gold market.

The data reveals the total weight of gold held within the Bank of England’s vaults and includes five years of historical data."

Based on these two announcements, it therefore looks like the gold vault data release will be a combined effort between the LBMA and the Bank of England, the blood brothers of the London Gold Market, with the Bank of England data being a subset of the overall LBMA data. While neither of the above pieces mention a release date for the first set of data, I understand that it will be this quarter, i.e. sometime before the end of March. On a 3 month lagged basis, the first lot of data would therefore probably cover month-end December 2016, because that would be a logical place to start the current dataset, rather than, for example, November 2016.

While the Bank of England data looks set to cover a 5 year historical period, there is no indication (from the FT article) that the wider LBMA vault data will do likewise. From the sparse information in the FT article, the LBMA data will “show gold bars held“. Does it mean number of gold bars, or combined weight of gold bars? What exactly it means, we will have to wait and see.

Anything less is just not cricket and does not constitute transparency.

And its important to remember that any publication of gold vault data by the LBMA and Bank of England is not being done because the LBMA suddenly felt guilty, or suddenly had an epiphany on the road to Damascus, but, as the FT correctly points out:

“the LBMA, whose members include HSBC and JPMorgan, hopes to head off the challenge and persuade regulators that banks trading bullion should not have to face more onerous funding requirements." As a reminder, there is currently no official direct data published on the quantity of real physical gold bars held within the London gold vaulting system. This vaulting system comprises the vaults of eight vault operators (see below for list).

Once a year in its annual report, the Bank of England provides a Sterling (GBP) value of gold held by its gold custody customers, while the LBMA website states a relatively static total figure of “approximately 6,500 tonnes of gold held in London vaults" that it claims are in the vaults in its network. But beyond these figures, there is currently no official visibility into the quantity of London Good Delivery gold bars held in the London vaults. There are, various ways of estimating London gold vault data using the Bank of England annual figure and the LBMA figure together with Exchange Traded Fund gold holdings and central bank divulged gold holdings at the Bank of England. 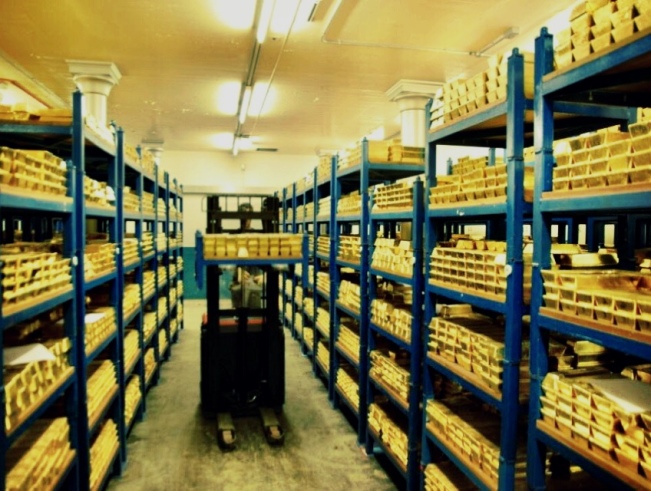 The Vaults of London

HSBC, JP Morgan and ICBC Standard are 3 of the London Gold Market’s clearing banks that form the private company London Precious Metals Clearing Limited (LPMCL). The other two member of LPMCL are Scotia Mocatta and UBS. Brink’s, Malca-Amit, G4S and Loomis are the aforementioned security companies. The LBMA website lists these operators, alongside their headquarters addresses.

Bizarrely, the FT article still parrots the LBMA’s spoon-fed line that the vaults are “in secret locations within the M25 orbital motorway”. But this is far from the truth. Many of the London vault locations are in the public domain as has been covered, for example, on this website, and the FT knows this:

And obviously, the Bank of England vaults are where they always have been, under the Bank’s headquarters in the City of London: https://www.bullionstar.com/gold-university/bank-england-gold-vaults

It’s slightly disappointing that we spend time and effort informing the London financial media where some of the London gold vaults are, and then they continue to parrot the LBMA’s misleading “secret locations” line. I put this fake news down to a decision by the FT editors, who presumably have a stake in playing along with this charade so as not to rock the boat with the powerful investment banks that they are beholden to.

The FT also reminds us in its article that “last year a gold vault owned by Barclays, which can house $80bn of bullion, was bought by China’s ICBC Standard Bank.“

This Barclays vault in London was built by and is operated by Brink’s, and presumably after being taken over by ICBC Standard, it is still operated by Brink’s. Logistically then, this ICBC Standard vault is most likely within the Brink’s complex, a location which is also in the public domain, and which even hosts an assay office as was previously mentioned here over a year ago. The Barclays vault (operated by Brink’s) is even mentioned in a Brink’s letter to the SEC in February 2014, which can also be seen here -> Brinks letter to SEC February 2014.

Given the fact that there are eight sets of vaults in the London vault system (as overseen by various groups affiliated to the LBMA such as the LBMA Physical Committee, the LBMA Vault Managers Working Party,  the gold clearers (London Precious Metals Clearing Limited), and even the LBMA Good Delivery List referees and staff, then one would expect that whatever monthly vault data that the LBMA or its affiliates publishes in the near future, will break out the gold bar holdings and have a distinct line item in the list for each vault operator such as: 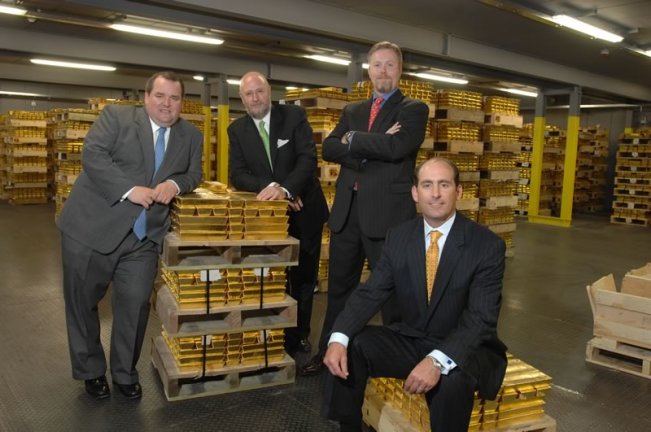 At the LBMA conference in Singapore last October, there was talk that there were moves afoot for the Bank of England to begin publishing data on the custody gold it holds on a more regular basis. It was also mentioned that this data could be extended to include the commercial bank and security carrier vaults but that some of the interested parties were not in favour of the idea (perhaps the representative contingents of the powerful HSBC and JP Morgan). Whatever has happened in the meantime, it looks like some data will now be released in the near future covering all of the participating vaults. What this data will cover only time will tell, but more data than less is always welcome, and these data releases might also help show how near or how far we were with earlier estimates in trying to ascertain how much gold is in the London vaulting system that is not accounted for by ETF holding or central bank holdings.

Revealing the extent of the gold lending market in London is critical though, but this is sure to remain a well-kept secret, since the LBMA bullion banks and the Bank of England will surely not want the general market to have any clue as to which central banks don’t really have any gold while still claiming to have gold (the old gold and gold receivables trick), in other words, that there is serious double counting going on, and that some of the central bank gold has long gone out the door.