The Gold Vaults of London: Malca-Amit

Following on from the recent blog post “G4S London Gold Vault 2.0 – ICBC Standard Bank in, Deutsche Bank out“, which discusses the G4S precious metals vault located on Abbey Road in the Park Royal area of London, its instructive to also look at where the other London Gold Market vaults are located.

According to the vaulting pages on the London Bullion Market Association (LBMA) website:

“There are seven custodians offering vaulting services in the London bullion market, three of whom are also clearing members of the LBMA (Barclays, HSBC and JP Morgan). There are also four other security carriers, who are also LBMA members (Brinks, G4S Cash Solutions (UK), Malca Amit and Loomis International (UK) Ltd). The Bank of England also offers a custodian service (gold only)."

These 8 custodians are then listed in a pdf document on the LBMA website with their head office addresses, but not the vault addresses. So where are the actual vaults?

Having looked at G4S, let’s continue by examining the London vault of Malca-Amit. On its website page which featuring its London vault, Malca-Amit states that:

“The London-based Malca-Amit vault is conveniently located close to Heathrow airport. The vault is graded at level XII CD EX, the highest European Vault classification and is complemented by the most up to date security systems including the Avigilon CCTV suite with cameras capturing 29 megapixels per frame.

The vault is authorised by the members of the London Clearing Company and has LBMA approval for the weighing and inspecting of precious metals.“

Driving around in Circles?

“It was a balmy day when we arrived at Feltham station where we were warmly greeted by our host for the day, Allan Finn, Global Commodities Director for Malca-Amit. Allan told us that the location of the vault was top secret so he deviously drove his car round in circles until we were so disorientated we had no idea where he had taken us."

“Our tour came to an end. Allan drove his car round in circles again until we were so disorientated that we didn’t know where we had come from. But he made up for it by taking us for a nice lunch on the river at Richmond.

Apart from driving around in circles between Feltham Station and the vault destination, the article also tells us that:

“Malca-Amit became a member of the LBMA in March 2012 and shortly afterwards completed the building of a new vault facility close to Heathrow airport…..

…the new secure storage facility was opened in April 2012 near Heathrow airport.“

So it seems that Malca-Amit was granted Ordinary membership status of the LBMA just prior to its new vault becoming operational. The granting of Ordinary membership was probably a precursor to the Malca-Amit vault being, in the words of Malca-Amit, “authorised by the members of the London Clearing Company ..[with].. LBMA approval for the weighing and inspecting of precious metals."

The LBMA Alchemist profile goes on to say:

“Built above ground, the Malca-Amit vault is one of a number of new facilities that either have been built or which will be opened shortly within the perimeter of the M25….. Proximity to an airport is an advantage.“

On 20 September 2012, the LBMA issued an advisory document titled “Best Practice Guidelines; Used by “Loco London” Vaults Opening a new vault for the storage of precious metals“, in which it was advised that “If you wish to store the higher value precious metals then you may find that insurers insist that your vaults are subterranean“. This obviously wasn’t an issue for Malca-Amit’s insurers, since the Malca-Amit vault is in a building that’s above ground.

“When we eventually arrived at our destination only the sound of planes overhead gave any indication as to where we were."

“But the thing that strikes you most is the vault. Allan explained that it is a Chubbsafe
grade XII which offers the highest possible level of security and provides capacity for more than 300 metric tonnes of gold and 1,000 tonnes of silver.“

“Gold and silver are not the only precious items in storage: there are also diamonds and other precious stones and jewellery which are kept in storage on behalf of clients."

Where then could Malca-Amit’s recently opened gold and silver vault be located? 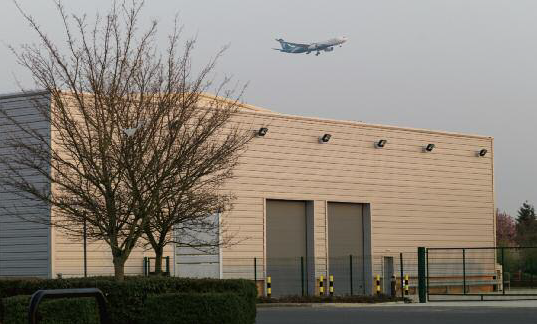 This planning document is posted on the www.gov.uk website, and on page 10, it states:

Which leads us to the questions: what is and where is this Arena Building? 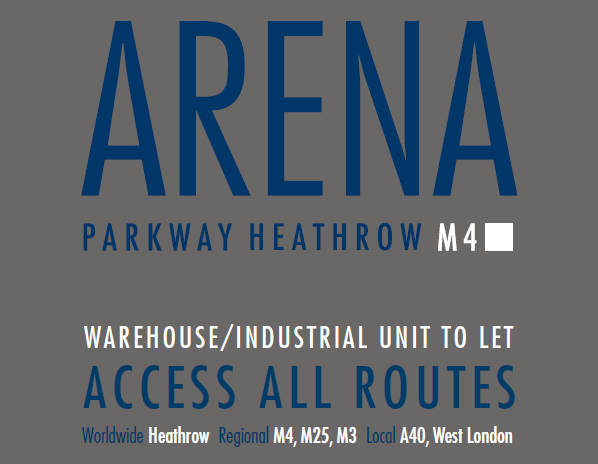 In 2011, the already completed Arena Parkway building,  profiled in a glossy brochure, was marketed on a UK commercial real estate website called NovaLoca commercial property finder. This brochure pdf file was created on 14 July 2011. So although Malca-Amit may have “completed the building of a new vault facility" as the LBMA stated, it did not build the building in which the vault is located. The building had already been built prior to 2011.

The ‘Arena’ building is in the ‘Parkway Heathrow M4’ industrial estate off Cranford Lane, in Heston, in the Hounslow area to the north-east of Heathrow airport.  Anyone who knows that area around Hounslow will know that the one of the landing routes into Heathrow Airport is a very low approach along a route right above where this building is located.

According to the brochure:

“The Arena provides a modern detached warehouse unit of 23,660 sq ft with a self-contained secure yard and benefits from 24-hour security, an on-site management team and surveillance cameras."

“The unit is available on a new Full Repairing and Insuring lease basis."

Additional information in the 2011 brochure includes such facts as:

Description
The Arena is a new high quality warehouse suitable for production, storage, research and development, laboratories and general distribution. It has an impressive reception leading to first floor fully fitted offices. The property is constructed of brick and profile metal composite cladding with double glazed windows fitted with solar shading.

Given that this Arena building was being marketed from July 2011 onwards, and that Malca-Amit began operating the vault facility from April 2012, then it would suggest, as would be expected, that Malca-Amit took possession, and then fitted out the building to its own specific requirements, including the vault, before opening for business in April 2012.

The Arena building is in the London Borough of Hounslow, so it is instructive to examine planning applications made for this building in and around the dates that Malca-Amit took occupancy.

A planning search for TW5 9QA on the Hounslow planning website reveals that plans for this Arena Parkway building were submitted from as early as December 2007, but there seems to have been a long drawn out series of planning applications and amendements made for the construction, the latest being submitted in December 2008 and approved by Hounslow Council in February 2009. Therefore, construction of the building would have commenced sometime after February 2009.

The planning applications for the Arena building, which were submitted by CGNU Life Assurance Ltd / Aviva Investors, summarise the project as follows:

The Arena drawings document submitted with the most recent building application shows a layout in keeping with the size and shape of the structure that was actually built, so it looks like the development was completed in accordance with the last approved set of plans.

Following occupancy by Malca-Amit, the only planning application submitted for the Arena Building since then is application “Planning Reference: 00315/F/P61" which addressed improved fencing around the site.

Details: Erection of security fencing and bollards along perimeter of site with sliding gate at yard entrance and rising barrier at car park

Ward: Heston West   [note that a ward is a sub-unit of a borough]

The ‘delegated report’ submission states that:

In order to secure parking on site a car park gate has been proposed which runs off the access road. This would be 3m wide rising barrier which would be 1m high, RAL 9003 (white) finish with contrasting red banding. There would be 1m wide exit gate which would be next to the unit."

The Site Plan and Elevation for the above application put some visuals on the above delegated report text. This fencing is therefore the fencing that Allan Finn of Malca-Amit was referring to when he told the LBMA that the"perimeter fencing can withstand a 7.5-ton vehicle at 50 mph and the internal shutter anti-ram barrier which is located behind the entrance gates can withstand a 7.5-ton vehicle at 30 mph."

The Edinburgh Assay Office and UKAS

Not only is Malca-Amit located in this Arena Parkway Building, but so is the Edinburgh Assay Office.  Although the Edinburgh Assay office has its headquarters in Goldsmiths Hall, Edinburgh, in Scotland, it also operates a laboratory at a Heathrow Sub Office where it is accredited for “Chemical Tests for the purpose of hallmarking".

However, 4 days earlier on 4 June 2015, UKAS posted a report titled “The Edinburgh Assay Office Issue No: 009 Issue date: 04 June 2015" in which the Heathrow Sub Office was listed with an address of  “1st Floor,  Arena Parkway, Cranford Lane, Heston, TW5 9QA". 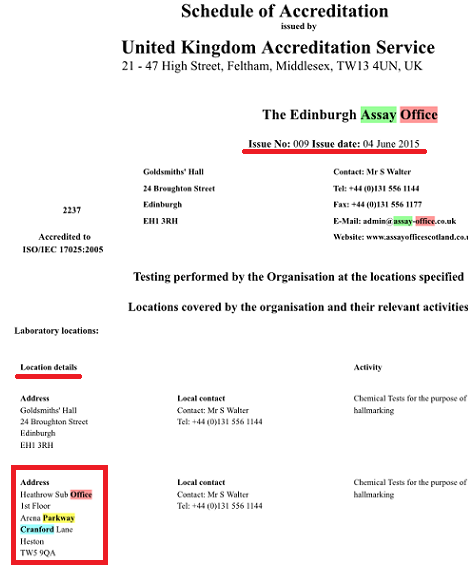 The commercial logic for the Edinburgh Assay Office having a presence in Malca-Amit’s Arena building seems to be that, in addition to Malca-Amit storing precious metals and precious stones and jewellery in the building, the location is also convenient for the rest of the Heathrow area where precious metals and jewellery are constantly arriving into and departing from. This is the ‘Hallmarking in Transit’ service offered by the Edinburgh Assay Office, offered in conjunction with Malca-Amit, and explained on the Assay Office website here, and also on Malca-Amit’s website here.

The Edinburgh Aassy Office’s Heathrow sub-office was profiled in January 2015 in an article on website Jewellery Focus, complete with photo of the office in the Arena building. Notice the Malca-Amit warehouse floor in the background of the photo with the office on the 1st floor. The one year anniversary of the Edinburgh Assay Office sub-office in the Malca-Amit premises was also recorded in an end of January 2016 article from Professional Jeweller titled “Edinburgh Assay Office celebrates one year of Hallmarking in Transit at Heathrow”.

This is not the only UK-based assay office to maintain a sub-office in the premises of a secure precious metals transport and secure storage operator near Heathrow Airport. The Goldsmiths Company – Assay Office, which is headquartered in the City of London, also operates a Heathrow Sub Office in “Unit 7, Radius Park, Faggs Road, Feltham, Middlesex, TW14 0NG". This is listed in a UKAS report “The Goldsmiths’ Company – Assay Office Issue 016 Issue Date 05 August 2014". This ‘Unit 7 Radius Park’ is a Brinks building and it too contains a vault, but that’s another vault profile for another day.