In my last post, US Dollar as Reserve Currency – Credibility Inflation, I briefly touched on a few ideas relating to FreeGold such as the demand for the US Dollar as a savings instrument temporarily propping up the fiat/debt/money system.

FreeGold is not a single theory but an understanding of how past events have formed a gold trail which will significantly change our monetary system in the future. It’s a set of all-encompassing explanations tying together trade and geopolitics with the monetary system. The foundation of the ideas constituting FreeGold was laid by two writers, Another and Friend of Another (FOA) and is built upon today by a third contributor, FOFOA.

In my previous post, Gold or Fiat? That is the question…, I described how lending expands the money supply, whether in gold or fiat. When savers save in the same medium as is used for the Medium of Exchange, a collapse always follows money expansion.

Under gold standards, fiat and gold are always tied together in some way. Reintroducing gold as the international settlement medium for net debts doesn’t however necessitate fiat to be tied to gold.

Under FreeGold, gold is reintroduced as Store of Value but without being tied to fiat. By using scrip money/fiat/debt for short term settling but using freely floating gold for long term settling, the horrendously skewed trade balances we see today will be a memory of the past. Gold is thus set free from its role as medium of exchange, thus the name “FreeGold".

Under a FreeGold system, politicians will still be able to overpromise and overspend  in the short term but the value of their monetized debt (money) after fiat has hyperinflated, as measured in gold, will be minuscule compared to today.

Debt is the Essence of Fiat

Fiat money is created as debt out of thin air. And there’s a lot of it created.

The US Dollar has already been hyperinflated monetarily but it isn’t visible yet in terms of consumer price inflation as the excess money created has been saved rather than spent on consumption. As long as the (non-US) world is buying roughly the same amount of US Dollar investments as the US trade deficit, there’s no price inflation.

Capital flows can and will turn on a dime though. Just imagine how much (little) the US Dollar would be worth if the US Dollar depreciated to balance the US trade deficit.

The cause of the low price inflation we see today, despite the high monetary inflation, is the hoarding of credit. Credit implies future production revenue. What’s the chance of future production living up to the debt it’s built upon?

Put another way, saving of credit increases the purchasing power of money that isn’t saved. The saved credit causes bubbles whereas price inflation is delayed.

The absence of price inflation is incorrectly interpreted by central banks as too little money supply when there is already too much. Their knee-jerk reaction is to lower interest rates further and inject even more money through QE, thus increasing the underlying problem even more. Banks are complementing this by lowering lending standards to expand their fractional reserve lending as much as possible.

The problem of too much credit competing for a limited pool of credible borrowers can’t be solved by lowering lending standards and flooding the market with even more credit.

The credit must find vehicles to be hoarded into. This is creating massive demand for passive investments without adding any sort of productivity or innovation to the economy – a more realistic determinant of the health of the economy. Instead – to the detriment of the economy – we get bubbles, malinvestment, misallocations, debt saturation and unprofitability. Entrepreneurs which would have been successful in a sound meritocratic economic system are punished. Creating new innovative products have become secondary to putting companies on the investment markets. Companies even operate at a loss just to service debt, often with government stimulus as a substitution for keeping people off the dole.

Governments around the world are fighting deflation labelled as evil. We are nowhere close to hyperinflation, right?

Hyperdeflationary pressure precedes hyperinflation. It’s the loss of confidence in a deflation that triggers the hyperinflationary phase. In terms of gold as a unit of account, what’s called a hyperinflation in a fiat money terms, is actually deflation, as gold typically strengthens its purchasing power when fiat currency hyperinflates.

The only reason the US Dollar is still holding up at this point, is its demand as a form of a savings instrument from the private sector. It used to be central banks providing structural support for the US Dollar but this structural support has ended. Surplus countries like China and Russia are no longer interested in accumulating any more US debt. They know it’s worthless. Instead, they try to diversify as much as they can without imploding the value of their existing US debt holdings. They know the monetary system is going to reset and they are planning accordingly by accumulating real tangible assets generally and gold specifically.

So yes, deflationists are right in their analysis of the current environment but miss what follows next.

With our current monetary system, US Dollar denominated (debt) assets are held as future claims on US Dollars i.e. held with a promise of the counterpart to deliver US Dollars. The problem is that cash or digital cash only makes up a very small percentage of the total money supply. When cash is claimed en masse, there is no cash to finance the redemption. As the cash doesn’t exist, the government will have to monetize the debt with newly printed cash to avoid a massive hyperdeflationary depression.

Depression and hyperinflation are built up in the same way. It starts with expanding the money supply followed by debt defaulting. When this is realized among the general population, there’s a loss of confidence leading to further deflationary pressure. At this point, governments start to monetize debt at all cost. Whereas bank issued fiat debt money is elastic and can contract, government issued fiat base money (cash) can not. The issuance of inelastic cash coupled with the demand for that cash is what causes the hyperinflation, which in the end leads to the physical money printing.

Hyperinflation is thus the process of saving debt at all costs replacing debt with cash.

We can already see the signs – the beginning of the end – of a guaranteed hyperinflation.

One sign, is the excess credit created that is steadily siphoned into the stock markets, which delays the price inflation of real goods and services but cause massive asset bubbles.

Another sign is that governments monetize credit with newly created base money/cash.

Remember that strong deflationary pressure always precedes hyperinflation, which is exactly where we are now.

It’s when the confidence in the economy is lost on a broader scale that hyperdeflation turns into hyperinflation with governments monetizing debt at all costs.

But what if they don’t?

No country outside the gold standard has ever allowed a depressionary deflation to run its cause. The primary objective for a government is to get re-elected. If they can kick the can forward, they will. Sure, the coming hyperinflation will be destructive, but a hyperinflation may be less visible to the general population than a deflationary depression with immediate economic failure.

When the hyperinflation is coming, you don’t want to be stuck with fiat denominated assets as all the empty promises will be exposed in daylight. Fake capital will be destroyed whereas gold will shine as the ultimate store of value.

The price of gold is irrelevant. The price of gold has got more to do with how worthless the fiat currencies become. The only way to accurately measure data like e.g. food, assets and commodities is to do it in terms of gold. Gold needs to replace fiat currency as the unit of account for us to get a stable ruler.

That’s exactly what you can do with BullionStar Charts. Measure e.g. S&P 500 in terms of gold. Are stocks always better in the long run? Not necessarily… 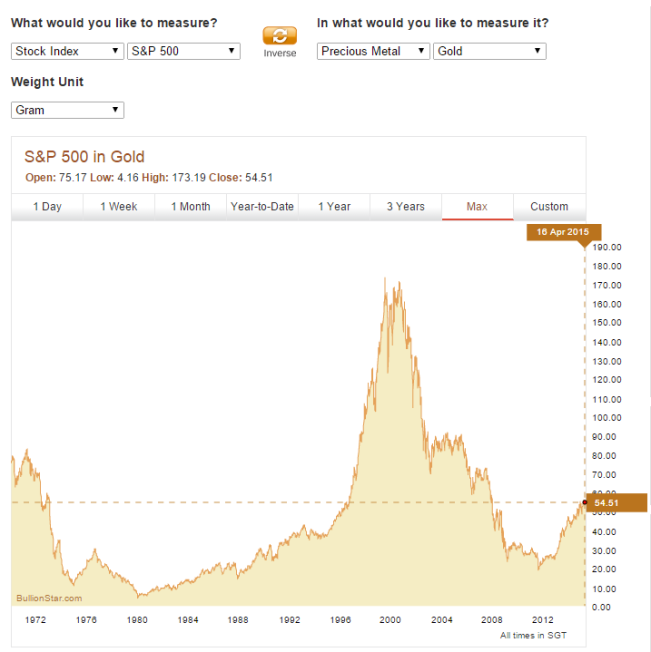 Unless the physical gold market will be rejuvenated by the initiatives we see in China and Singapore, the hyperinflation may at first not be reflected by a rising price of gold on the paper markets. As the price of gold is set on the London OTC spot market and on the futures markets, it may very well decrease at first due to a loss in confidence of paper gold.

There may instead be a shortage of physical gold on the real physical market. If/when this happens, there will be a mass scramble into physical gold with the physical markets significantly revaluing gold to entice any physical flow at all. Having built a sound marketplace for physical gold trading, China is likely to take over the pricing power of gold and with it emerge as the new dominant player in the world economy.

Encapsulating all of this, FreeGold can be said to be the adjustment mechanism correcting the imbalances between the artificial debt/credit/paper system and the real physical world represented by gold.

Do you want to sit on paper or gold when the monetary system resets. I know my choice (although the silver is substituting partly for the gold below:-)). 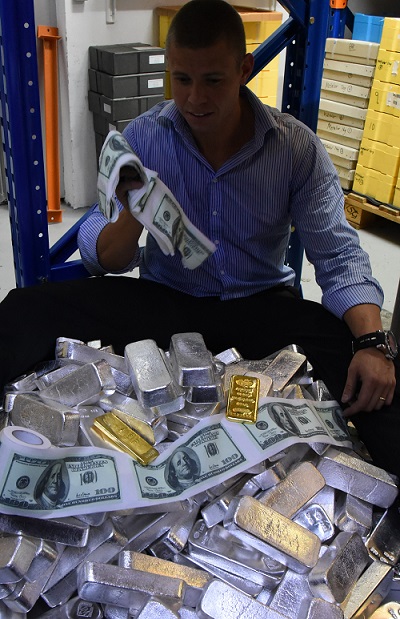 Credit (gold?) to you for not only organizing the thoughts of Another and Friend of Another but for expanding and lengthening their visionary path to the future.

I’ve read your blog for several years and was a slightly provoked when reading that “no bullion dealer understand FreeGold" a couple of years ago (although I don’t find the reference now). It took me a while to object as I’ve been busy building BullionStar following the gold trail in the following ways:

– BullionStar charts – Measure in gold (and anything else) as a unit of account.

– Acquiring FreeGold.com where we plan to assist in publishing information about the trail we’re on.

Walking on this gold trail, we have an ambitious development plan for the future reintroducing gold as store of value and unit of account.