Gold or Fiat? That is the question…

What happens when you deposit money at the bank?

Most people don’t think much about it. The bank probably safekeeps the money in their vault. Then I can come to the bank to withdraw my money any time. Right?

When you deposit money at the bank, you immediately relinquish your ownership to that money.

The bank will not only loan out “your" money, they will use it as as reserves to loan out even more than what you deposited in the first place. The justification for this is simply that you probably won’t claim “your" money back any time soon anyways. If you were to claim it back together with only a few percent of the other depositors, the bank would go bankrupt.

When you deposit money at the bank, you give up the ownership of it and instead get a claim on the same amount. The bank vice versa has a liability.

If you rent a safe deposit box, you have to pay rent. If you however engage the service of a bank depositing money, they are supposed to pay you interest.

Think about it like this. If a bank deposit was for safekeeping only, how can it pay interest?

The only reason a deposit pays interest is that the claim is inherently worthless. You are paid interest as compensation for the risk of giving up the ownership of your money in return for a claim.

By paying you interest, the bank is telling you that your money is inherently worthless. Fiat’s only value stems from it serving as medium of exchange and that’s not worth much.

1) If you deposit money at the bank, you lose ownership of the money and only hold a claim.

2) If you try to get smart and withdraw your money and you’re lucky enough for the bank to have any currency to hand to you, you get inherently worthless paper money.

As we all know interest rates are at unprecedented lows. Some central banks like the ones in Switzerland, Sweden and Denmark have even set a negative main rates.

What are the consequences for a depositor if the interest rate turns negative on savings accounts?

Remember that interest is paid for the risk of depositing money relinquishing the ownership of the money in return for a claim. With negative interest rates, there’s multiple incentives not to deposit money but to keep the cash. You don’t lose any money if you keep the cash and you don’t bear the risk of the bank going bankrupt.

A banknote under a gold standard is redeemable into money i.e. gold.

Under a gold standard, banknotes are issued as receipts for the gold safekept in the vault. Banks are thus keeping gold reserves as assets backing up its liabilities i.e. the issued banknotes.

Under a fractional reserve banking system, a bank is keeping (fiat) base currency i.e. physical or digital cash as reserves.

The similarity between a gold standard and a fiat system is that a bank can expand credit under both systems. 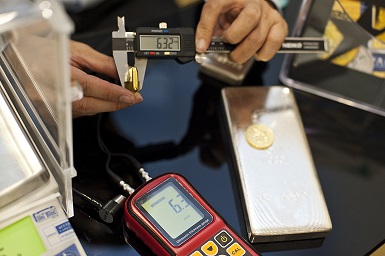 Credit Expansion under a Gold Standard

Supporters of the gold standard often point to the growth and relative stability under the gold standard between 1870 and 1913. The world developed rapidly during the period, interest rates where relatively stable and the volume of bank deposits was relatively fixed at 2 times the gold reserves. There were occasional recessions but they were relatively short-lived clearing out misallocations and reinvigorating the economy.

What camp is right?

The game changer came in 1913 when the U.S. central bank, the Federal Reserve, was set up. In the name of stabilizing, the central bank promised to backstop banks if they got into trouble.

As the risk of bankruptcy decreased with the central bank being the lender of last resort rescuing banks from liquidity problems, it became increasingly uncompetitive for banks to maintain high reserve rates. The banks  therefore went on a lending spree expanding credit to increase profitability which led to the asset bubbles in the 1920’s.

In a climate with excessive credit expansion, there is no additional demand for money to be borrowed. Instead there’s an increase in lending due to interest rates being lowered below the natural interest rate (the time preference rate for individuals between using the money for consumption now versus saving for later) and due to lending standards being lowered.

The introduction of central banks was what set off the credit expansion supporting fractional-reserve banking providing expandable bank reserves and eventually removing all monetary ties to gold.

The socialistic demand for governments to take care of people from cradle to grave may have played a part in catalyzing the development towards a fully fledged fiat monetary system. For governments to be re-elected, credit expansion serves the purpose of promising something out of nothing.

But are the long-term costs of bubbles leading to depressions causing misery and chaos worth the price? Although, there might be indirect support as described, there’s no active vivid support of fractional reserve banking outside politics, central banking or banking.

Think about it. How many economists are there employed in the interest of denationalized inelastic commodity money compared to the number of economists in the government sector?

About 50 percent of all economists are employed in the government sector with most of the rest in the banking/financial sector.

Perhaps we shouldn’t be surprised of the economists support for the fractional reserve banking system in the light of the above. In running my bullion dealers, LibertySilver.se in Sweden, LibertySilver.ee in Estonia and BullionStar in Singapore, I’m biased being one of the few economists not being invested in the fiat currency camp.

To be continued next week…