US Dollar as Reserve Currency

In my last post, I discussed and compared different bank reserve systems. With the introduction of the US central bank, the Federal Reserve, in 1913, banks started to take larger risks expanding credit as they knew the central bank was backstopping them. With the monetary ties to gold severed in 1933, the world was essentially left with a fractional reserve banking system based on nothing but fiat money. The only thread left connecting money to gold was on the international state level where the US Dollar was still redeemable into gold.  With the Bretton Woods system, the exchange rate of major different currencies was pegged to the US Dollar whereas the US Dollar was convertible into gold at $35/oz until 1968 when the peg was relaxed.  When president Nixon closed the gold window altogether in 1971, all monetary ties to gold had been removed.

The below chart illustrates what happened to the US Dollar after the peg to gold had been removed. The US Dollar lost 93 % of its purchasing power (as measured in gold) in the years following 1968. 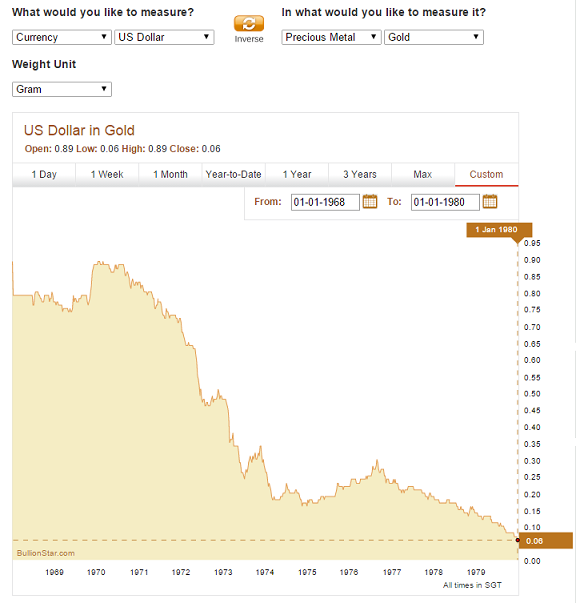 The US Dollar however kept its position as the reserve currency of the world on no other merits than its legacy, the premise of cheap oil and easily available credit to all.

Economics Got It Wrong

In my previous post, I blamed economists (barring myself and a few others only:-)) for providing intellectual support to the fiat currency system. This time around, I must again criticize the teachings of mainstream economics.

Under a gold based reserve system, the gold holdings of a country running trade deficits decrease. The country is clearly punished in terms of future consumption ability.

Under a fiat currency system, the currency of a country running trade deficits, i.e. importing more than it’s exporting, is supposed to depreciate according to mainstream economics. This would make imports more expensive and exports cheaper for others to buy. The currency would thus automatically rebalance the trade deficit.

Many fellow gold industry colleagues and gold bugs are quick in blaming the US for causing these monetary imbalances by living beyond their means.

I disagree. Correlation is not causation.

You have to ask yourself, how can the US possibly sustain a perpetual trade deficit without its currency depreciating?

The US doesn’t actually have much pricing power over its currency.

Why is anyone willing to save in worthless fiat denominated paper promises in the first place? How’s the credibility of the US government for example?

The prominent Austrian economist Antal Fekete, whose writings I strongly advice anyone with an interest in monetary economics to study, is arguing in this piece that “only simpletons would on their own free will choose to save in the form of hoarding irredeemable promises, whether the promise has been issued by a bank or directly by the Treasury.” Fekete furthermore correctly points out that paper promises ultimately lose all their value.

Fekete is certainly right that paper promises, such as fiat currencies, ultimately always lose all their value but that in itself doesn’t mean that people are foolish to save in US dollar denominated assets short term.

Most of our money today is created as debt out of thin air under the fractional reserve banking system.

The money supply in a monetary system building on fiat money must always grow. Fiat is only accepted as long as there’s a promise of more to come. The whole fiat monetary system is building on the assumption of another greater fool readily available to pass on the money and paper assets to indefinitely.

If there wasn’t such a promise of growth or interest, there would be no reason for anyone to relinquish their ownership of cash merely holding a fiat claim to receive the same amount of money in the future as they could receive today.

As long as the fiat grows, all is good. When the tide turns, the squeeze to cash the fiat claims will be immense.

Sure, the US government can appropriate money through taxation but the national debt is so high that it can never be repaid in any medium remotely resembling the purchasing power of today’s dollar. Reasonable people know this but as long as they are convinced that the party of easy credit will continue, they make a prediction that they can buy more in the future than they can today if they continue to hold their fiat denominated assets. Supported by lowered interest rates and money printing, they’ve made a correct prediction for quite some time. Where they may be mistaken is that the party will continue indefinitely or that they can get out in time.

The prominent blogger FOFOA covering FreeGold on his blog calls this phenomenon of holding on for the future “Credibility Inflation“. As long as confidence in the fiat system is expanding with the expectation of a higher payoff tomorrow than today, the system stays intact. Excess fiat is saved or “invested" and thus doesn’t immediately flood the market for goods and services. Credibility inflation thus explains why the massive monetary inflation we’ve seen the last decades hasn’t been matched with as high price inflation. What we have to watch though is when savers revert back to the buy now mentality which will be the snap back into price inflation.

A few posts ago, I flirted with the argument that many central banks and central bankers actually understand the dynamics of the monetary system. They understand that using the US Dollar as reserves are skewing the system and they are preparing for its collapse. This is e.g. apparent by the ECB marking gold to market quarterly. When debt based assets implode and gold revalues, the balance sheet of ECB will stay healthy because the gold reserves will immediately balance the destructing debt based fiat reserves.

Rejuvenation of the Monetary System

So how can the monetary system be rejuvenated?

Gold is the ultimate wealth asset that you can count on preserving value for generations and I agree with the analysis brought forward by proponents of the Austrian Economic School that irredeemable fiat currency is inferior to gold. A gold standard is keeping governments in check to some degree. Governments can’t overspend as much under a gold standard as they can under a fiat currency system or they will lose their gold reserves. Banks can however still create debt circulated as money under a gold standard but perhaps to a lesser degree than under a system where fiat alone serves as reserves.

The general population certainly have better prospects protecting themselves from reckless government and bank behavior under a gold standard, than under a fiat standard, by simply withdrawing their gold deposits assuming they do it in time.