LBMA colludes with the COMEX – To lockdown the global gold market?

With unprecedented physical gold demand across the world as wider financial markets collapse, coupled with severe precious metals supply shortages and the closure of the world’s major gold refineries, it was only a matter before pricing problems would flare up in the fictitious and flawed paper gold markets of the LBMA in London and the US COMEX, as we warned about here, here and here over the last couple of weeks. And indeed warned about here, exactly 3 years ago this month.

For when you trade limitless synthetic unallocated gold and de facto cash-settled gold futures in a tag team shakedown, as the COMEX futures / London spot OTC brothers continually do in the CME and London Bullion Market Association (LBMA) controlled venues, while providing fictitious price discovery when the physical gold market is on fire, and there is no gold supply to be found, then there is no alternative but that you are going to get burnt.

So it is far from surprising to see what we are now seeing in the gold market – the LBMA-COMEX chuckle brothers beginning to get slammed, with one covering for the other as both reach for the ropes.

Those who look at gold prices may have seen the signs first, an unusual divergence that began on Monday (23rd March) between the US dollar spot gold price (XAUUSD) and the price of the most active COMEX gold futures contract (April GC), with the spot price falling noticeably below the futures price, at first by between $5-$7, than by $10, and then as the day wore on by up to $20.

However, this was only the beginning, for in the early hours of Tuesday morning eastern time (New York and Chicago), the spot gold price fell by $30 below the COMEX futures gold price, then by $40 as the London gold market came on-line, then by up to $80 in the London morning as you can see in the chart below (blue line is spot, green and red line with bars is futures). Notice the huge divergence over 23 March and 24 March.

This spot gold price to futures gold price divergence continued to gape strongly all through the Tuesday trading day (24th March) with buy-sell spreads on spot gold also blowing up to at times $100, causing bewilderment among MSM reporters, and market watchers scratching their heads trying to find explanations, with Kitco News claiming that there were:

“unconfirmed reports that London spot gold price quotes have become unreliable or have been pulled as U.K. market-makers shut down due to the Covid-19 outbreak"

But how could any of this be true given that the LBMA was guaranteeing the “continued smooth functioning of the Loco London precious metals market in light of the Coronavirus (COVID-19) outbreak“ with its ‘London Market Business Continuity‘ plan?

Ross Norman of Sharps Pixley in London was more revealing in his choice of words, saying that:

“Evidently the lack of liquidity in the spot market has meant that market-makers are clearly reluctant to take on a trade. With physical supply much diminished, it follows that taking on a position carries significant inherent risk"

With the spot price seized up, enter stage left the LBMA with the strangest of announcements during Tuesday morning, an announcement which was not on the LBMA website, but was circulated to various news outlets such as Kitco. The LBMA statement said:

“The London gold market continues to be open for business. There has, however, been some impact on liquidity arising from price volatility in Comex 100oz futures contracts. LBMA has offered its support to CME Group to facilitate physical delivery in New York and is working closely with COMEX and other key stakeholders to ensure the efficient running of the global gold market."

There are a number of strange things about this statement:

– How can the London gold market be open for business if LBMA market makers are not providing liquidity and not making a market in spot gold while COMEX gold price trades far higher?

– The lack of liquidity appears to be in London. Why is the LBMA deflecting attention from itself and the London market and pinning the blame on the COMEX, with its wording “impact on liquidity arising from price volatility in Comex 100oz futures contracts"?

– Why is the LBMA wanting to facilitate physical delivery in New York when its remit is the London Gold Market that trades gold loco London?

– Why is the LBMA colluding with the COMEX?

– Who are the other key stakeholders that the LBMA and COMEX are colluding with, as they say above?

– What does efficient running of the global gold market mean when it sure as hell doesn“t mean efficient price discovery for physical gold?

– Could it mean an efficient lockdown of the global gold market? 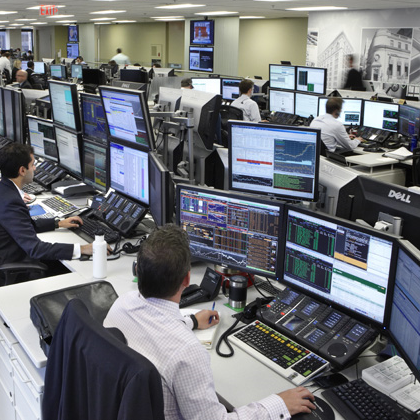 On Tuesday afternoon London time, Reuters, a frequent mouthpiece for the LBMA, entered the picture with an article about the spot price failing to keep up with the COMEX futures price. This, said Reuters Peter Hobson, was:

“a sign the market is worried air travel restrictions and precious metal refinery closures will hamper shipments of bullion to the United States to meet contractual requirements."

“if physical gold from London is needed to deliver against Comex futures contracts it has to be melted down from the 400 ounce bars used in London and recast as 100 ounce bars accepted by Comex."

This again is gobbledygook from Reuters. CME GC gold futures can trade OTC on Clearport and bullion banks can use EFPs based on gold in London (loco London) to settle the COMEX futures in London, especially during New York morning. And that can be 400 oz gold bars (London Good delivery bars), which are the standard for loco London settlement. At the end of the day its just a gold location swap.

Bullion Banks blow up on EFPs

Just ask the CME about EFP transactions. While this Reuters logic makes no sense, the following does. Juts after 10pm London time, Tuesday night, there was some news on Twitter from Roy Sebag with an explanation for why the spot price had been behaving so strangely.

2/2 Now there remains a big shortage in physical in the comex denomination so rumors are the Comex will announce a force majeure and allow banks to deliver LBMA bars instead. This should be announced imminently.

Roy“s explanation would suggest some bullion banks with short Exchange for Physical (EFP) positions blew-up. This could have accounted for the spot market seizing up as these banks stopped pricing and other market makers also stopped, and would explain the lower spot prices, and the ballooning of spot spreads. And would explain the LBMA stepping in. Most critically, this implies a breach of contracts on the CME, and an inability to deliver for the CME, hence the LBMA“s involvement to bail out the situation.

At exactly the same time as this information came to light, Reuters“ Peter Hobson was back with another article after jaw-boning with the LBMA, this time with an “exclusive“ headlined “CME pushed to change gold delivery rules amid coronavirus lockdown – sources“. According to Reuters :

“The LBMA and executives at major gold-trading banks asked CME to allow 400-ounce bars to be used to settle Comex contracts, said the two sources, both of whom were involved in the discussions."

Hilariously, the Reuters article also featured an anonymous quote from a bullion banker as follows, which is exactly what the LBMA said to me in Singapore in 2016:

”“It’s totally logical,” said an executive at a gold-trading bank. “In London there’s no shortage of metal.“”

But with nearly all  gold in the London gold vaults owned by central banks or Exchange Traded Funds (ETFs), there is just a small fraction of the physical gold in London underpinning the entire unallocated trading and clearing pyramid.

Finally, after not saying anything all day Tuesday, the CME has just published a press release announcing that it will imminently launch a new ´deliverable´ COMEX gold futures contract allowing delivery options of 400 troy oz, 100 oz and 1 kg gold bars. So this basically takes the COMEX 100 oz contract and adds the ability to settle using 400 oz gold bars, which will mean changing the contract specs section of chapter 113 of the COMEX rulebook. The new contract will trade on Globex and can trade on Clearport (OTC), and is subject to approval by the CFTC.

Remember, COMEX gold contracts rarely if ever go to physical delivery, and this new contract with its 400 oz option will be no different. They will merely add in some language that the approved bar brand list will use the LBMA gold good delivery list. They even say this straight up in the press release.

COMEX 100 oz gold futures contracts are deliverable in name only. In terms of COMEX gold futures trading, practically no contracts ever reach delivery. Just a few basis points of a percent. And delivery on the COMEX just means a warrant (receipt) from one of the approved COMEX warehouses changes hands. Getting any gold bar out of the COMEX vaults once you have a warrant is a totally different ballgame. The vast majority of COMEX 100 oz gold futures are never delivered, they are offset (closed out) and cash-settled, or else rolled over.  his is essentially the same as unallocated gold in the London market, both are just cash-settled gold derivatives. In fact, 100 oz gold bars are really not common at all. Why then would the LBMA and its bullion banks be even concerned about 100 oz bars that rarely ever get delivered.

So what is exactly going on here? Who is bailing out who? The same bullion banks operate in both markets. Is the LBMA bailing out some of its bullion bank members that have blown up while at the same time propping up the COMEX edifice? If so, with the LBMA just being a trade association with the bullion banks at the helm, where are the 400 oz gold bars coming from? The HSBC or JP Morgan vaults in London? Or that famous gold lender of last resort, the Bank of England?

Or is it just a management of perceptions exercise with no gold bars involved, to try to coax back the spot and futures prices by telegraphing that the gold that is backing the spot price (which is actually unallocated non-existent gold) is now also backing COMEX gold futures. While neither of the two can be delivered, the same non-gold now backs both, so voila, there is no need for any price divergence!