Gold replacing the US Dollar as reserve asset

The title to this blog post may feel contradictory as the US Dollar has appreciated against all other major currencies during the last year. One year ago, it took 74 euro-cents to buy one US Dollar, today it takes 89 euro-cents. 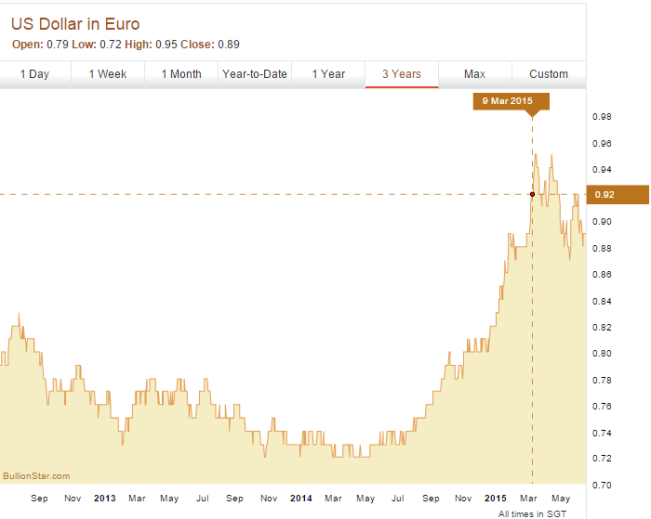 The US has for most of the last half century been running perpetual trade deficits building up their close to USD 20 trillion national debt with another USD 100-200 trillion in unfunded liabilities. This shouldn’t be possible according to standard economic theory as the US Dollar would be supposed to depreciate to mitigate the trade deficits.

Who’s at fault for this situation? Are the US responsible for running these trade deficits? The trade deficit is a result of private businesses importing and exporting trying to optimize their business performance. Nothing wrong there.

Considering the currency, the US has actually been very hands off when it comes to currency interventions, mainly interfering in 1978  after the US Dollar declined significantly in the wake of European central banks stopped buying dollars.

Public vs. private support of the US Dollar

The best sign of a currency being overvalued is that it’s running trade deficits that aren’t corrected by the currency depreciating.

Trade surplus countries have for many decades been soaking up US Dollars keeping them as reserves with the effect of hindering a depreciation of the US Dollar.

Economic theory states that the market would depreciate the currency of a country continuously importing much more than it exports. With a depreciating currency, it would be more expensive to import and cheaper for other countries to buy exports which would balance trade. This isn’t happening in the US though. Why?

The reason is the demand for the US Dollar as a reserve currency by the rest of the world. Surplus countries like China and Russia have been placing its excess reserves in US Dollar denominated assets thus keeping up demand for the US Dollar hindering it from depreciating. The exorbitant privilege of the US being able to live beyond its means is thus not the ‘fault of the US’ but the effect of the rest of the world demanding US Dollars.

This has however changed. In the last two decades of the 20th century, Europe was building up its US Dollar reserves giving the US Dollar structural support. In the 21st century, it’s mainly been China buying up the US Dollar denominated debt. This has changed during the last 4 years though as China is no longer increasing the amount of US debt held but keeping it constant at about USD 1.2 trillion. The structural public foreign support for the US Dollar is thus largely gone. Instead there’s been a high private appetite for US debt in countries with even higher uncertainty than the US like developing countries in the Latin and South America, in the Middle East, Asia and elsewhere.

When this private support for the US Dollar wanes, there’ll be no one to pick up the slack. With less demand for the US Dollar, the result will be that the US Dollar will depreciate significantly. I expect it to hyperinflate to the degree of almost completely losing its purchasing power. The currency of other countries, especially those holding US Dollars as reserves, will also hyperinflate.

But what if the US Dollar would start to depreciate quickly. Couldn’t the US just start to intervene buying dollars to keep the dollar strong? No, it can’t because the matter of fact is that the US actually have very little in terms of foreign reserves.

As the value of the US Dollar plummets, the US dollar will lose its role as reserve currency. At the same time gold will naturally re-emerge as the settling unit for international debt and as a store of value.

Central banks will not actively back their currencies with gold but gold will replace foreign currency reserves. By buying gold today, central banks are extending their power through the next paradigm shift. When the value of their fiat currency reserves is diminishing through hyperinflation, the value of their gold will keep their balance sheets intact.

Many of the high debt countries like e.g. Greece, which look bad in today’s fiat currency context, will actually fare well in this transition of gold taking over the reserve asset status from fiat currency. Greece is holding 112.5 tonnes of gold which is equivalent to 66 % of its reserves which is among the highest proportion of gold to total reserves for any country worldwide. Greece is thus wise in keeping its gold but taking a hit in a currency context for it may very well be a powerhouse tomorrow when whoever has the gold will rule this world!

Fiat currencies are dying. It’s just not visible to most people yet. The coming gold reevaluation will play a large role over the next decade when gold once again become the reserve asset of the world leaving fiat currencies debasing in hyperinflation.

If you have savings in fiat denominated assets today, please consider your risks. If you keep funds with a bank, broker or financial institute, your counterparty risk is immense.

The biggest risk may however be your own perception of value. If you have savings of 100,000 today, you are most likely valuing it at what you can buy today. The real value of your 100,000 is however not what you can buy today but what you can buy in the future when you use the funds. There is thus a big uncertainty of its value. History has shown that once people start to question the value of paper money, they prefer to spend it and in the process accelerate an inevitable chain of events leading to hyperinflation. If you feel wealthy by the illusion of paper assets today, remember that it’s just a short term illusion that will be long gone a generation from now. Don’t count on timing the paper market better than your neighbor. The exit will be narrow and few people will get out in time.

With central banks buying and repatriating gold, it’s apparent that the central banks are already preparing for this transition of gold once again becoming the primary reserve asset.

By buying gold, you can ensure that you transition your savings through the paradigm shift from fiat to gold much in the same way as the central banks!