LBMA Alchemy and the London Gold and Silver Markets: 2 Steps Back

“Did you think that the high-powered world of the LBMA would operate in a fishbowl for all to see?

Thoughts of ANOTHER – October 1997

In both cases, the new auctions, which the LBMA were quick to maintain control over, were trumpeted by the bullion bank controlled LBMA as ushering in an era of improved transparency in gold and silver price discovery within the London Gold and Silver Markets, a marketplace which dominates in setting the international gold and silver prices.

The LBMA Gold Price and LBMA Silver Price auctions are both critical to the world of precious metals, because they derive benchmark reference prices for gold and silver which are used extensively in the valuation of everything from Exchange Traded Funds (ETFs) to OTC precious metals contracts.

The benchmarks are also used as reference prices in all sorts of transactions from sophisticated wholesale market transactions of central banks, refiners and miners, to small quantity gold and silver coin purchases in bullion dealer shops all over the world.

Both benchmarks are also ‘Regulated Benchmarks’ under UK financial market regulations as “policed" by the UK’s Financial Conduct Authority (FCA).

It was therefore surprising that last week on 1 March, ICE Benchmark Administration (IBA), the administrators of the LBMA Gold Price and LBMA Silver Price auctions, issued a ‘Notification’ announcing that from 1 April 2018:

“the LBMA Gold and Silver Prices will not be available on the LBMA website until midnight London time on the date that the prices are set.“

More extensive quotes from the IBA Notification are as follows:

“Please note that effective 1 April 2018, the arrangements for delayed redistribution of the LBMA Gold Price and the LBMA Silver Price will change so that the delay period increases from 30 and 15 minutes to midnight London time."

“Any public websites that display the LBMA Gold Price and the LBMA Silver Price (currently with a 30 minute and 15 minute delay respectively) will be required to delay prices to midnight London time."

So instead of a 30 minute delay, starting on 1 April (April Fool’s Day) the price for the morning LBMA Gold Price auction will not be available until about 14 and a half hours after the auction completes. 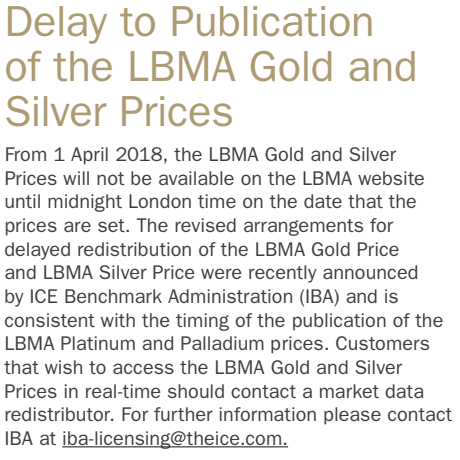 For the afternoon LBMA Gold Price auction, the price will only be available to the public about 9 hours after the auction finishes. For the LBMA Silver Price auction, the lag time on the public being able to see the daily reference price will now be 12 hours instead of 15 minutes. That’s a whopping 40 times longer. If only this was an April Fools joke. Alas, it’s not.

Any rational person would therefore conclude that the changes to the auctions being forced in by ICE Benchmark Administration (IBA) can only be described as torpedoing the concepts of price transparency and price discovery.

It should also be remembered that although IBA is the auction administrator, IBA would never make these publication time changes without the blessing of the LBMA, since the LBMA is the intellectual property owner of the benchmarks and the ultimate authority on these benchmarks as well as the gatekeeper on who can take part in these auctions.

The LBMA website also references these price time changes, but as per usual the LBMA tries to pass the buck and spin the changes as being in some way logical. For the LBMA says in the latest issue of the Alchemist, that:

“The revised arrangements for delayed redistribution of the LBMA Gold Price and LBMA Silver Price… recently announced by ICE Benchmark Administration (IBA)… are consistent with the timing of the publication of the LBMA Platinum and Palladium prices."

As a reminder, the LBMA also controls the worldwide pricing for platinum and palladium through the LBMA Platinum Price auction and the LBMA Palladium Price auctions, both of which were awarded to the London Metal Exchange by the LBMA in 2014 during a secretive and non-competitive tender process.

The publication time (to the public) of the platinum and palladium prices is indeed midnight on the day the auctions occur. As the LBMA website states:

“Since 13 July 2015, the prices on the LBMA’s website are displayed with a delay until midnight following the setting of the prices each day."

Why the worldwide platinum and palladium user base is not up in arms about these platinum and palladium price delays, only they can answer. But it is certainly a spin too far to think that anyone will accept the warped alchemy of the LBMA that because the LBMA Platinum and Palladium prices are ‘freely’ published only at midnight, that somehow this validates the decision of the IBA / LBMA to also roll back transparency in the LBMA Gold and Silver auctions to midnight.

It’s also comical that the latest issue of the LBMA’s Alchemist magazine published last week contains an article promoting the LBMA Gold and Silver actions with the audacious title of “INCREASING TRANSPARENCY AND BUILDING CONFIDENCE IN THE AUCTIONS“.

Overall, this price publication time rollback is farcical, but not surprising in the world of the LBMA where black is white and where a step backwards is spun as a step forwards. This development might also be humorous if it wasn’t so important. Especially as the changes are being implemented on 1 April, April Fool’s Day! But the auction prices are important and also very influential in the global gold and silver markets. Hence, it is no laughing matter.

London Gold and Silver Trade Reporting: Not in Your Lifetime

With no trade data, there is no market efficiency. How could there be any market efficiency when the market cannot analyse the trades that have taken place? Insider bullion banks are therefore free to trade gold and silver in the knowledge that the global markets don’t know what the insiders are doing. This also applies to the central banks in the London Gold Market in their buying and selling and lending and swaps transactions. So the London Gold and Silver Markets are not ‘Fair’.

At the end of January, I wrote an article titled “What’s Happening (or Not) at the LBMA: Some Updates" which in part discussed the broken promises on trade reporting made by the LBMA over the last 2-3 years, and the complete lack of progress that the LBMA has made on actually publishing any trade data to the Market. As early as January 2015 (over 3 year ago), the LBMA stated to the UK Regulator’s “Fair and Effective Markets Review” (FEMR) at that time that it would:

“welcome further transparency through post trade reporting, providing the industry with data that at the moment does not exist for the bullion market."

During the course the next 3 years, the LBMA made many promises about publishing this trade reporting data, none of which came to pass.

For example, in February 2016 for trade reporting, the LBMA claimed that there was a “target delivery date in the second half of 2016”. This never happened.

The next broken promise, made at the LBMA annual conference in October 2016 claimed that"Phase 1 will focus on reporting and will launch in Q1 2017. This reporting covers all Loco London Spot, forward & option trading." This never materialised.

This was followed by a litany of further promises during 2017 from the LBMA CEO, the LBMA Chairman and the LBMA Legal Counsel that all promised a publication date for trade reporting of early 2018. In May 2017, the LBMA CEO said that “Reporting will begin later this year in a phased approach and, following a period of quality checking the data, it is expected that it will be published in early 2018.“

In August 2017, the LBMA Chainman said that “it is expected that the first data will be published in early 2018“. At the LBMA’s annual conference in October 2017 in Barcelona, the LBMA’s Legal Counsel said that “the data will then be aggregated and published but not until Q1 2018.“

Now that the first quarter 2018 has come and nearly gone, you can probably guess what has happened. The correct answer is …nothing has happened, with the LBMA again totally disregarding its own promises and now unbelievably shifting the trade reporting publication date out an entire year more to “early 2019“. You couldn’t make this up.

And as per usual, there was no LBMA press release about this further delay, only a small reference buried in the back of the latest issue of its in-house magazine, The Alchemist. As per the reference:

“Many members have already begun to report their trades to the LBMA-i platform and many members are being on-boarded. The reporting process will continue during 2018 with a view to establishing a robust data set which will be published in early 2019“. 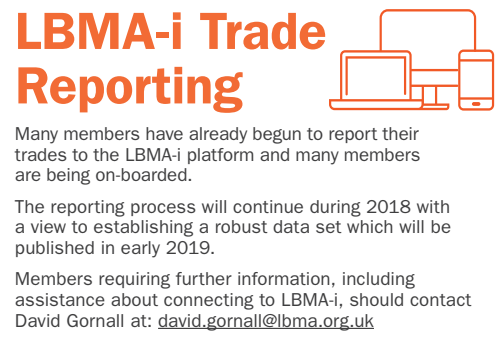 Nothing more can be said about this trade reporting fiasco other than it must be obvious to everyone that the LBMA and its bullion bank members do not want the transparency that gold and silver trade reporting would provide. Otherwise they would not have spent 4 years on a project which any individual investment bank could start and complete within less than 3 months.

As I said in the conclusion of my January commentary on this topic:

“In this extremely long drawn out exercise by the LBMA, it must be clear by now that the LBMA and its trading members are engaging in this trade reporting project on their own terms, and with little regard for the spirit and recommendations of the Fair and Efficient Markets Review. There is also a trend of missed deadlines, broken promises, and a lack of explanation for the delays.“

To this you can now add another year (to early 2019). Will we be saying the same thing in early 2019, of more missed deadlines? Based on the LBMA’s track record, any bookie worth their salt would probably say ‘Yes’.