What to make of the staggering US trade deficit?

March 2015 Data
When the imports and exports figures of March were released, the world was taken aback when the United States announced that their trade deficit has ballooned $51.4 billion, a 43% increase from February, where the deficit was “only" $35.9 billion. Though there was a slight jump in exports, from $186.2 billion to $187.8 billion, imports increased 7.7% from $222.1 billion to $239.2 billion.

How the data is calculated
Traditionally, the trade deficit acts as an indicator of the health of a country. High exports indicate that the products produced by the country is highly sought after. With this higher demand, manufacturers in the country would want to be able to expand their level of production to meet this demand. To be able to expand their level of production, labour would be required and by hiring, less people would be unemployed. The idea is then that a consistently high level of exports by a country has a positive impact on employment figures of the country. With the unemployment rate of the USA at 5.4%, there is a need for the country to try and boost its’ exports as one of the methods to target unemployment.

Why the huge deficit?
The deficit of $51.4 billion, which was the highest since October 2008 was indeed staggering. Two reasons were brought up as the possibility for the surge in this deficit. The first reason was the strikes by port workers in the West Coast of the United States. The 29 ports in that region, which process more than 70% of the imports from Asia, have seen slowdown in activities for the past 9 months and have only recently reached an agreement in February. Analysts predicted that once the ports return to their normal levels of activities, the backlog of imports will flow through, causing the surge in imports and hence widening the trade deficit. Here is a chart to show the level of imports that the West Coast ports handle. 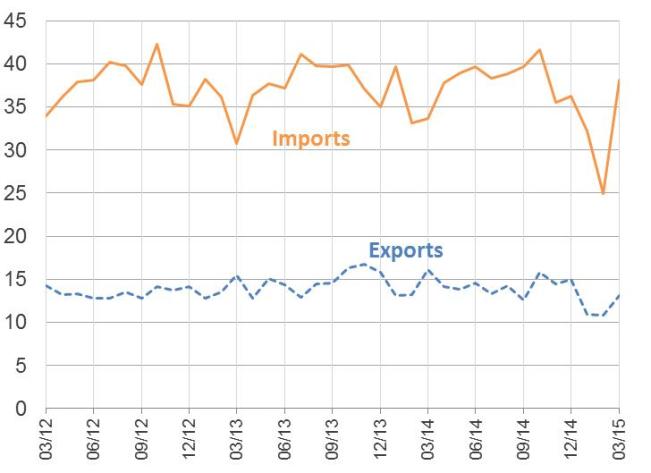 Another reason offered was the effect of the strong US dollar. A strong US dollar can potentially work against the trade deficit in two ways. For one, imports would be cheaper. A stronger US dollar meant that for the same amount, holders of the US currency would be able to purchase more foreign goods. This is likely to positively impact imports. At the same time, as foreigners would have to purchase US goods in the dollar, a strong dollar would make it less attractive for them to do so and subsequently hurt the level of exports for the country. This is likely what we saw from the March numbers.

What to make of it?

These disappointing figures seem to imply that the economy of USA actually shrank by 0.4%, rather than an expected expansion that is set to put the country on course for a 4% annualized growth. The key question from this incident is whether the trade deficit happened as a result of the strikes or if it signals a more severe fundamental problem with the economy. Or maybe, its just the weather.