Your Weight in Gold

The traditional phrase “worth your weight in gold” has been used since Roman times, and is a well-known saying signifying that someone or something is very valuable, helpful, or to be treasured.

But taken literally, what ‘value’ would a person be worth if they were worth their own weight in gold?

For a given gold price, the answer not surprisingly depends on the person’s weight, so a more suitable and relevant question might be what value would an average person be worth if they were worth their weight in gold?

Across the world, human weight data shows the regional averages for both genders from heaviest to lightest run as follows: North America, Oceania, Europe, Latin America, Asia, Africa. Taking simple averages of these regions for men and women, the average global weight for a man is 78.5 kgs (173 lbs), while the average weight for a woman is 69 kgs (152 lbs). 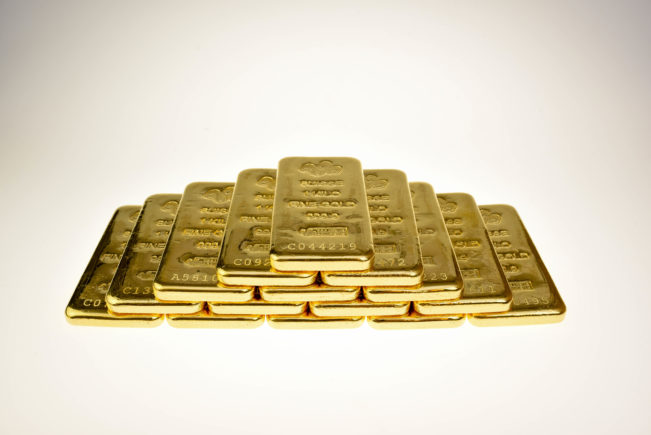 At the same gold price, a world average weight of 69 kgs (152 lbs) for a woman would mean that the average adult female would weigh approximately 2218  troy ounces, and would be valued at approximately US $3 million.

Most people will be familiar with the large gold bars that are stored in central bank gold vaults, such as the gold vaults of the Bank of England in London. These ‘Good Delivery’ gold bars are standard bars in the worldwide wholesale gold market, and although they are variable weight bars, each of these gold bars usually weighs in the region of 400 ozs. Assuming one of these gold bars weighs 400 ozs, then the average adult in our global weight calculation would weigh the equivalent of  5.92 good delivery bars. Let’s call it 6 Good Delivery gold bars, which would be a neat pyramid of 3 * 2 * 1 gold bars.

Similarly, when measured in terms of gold kilobars, the average adult from our calculation would weigh the equivalent of 74 gold kilobars.

Density refers to the amount of mass (weight) in a given volume. Gold has a very high density, 19.3 g/cm3, which is higher than most other metals. As an example, a cubic centimetre of gold will weigh 19.3 grams. Gold’s density is also 19 times higher than water, which is why gold panning works, since the gold will sink to the bottom of the pan and separate from other materials.

This can be referred to as gold’s value dense property, i.e. a small quantity has a high value. This also means that gold can be hidden easily. And that a small amount of gold worth a significant amount can be carried easily, i.e. gold is portable.

Gold’s high density makes it difficult to counterfeit, since few other metals can be substituted for gold as their densities are lower. One exception is the metal tungsten, which has a density of about 19.3 g/cm3, similar to gold. While tungsten is sometimes associated with gold bar forgeries, nowadays there are various tests and measurement apparatuses which can determine that a counterfeit bar contains tungsten and not gold.

In comparison to gold, silver has a density of 10.5, which explains why silver is bulkier and takes up more room to store. As the silver price is about 80 times less than the gold price, it also means that a high value holding of silver will require substantially more room to store than a gold holding of the same value. This also explains why silver storage fees in a vault are higher than gold storage fees.

Apart from the phrase “your weight in gold”, there are many other well-known idioms associated with gold which also convey gold’s high value and the esteem with which societies and civilizations have held gold in throughout history.

For example, as well as describing an actual gold standard where gold-backed paper currencies in many parts of the world up to the 20th century, the phrase “gold standard” is used metaphorically describe a standard of excellence by which other things are measured.

If a business or enterprise is referred to as “a gold mine”, it is because that business generates substantial profits or cash flow for the owners. Similarly, if someone is “sitting on a gold mine”, it means that they have land or property which is worth a considerable amount.

The terms ‘golden handshake’ and ‘golden parachute’ are now used widely in business to refer to generous departure terms when employees or executives leave a position of employment.

A “gold rush” is often synonymous with the frenzied pursuit of an investment opportunity or new investment sector, such as a gold rush on Wall Street, or the dot-com gold rush. Finally, to “strike gold’ is to find success or wealth through a deliberate endeavor or sometimes through luck.

Whatever the expression, the one thing that these well-known phrases have in common is that they allude to gold’s high value and rarity, and are immediately accepted and understood when used in the English language.