Do central banks understand gold? Do they care about gold? Are they “pro-gold” or “anti-gold”?

I will try to shed some light on this frequently discussed subject. In this first post, I will discuss the gold policies of some countries’ often pointed out to make the case that central banks are discouraging private gold hoarding or playing down the importance of the country/central bank holding gold as reserves.

Governments and central banks are frequently criticized by goldbugs for being anti-gold. Examples include the Indian government restricting gold import, the US government refusing to carry out a full audit of the US Treasury’s gold holdings and the Swiss government and central bank strongly opposing the “gold initiative” demands.

India, the US and Switzerland are all three on the top 10 list of official gold holding countries and thus relevant for the discussion.

The Indian government and central bank are notorious for repeatedly discouraging gold importing and gold hoarding. In trying to curb India’s trade deficit, the Indian government and central bank, Reserve Bank of India, are working together in pushing a policy they call “moderating gold demand”. There’s currently an import duty of 10 % on gold imported to India.

India, in a rare glimmer of common sense, however recently announced that it had scrapped the weird 80:20 rule mandating gold importers to re-export 20 % of their imports. The 80:20 rule was clearly instigated to complicate gold importing and thus make life difficult for jewellery and bullion importers.

It however didn’t take long until the government in March announced a new plan to require Indian gold customers to quote their tax code for gold purchases. According to the article as much as 80 % of Indian gold the demand however comes from rural customers lacking the so called PAN-number which would be a prerequisite for buying gold for more than equivalent to USD 1,600. By knowingly trying to make it difficult for a large share of the population to purchase gold, the Indian government is viciously attacking poor Indians’ only possibility of protecting the purchasing power of their savings.

Many Indian gold policies, including the 80:20 rule, originates from an interesting report on gold by the Reserve Bank of India published in 2013. Other recommendations in the report (p 56-59) included a need to design financial instruments and investor education for rural and urban gold buyers. Even though the report identified and anticipated some of the problems that have followed the “moderating gold policies”, such as increased levels of gold smuggling, these problems are clearly of less importance than the objective of introducing the banking system to rural India.

One of the recommendations in the report was to educate gold buyers better. Let me assist the Reserve Bank of India in their educational mission. Chart 1 below depicts the price of gold per gram in Indian Rupees since 1953.

A couple of generations ago in 1953, one gram of gold cost 5.40 Rupees. Today in Aril 2015, one gram of gold cost 2410 Rupees. (In reality, the cost is even higher due to the import duty and import restrictions carrying with them a high gold price premium). This represents a loss in purchasing power of the Indian Rupee with more than 99.8 % compared to gold. 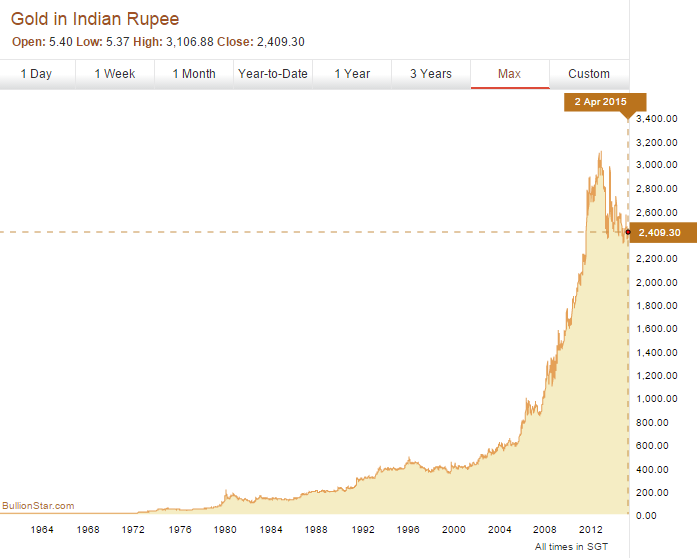 99.8 % loss in value compared to gold. Is this what the central bank wants to educate the Indian gold buyers on?

By aggravating, humiliating, criminalizing and punishing people for trying to keep the purchasing power of their savings, the Indian government stands out as the most anti-gold government among the top 10 countries holding gold in the world.

Switzerland has traditionally been known as a safe haven not only maintaining strong property ownership rights but also having a strong currency, the Swiss Franc, being backed directly or indirectly by gold. Switzerland was the last country requiring the central bank to keep a percentage portion of their reserves in gold and thus back the currency with gold. Switzerland had a law stipulating that the central bank had to hold at least 40 % of their reserves in gold until the law was abolished in 2000.

The gold initiative, which the Swiss people voted against in 2014, was categorized by the Swiss government and central bank as too far reaching even though it was only proposing a partial restoration with the central bank holding 20 % of their reserves in gold.

Despite the blip when the Swiss abolished the Swiss Franc’s peg to the Euro in January, Switzerland has joined other countries in pursuing a weak currency during the last decade. The Swiss Franc once known as an inflation resistant currency is nowadays no less of an intrinsically worthless unbacked fiat currency than any other currency. 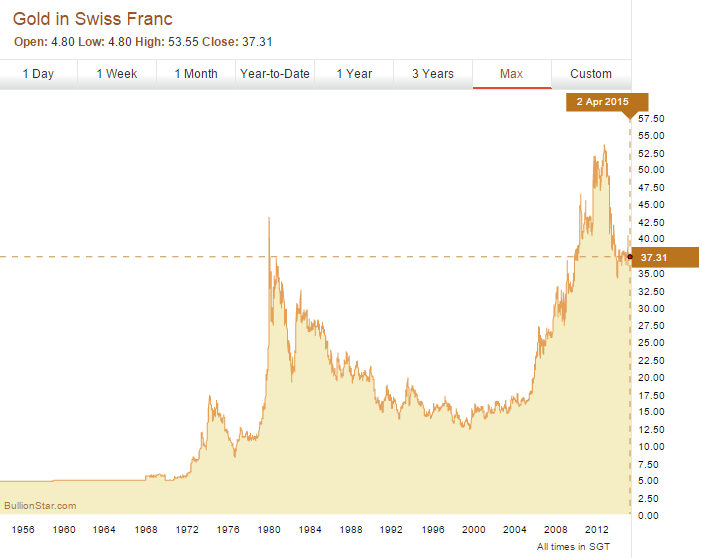 Why is the United States holding gold as reserves? Due to tradition if you were to believe the former chairman of the Federal Reserve, Ben Bernanke.

If gold is merely held because of tradition, why is the US so secretive about their gold holdings? There’s never been a full audit of the US Treasury’s gold reserves and the Federal Reserve is actively fighting all initiatives to increase transparency on US gold policy. Why? Is it because Fort Knox is the best guarded secret of no gold in the world?

US media are also quick to broadcast any negative news about gold. Pieces like this filled with random noise is the norm. Let’s take a look at how the USD has performed if measured in gold grams since 1953. 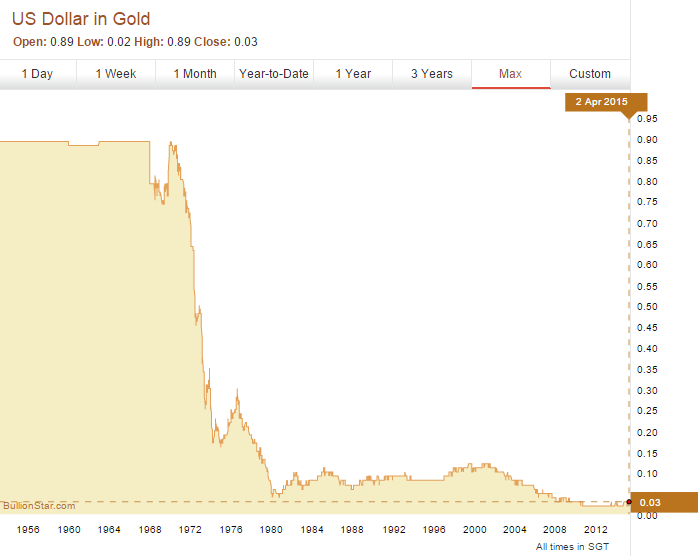 To summarize, India is the country in the world most openly discouraging its population to hoard gold but other countries like Switzerland and the US have also adopted policies which can be described as anti-gold.

In the next post, I will take a look at some countries going the opposite way increasing their gold holdings and encouraging the general population to buy gold.