The much awaited Chinese Gold and Silver Pandas for 2016 have now been released! Last year, the manufacturer, China Gold Corporation, surprised collectors with their decision to remove the weight and purity inscription on the reverse side of the coin. For this year’s edition, China Gold Corporation once again surprised by revising the weight distribution of the coins.  The 2016 Chinese Gold Pandas are minted in 30 gram, 15 gram, 8 gram, 3 gram and 1 gram while the 2016 Chinese Silver Pandas are minted in 30 g! This represents a shift from the troy ounce system to the metric system. The Chinese Pandas are the first coins in the world to be minted in such weights. 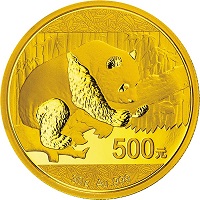 Collector and investor sentiment following the change to the metric system remains to be seen. Will it be popular enough that other mints feel inclined to follow suit? Or will the China Gold Corporation face criticism, like when they removed the weight and purity of the coin for the 2015 edition, and revert back to the troy ounce system? We will find out, come 2017!

The reverse of the 2016 edition features a single cute Chinese Panda resting on a tree branch. The weight, purity and symbol “Au”, which is the chemical representation for gold, is also featured at the bottom of the coin. On the obverse, the familiar Hall of Prayer for Abundant Harvests at the Temple of Heaven in Beijing is featured encircled by “People’s Republic of China" in Chinese and the year of issue, 2016.

The Chinese Gold Pandas come sealed individually in sheets of 10 pieces. Collectors normally don’t cut open the packaging as a coin in original mint seal may be slightly higher priced on the secondary market than a coin that doesn’t have the original seal.

The BU version of the Chinese Silver Panda was first minted in 1989 and with the exception of 2001 and 2002, the design of the Chinese Silver Panda has changed every single year. Beginning with a very low mintage of just 250,000 coins when it was first minted in 1989, the mintage for the Silver Panda has increased to a maximum mintage of 8,000,000 coins for 2016. While this may sound like a large number, it can be noted that other bullion coins like the Canadian Silver Maple and the American Silver Eagle have a mintage of over 25,000,000 and 47,000,000 coins respectively.

The packaging for the 2016 edition of the Chinese Silver Panda has changed from a sheet containing 30 coins to a box containing 15 pieces. This has several advantages to collectors. The boxes will allow for easy storage and the box will be more visually appealing than the old sheets. Combined, these two factors should help to drive sales.

Although produced as a bullion coin, the Gold and Silver Pandas tend to be a popular collectors coin and assume a high premium for previous editions. The Chinese Gold Panda 2013 – 1 oz, in stock at BullionStar, exemplifies that there’s a higher premium for previous editions. An important factor affecting the price premium is the uniqueness of the coin. The 2013 edition was e.g. the only Panda coin ever to feature 3 Pandas on the coin making it unique.

Whether you are a collector looking for interesting coins, investor buying for metal value or speculator buying for future value appreciation, the Chinese Pandas are a great choice!

As always, BullionStar is committed to bringing you the Gold & Silver Pandas at great prices. You can read more about the different coins and place your orders under the respective product pages below: