Also known as Lunar New Year, the date on which Chinese New Year falls each year is variable since it follows the Lunisolar calendar, hence the New Year festival is a movable event. However, Chinese New Year usually falls somewhere between 21 January and 21 February and the date is calculated based on the occurrence of a new moon.

This year, Chinese New Year is on Friday 16 February and marks the beginning of ‘Year of the Dog’ and the completion of the preceding ‘Year of the Rooster’. The Chinese calendar follows a 12-year repeating cycle and is also associated with 12 animals of the Zodiac (Sheng Xiao), with each year in the cycle represented by a different animal. The Year of the Dog is the 11th year in the Zodiac cycle. Next year in 2019, Chinese New Year falls on 5 February, and marks the beginning of the ‘Year of the Pig’, the final year of the cycle.

People born in the upcoming Year of the Dog are said to be loyal, honest and friendly with a sense of responsibility as well as being intelligent, independent and decisive. And across China, dogs are also considered auspicious and associated with good fortune.

New Year’s Day in China also marks the beginning of the Spring Festival. During Spring Festival, there is a 7 day public holiday across mainland China, beginning on Lunar New Year’s Eve and ending on the 6th day of the new lunar year. This year, the New Year public holiday starts on 15 February and lasts until 21 February. The actual Spring Festival then continues and runs up to the 15th day of the new lunar month which coincides with the traditional Lantern Festival. This year the Lantern Festival is on Friday 2 March. 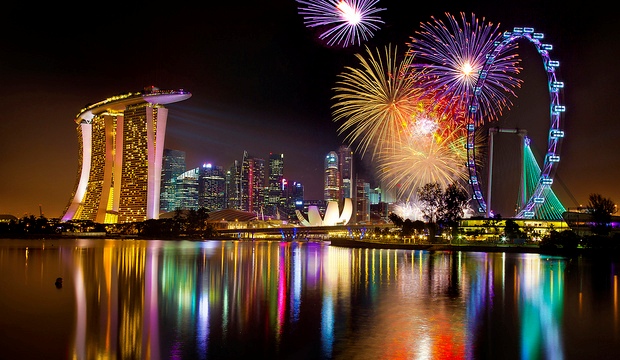 Customs and Traditions across the Spring Festival

Chinese New Year celebrations are predominantly associated with the colour red. Red is traditionally thought to bring good luck and good future while scaring away evil and bad fortune. This tradition is associated with the story of a mythological beast Nian which in Chinese folklore was scared off by the use of red items and loud noises. Hence New Year’s celebrations incorporate red bunting, red hanging lanterns, dragon dances and loud displays of fire crackers, and its also common in China to see red cloths hanging at the entrances to houses during New Year’s festivities. Wearing red clothes is also popular over the festival and is thought to bring good luck.

In China, the New Year festivities incorporate various customs and traditions symbolising the renewal of a new year, the passing of an old year, and the cultivation of good luck. In the week before New Year, people traditionally clean their houses as a way of cleaning out the old. New Year is also a popular time to purchase new items as it signifies a new beginning and the welcoming of a new year.

The gifting of money-filled red envelopes is also popular during New Year across China. These gifts are thought to bring good luck to the recipient, hence they are known as lucky red envelopes. An amount containing the number 8 is particularly auspicious as the number 8 is thought to be lucky and bring prosperity. But apart from the money, the red colour of the envelope is also associated with good fortune.

The days leading up to New Year are a time of immense travel within China with millions of people on the move as they return home to their families and relatives to celebrate. A particularly important event during this time is the traditional ‘Reunion Dinner’ which takes place on New Year’s Eve, and is a traditional dinner celebrated together with family.

Chinese New Year is also one of the most popular times in China for buying physical gold, gold for gift giving, but also for investment given that it’s an auspicious time of the year. At the retail level, Chinese gold demand at this time of year sees a noticeable peak as people across China rush to buy gold bars and buy gold coins, especially for gifting.

Swiss gold refinery PAMP is one of the best known and most prestigious gold bar brands on the market and is especially popular across Asia. This year PAMP celebrates  the ‘Year of the Dog’  with a beautifully designed high relief gold bar portraying a dog motif on both the front and the reverse of the bar’s surface. These Lunar gold bars are ideal for gifting and for celebrating the good fortune associated with Chinese New Year.

Available in both 100 gram and 1 ounce weights, PAMP’s Lunar minted gold bars contain .9999 pure gold and capture the dog’s symbolic qualities of loyalty and friendship. The intricate design on the front face features a portrait of an adult dog sitting in front of a kennel. The reverse of each Lunar gold bar cleverly reveals, through a reverse angle of the same scene, a puppy in the kennel sheltered behind the parent dog.

The bars reverse face is also embossed with PAMP’s refinery logo, the weight and purity of the bar, the bar’s unique serial number, and the Swiss assay mark and guarantee of authenticity Essayeur Fondeur.

The MapleGram 8 from the Royal Canadian Mint is a particularly stylish set of 8 Maple Leaf gold coins presented within an attractive red and gold display card and designed around a Chinese New Year theme. Each of the 8 gold Maple Leaf coins weighs 1 gram and contains 9999 fine gold. Each of the 8 coins in the set also has its own unique 8 digit serial number. The red and gold design of the MapleGram 8 signifies luck and good fortune, while the presence of 8 coins references the auspiciousness of the number 8 in Chinese culture.

Another attractive gift option for Chinese New Year are the very popular Lunar themed bullion coins from Australia’s Perth Mint, which for 2018 celebrate the Year of the Dog. These coins are the 11th in the Perth Mint’s current series of Lunar bullion coins.

Also in celebration of Chinese New Year, the Perth Mint has produced a 2018 ‘Year of the Dog’ Silver Lunar coin available in weight denominations of 0.5 oz, 1 oz, 2 oz, 5 oz, 10 oz, and 1 kg, all of which contains 99.99% silver and have a superior finish. The reverse of the 2018 Silver lunar celebrates the new Zodiac with a handsome portrayal of a German Shepherd dog and pup. The coin also displays the Chinese character for “Dog", with a circular inscription underneath of “Year of the Dog". While gold is more popular for gifting at New Year in China, silver coins, especially the bigger ones such as the 1 kg Silver Lunar for 2018, can also be gifted.

In terms of gold bullion and China, Chinese Panda gold coins are undoubtedly the most famous Chinese gold product on the international market, and would make interesting gift ideas for Chinese New Year. Minted in China by Shenzhen Guobao Mint, this Mint is part of China Gold Coin Corporation, which in turn is owned by the Chinese State.

Each year the design on Chinese Gold Panda coins changes, with the reverse of the new 2018 coin featuring a powerful portrait of a Giant Panda feeding on a bamboo shoot. The front of each Gold Panda coin features imagery of the Hall of Prayer for Abundant Harvests in the Temple of Heaven in Beijing.

The Year of the Dog is also celebrated in a new 1 kg Silver Lunar Stacker Bar from the world-famous Heraeus precious metal refinery in Germany. Each of these 1 kg (32.15 ozs) Heraeus Silver Lunar bars contains 99.9% pure silver and has the words “2018 Year of the Dog” embossed on the bar’s front surface along with the bar’s weight and fineness “1 Kilo” and “999 FINE SILVER” which encircles a stylised representation of a dog.

The reverse of each of these silver bars features an anti-forgery swirl pattern design for added security, and displays the bar’s unique serial number. The Heraeus Silver Stacker bar is designed for easy storage and comprises rectangular beveled surfaces that interlock for ease of stacking.

Also of interest for Chinese New Year is a 1 oz proof silver “Happy Chinese New Year – Lion Dance” coin produced by Victoria Mint on behalf of the Republic of Chad. The silver coin’s reverse features a colorized depiction of a traditional Chinese Lion dance which is synonymous with good luck and fortune, and the Chinese characters ‘新年快樂’ meaning ‘Happy New Year’. This proof silver coin has been produced by the Mint in a very limited issue of just 1000 coins. Each coin comes with a certificate of authenticity and is presented in a red velvet casing and outer box.