Imagine a country in which banks hold virtually no cash at all. A country where if you walk into a bank branch, the clerk will not be able to help you make a deposit into your account. A country where there’s a good chance that if you grabbed a wad of cash and walked into an electronics store or a major nightclub, they wouldn’t be able to assist you in buying a new computer or giving you a drink.

Welcome to Sweden, the land of virtual cashlessness! Although the Swedish Riksbank recently launched a full array of new and very colorful bills featuring celebrities such as famous children’s book author Astrid Lindgren and film director Ingmar Bergman, cash usage in Sweden is in absolute free fall, down from SEK 100 billion in 2010 to SEK 70 billion in 2015. Several factors have combined to lead to this development. 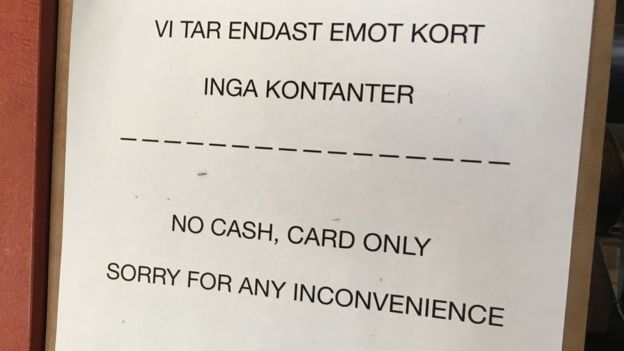 Some of these facts might sound unbelievable and even absurd for someone not living in Sweden: No cash in the bank? Homeless people accepting credit card payments?

But y es, Swedes seem extremely willing to accept new cashless payment technologies, such as credit/debit cards, as well as payment apps, while forgoing old ones, such as cash and cheques. All with little or no suspicion towards these new electronic payment methods.

Other countries have tried the same. Singapore tried, or at least planned to try a new electronic cash system named SELT or ‘Singapore Electronic Legal Tender’. In an OECD report issued in 2002, the Board of Commissioners of Currency (BCCS) – which was the sole currency issuing agency preceding the merger with MAS in 2002 – outlined the envisioned structure of the SELT system where the goal was said to be a reduction of physical cash usage and its handling costs.

As can be seen in the 2002 OECD report, the SELT system was in a very early conceptual stage and only outlined the concept in very broad strokes. But its interesting to note that as early as 1998, BCCS held a strategic planning seminar in which it set out its ‘corporate vision’ for the introduction of SELT within 10 years.

The 2002 report further stated that the SELT system was to be put in place in order to effectivize the cash currency system. The SELT system never came to fruition, and as is apparent  from statistics displayed further down in this article, the amount of cash currency circulating in Singapore has increased immensely since 2002. As have the amount of cash ATM machines, where there were far less than 2000 units at that time. The OECD report also mentions that although cash transaction costs in Singapore are extremely low, the cost to the economy of these ATMs was approximately SGD 656 million in 1998 and was projected to exceed SGD 1 billion by 2006.

BCCS envisioning a system such as SELT 15 years ago shows that they were ahead of their time and that Singapore government institutions are some of the very early adopters in trying to implement new technologies as well as eager to make their government institutions more effective. This is in line with the Smart Nation Objectives that Singapore has outlined. In contrast to Sweden, the Singaporean approach has been to adopt new payment methods such as e.g. card payments, while still being extremely welcoming for older payment modes such as cash or even cheques. Singapore’s very safe environment with extremely low violent crime rates makes it a nation that conveniently lends itself to cash payments.

However, as absurd as it might sound, the abolition of cash is slowly unfolding in many countries, with Sweden is probably at the forefront of this trend. Although a majority of stores in Sweden still accept payment in cash, there are an increasing number who don’t. Swedish law doesn’t require a merchant to accept payment in cash, which is a bit ludicrous considering that cash is still legal tender in Sweden. After all, legal tender normally means that whatever is legal tender should be good for the payment of all debts.

Now, if a merchant doesn’t want to accept cash in the form of nationally issued notes, then so be it. But what is shocking is that, as was mentioned at the beginning of this article, about 70-80% of all Swedish bank branches have removed all cash handling. All within just a few years. No, it’s not a typo. Walk in to a random Swedish bank branch and try to deposit or withdraw a larger sum of cash and up to 80% of the time you’ll get rejected with a polite “sorry, but this branch doesn’t handle any cash“.

Such branches only provide services such as financial advising, housing loans, credit cards services etc. The real aims of this strategy aimed to get money out of your pocket and into the pockets of the banks. Bank staff are pushed by their management to sell house loans, credit lines,  speculative paper instruments, and more savings accounts. This trend has also been evident in the extreme case of Wells Fargo’s recent banking scandal involving the concept of cross-selling accounts with the goal of every Wells Fargo customer holding a minimum of eight Wells Fargo  accounts. Why? Because, in the words of former Wells Fargo’s Chairman John Stumpf : ‘Eight is great!’.

All this means that if you open an account at a Swedish bank branch, you can only fund your account by either going to a branch that does handle cash, or by transferring money to the new account from an already existing account.

During the last 5-10 years in Sweden, M0, which is an aggregate measuring the amount of physical cash in an economy, has collapsed from over SEK 100 billion down to about SEK 70 billion.

Furthermore, statistics from the World Bank shows that the number for Automated Teller cash Machines has increased from less than 48 per 100K citizens, to more than 59 per 100k citizens in 2014. And the trend seems to be continually increasing.

The above data means that there are now more than 3200 ATMs island wide in Singapore as compared to less than 2000 units in 2004.

One argument for making an economy totally cashless is that it would cripple crime. Crime syndicates, burglars, drug dealers, petty thieves all rely on an anonymous paper cash system to sell their contraband. If we just eliminated cash paper bills, then drug dealing, robbery, burglary, even tax fraud would almost totally disappear. Right?

One of the most avid proponents of a total cash ban is a famous Swedish musician by the name of Björn Ulvaeus. Ulvaeus, is known as a member and founder of the super group ABBA (that ironically wrote the song “Money, money money"). A few years back, Ulvaeus’s son got robbed several times and some of his expensive music equipment was stolen. Ulvaeus’ rationalse behind banning cash is that if there was no cash at all, but only electronically traceable payment systems, burglars would not be able to sell the stolen items on the black market, and as such, the theft would have never occurred.

Although slightly confused, Ulvaeus is still onto something. In two opinion articles published in a major Swedish newspapers a few years ago, he mentions barter and its limitations.

However, history shows time and time again that humans have overcome the limitations of barter in numerous ingenious ways. Be it through using precious shells, stones or metals – such as gold and silver – or be it through local and informal credit systems, the challenges of barter have always been vanquished as long as the need and demand for such a system exists.

For instance, cheques issued by the army and used by British soldiers stationed in Hong Kong in the 1950s, started to circulate as a cash currency. The faith and credit in these cheques among local merchants was universal, so why bother with the inconvenience of cashing them in when you could let your supplier do that instead. Anthropologist Keith Hart tells the story of his brother stationed in Hong Kong in the 1950s. Keith’s brother was more than a little surprised when he one day he found a cheque signed by him 6 months earlier laying on the counter of a local bar with more than 40 other small signatures on the back stemming from each merchant that had legitimized the validity of the cheque. A game of confidence. A spontaneously arisen form of cash.

In jails, alcohol, sticks of cigarettes and more recently ramen noodles, are being used as currency. These goods arise spontaneously as the universally most sought after and can thereby be used as currency or money to buy anything else. No government, army, police or bank was needed to give these goods the status of money. They emerged spontaneously in the market place just as gold and silver have done so many times throughout history.

Today’s banking system is therefore showing itself for what it really is: A pyramid scheme where your money is used to speculate in questionable asset classes whose value is propped up only by the very investors (banks) that are buying into these asset classes with the help of money emanating from an endless pool of credit fueled by central banks’ artificially low or even negative interest rates.

Negative Interest Rates and Cashless Society: A Precursor to Hyperinflation?

When the negative interest rates of central banks spread to the commercial banks, a lot of people will naturally want to withdraw their money. As long as cash is readily available, this is not an issue. At least not as long as not everyone decides to withdraw their money all at once. But if cash use is highly limited, as per the example of Sweden, withdrawing your money will be hard or impossible. The resulting cashless or ‘cash strapped‘ society is effectively hindering a bank run to happen, as this in reality gives the banks a debt cancellation or at least a massive debt forgiveness, because remember, the balance on your account is the banks debt owed to you. If there’s no cash, then how can the bank pay its debt to you?

More on this in Part 3 of this series….