Money’s a matter of functions four,
A Medium, a Measure, a Standard, a Store.

– William Stanley Jevons, Money and the Mechanism of Exchange (1875)

As this simple poetic stanza rolls off your tongue in military-like cadence, it encapsulates the very definition of money with unrivaled precision and simplicity. This is Money 101.

Money is:
1. A Medium of Exchange
2. A Measure or Unit of Account
3. A Standard of Deferred Payment
4. A Store of Value

1. Medium of Exchange
If money was not used as a medium of exchange, goods and services would have to be exchanged through a barter system. Of course, the inefficiencies of that would mean that one must want exactly what the other has to offer, when and where it is offered, so that the exchange can occur. Money, as a medium of exchange, would fill that gap – hence medium – so that it can be used to facilitate a sale, purchase or trade between parties.

2. Measure or Unit of Account
Money helps us to assess and determine the value of goods or wants. It provides a unit of account by having a standard system that can measure goods or service of vastly different value with it’s different denominations – 10 cents, 1 dollar, 5 dollars, 100 dollars, etc.

3. Standard of Deferred Payment
A standard of deferred payment is the accepted way to settle a debt in a given market – a unit in which debts are denominated. Simply put, it is a standard for buying now and paying later. It is one of the defining functions of money; for example, while the gold standard reigned, gold or any currency convertible to gold at a fixed rate constituted such a standard. At present, as US dollars are not backed by gold or any other commodity, they draw value from being legal tender which allows the dollar to be used to pay off debts (See the inscription in the picture of the dollar notes below). What you get now is essentially debt used to pay off more debts and other debts. This is why our entire monetary system now is entirely debt based. We will touch more on this in subsequent posts in our Back to Basics series.

4. Store of Value
A store of value is the function of an asset that can be saved, retrieved and exchanged at a later time, and be predictably useful when retrieved and in transferring purchasing power from the present to the future. While our paper money at present is an asset that can store value – however questionable – Gold and Silver have acted as stores of value for thousands of years and remains so today. Let’s take a brief look at the origins of money.

A Brief History of Money
Myths, legends and rumours aside, the earliest administration of money that we have preserved till today is the Code of Hammurabi which was created ca. 1760 B.C. in ancient Babylon. This code formalised the role of money by setting interest on debts, fines for wrongdoing and compensation in money for various infringements of law back then.

The economy was based on commodity money, whereby animals, agricultural commodities and metals were used as money. Metals – where available – were favored for use as money over animals or some agricultural commodities because metals are durable, portable and easily divisible.  The use of gold as money has been traced back to 4000 B.C. when the Egyptians used gold bars of a set weight as a medium of exchange. This is why our very own BullionStar® Gold 100g minted bars are inscribed with the text “Money since 4000 B.C." 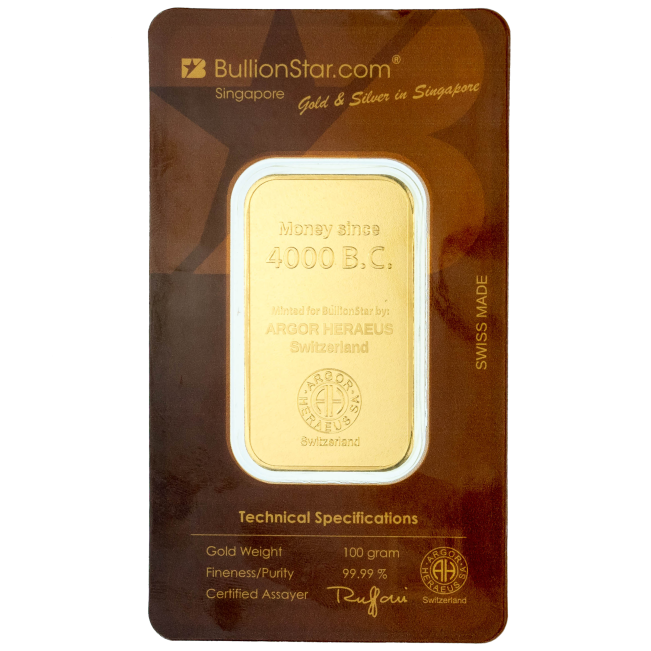 At present, even terms frequently used as a unit of account for money, such as Dollar, Shekel, Pound, originate from terms used to describe a set weight of a precious metal. For example, the British Pound was originally defined as a one-pound mass of silver.

Money Then Money Now
This is a dollar note from the 1935 shown below. Notice that it says “This certifies that there is on deposit in the treasury of the United States of America one dollar in Silver payable to the bearer on demand"

This is a dollar note now from the 2009 Series. Can you spot the difference? What exactly does this note give you now?