Venezuela exported 12.5 tonnes of gold to Switzerland on 8 March 2016, via Paris

Following on from last month in which BullionStar’s Koos Jansen broke the news that Venezuela had sent almost 36 tonnes of its gold reserves to Switzerland at the beginning of the year, “Venezuela Exported 36t Of Its Official Gold Reserves To Switzerland In January“, there have now been further interesting developments in this ongoing saga.

It has now come to light that on Tuesday 8 March, the Banco Central de Venezuela (BCV) sent another 12.5 tonnes of gold by air freight to Switzerland (via Paris), and fascinatingly in this instance, the exact details of the transfer are already available, including the cargo manifest, courtesy of Venezuelan newspaper El Cooperante which broke the news on 11 March.

As per the January gold exports to Switzerland, which most likely were part of a gold swap to generate much-needed financing for the crisis-ridden Venezuelan economy, this latest shipment appears likewise.

The BCV’s 12.5 tonne gold shipment was flown out of Caracas International Airport (Maiquetia Simon Bolivar) on Air France flight AF 385 to Paris, leaving at 5:49pm local time on Tuesday 8 March, and arriving into Paris Charles de Gaulle Airport at 7:54am on Wednesday 9 March.

The sender of the shipment was Banco Central de Venezuela, and the consignee (initial receiver) was Brinks Switzerland. Given that Brinks Switzerland was listed as the consignee for a flight arriving into Paris Charles de Gaulle at 8am, then there would have been a second flight from Paris to presumably Zurich in Switzerland which is the main destination airport for gold arriving into Switzerland. As giant Swiss refiner Valcambi says under Transportation Services, it provides “Import services and transportation from Zürich airport to Valcambi“.

The 3 immediate direct flights from Paris Charles de Gaulle to Zurich after 8:00am are Swiss Air flight LX 655 at 09:55, Air France flight AF 1614 at 12:55, and Swiss Air flight LX 639 at 15:05. Brinks has its operations centre headquarters in Zurich at Zurich Airport (and also a Geneva office at Geneva Airport).

The Cargo Manifest from Maiquetia Airport (Caracas International Airport) shows that the BCV’s gold shipment was described as ‘GOLDS BARS’, with tracking number 057-91145645, and comprised 12,561 kilos,  packed in 318 packets, which are listed somewhat surprisingly as being ‘caja de carton’ (which translates as cardboard box). Super-strong cardboard presumably.

If each bar weighed approximately 400 ozs, there would have been about 1,009 or 1,010 bars in the shipment. With 318 packets, and with 12,561 kgs = 403,845.53 troy ounces = 12.56 tonnes, then on average there were 39.5 kgs per packet (12561 / 318 = 39.5), which is a little but more than 3 bars per packet. But since gold bars can’t obviously be divided, then these gold bars may have been slightly larger US Assay Office bars weighing more than 400 ozs. Remember that the London Bullion Market Association (LBMA) Good Delivery specification for gold bars ranges from 350 oz up to 430 oz. Alternatively, most of the packets could have contained 3 bars each and the remaining packets 4 bars each.

However, the Air France website doesn’t return any data on other known gold shipments of Venezuelan gold, for example Air France tracking number 057-53208470 from late 2011, which was actually displayed on Venezuelan TV (see below bar code).  Therefore, tracking information on gold shipments may not be publicly available for security reasons.

It’s important to consider the extent to which this latest  BCV gold shipment may be scraping the barrel in terms of the BCV’s remaining unencumbered gold reserves. My theory at this stage is that the gold bars being sent to Switzerland are being sent to Swiss refineries to be refined into modern Good Delivery bars, and not to be refined into 1 kilo gold bars for the Asian market. This would be the case if all of the 160 tonnes of gold (in modern good delivery form) that had been repatriated during late 2011 / early 2012, was already in play (i.e. encumbered, under lien or claim or pledge).

This is assuming that the gold in transit are the gold legs of USD – gold swaps, whereby the gold is then held (and used) by a commercial bank counterpart or via some gold swap arrangement between the BCV and a commercial bank facilitated by the Bank for Settlements (BIS) in Basel. Furthermore, the legal wording of gold swaps would normally stipulate that gold held as part of a gold swap would need to be deposited into the gold vault of an institution such as the Bank of England, FRBNY, or the BIS’ storage facility at the Swiss National Bank etc. 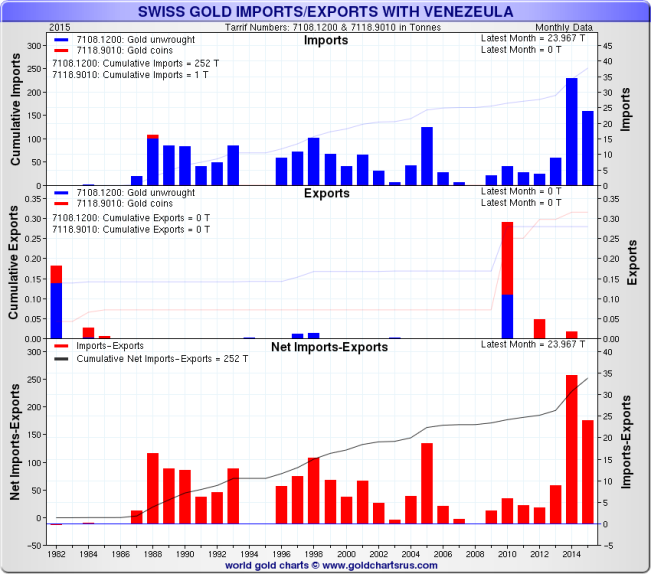 (For the above points, see “Venezuela’s Gold Reserves – Part 2: From Repatriation to Reactivation“)

Approximately 50 tonnes of BCV gold has been exported from Venezuela to Switzerland within the first 10 weeks of 2016. How much longer can this outflow continue? This gold is being exported by the BCV in order to participate in swaps (or maybe even outright sales) in order to provide external financing to the Venezuelan Government. The fact that the gold is being picked up by Brinks Switzerland suggests it is being brought to a Swiss gold refinery. The main reason gold is sent to Switzerland is so that it can be refined or recast.

At least 3 entities have been associated with this external financing so far, namely Citibank, Deutsche Bank and the Bank for International Settlements. Bullion banks and the BIS hold gold in long-term holdings in the form of Good Delivery Bars, and enter into gold transactions using Good Delivery bars, not kilobars. With 50 tonnes of Venezuela’s gold left behind at the Bank of England in 2011, there were only another 160 tonnes of gold bars at the BCV vaults that were not old US Assay Office bars. The gold now going from the BCV to Switzerland is, in my view, old US Assay Office bars. This would suggest that more than 200 tonnes of Venezuela’s gold is already in play, as well as the 50 tonnes from Q1 2016.

With the BCV being totally opaque about the real state of its gold holdings, and with the IMF / World Gold Council still reporting the fantasy that the BCV  / Venezuela holds 361 tonnes of gold in its official reserves,  some speculation is in my view acceptable, and the above information should go someway towards illuminating a truer state of Venezuela’s gold holdings, but what that true state of play is, only the BCV, Venezuelan Government and associated insider bullion banks and central banks know.

Note, that it’s also possible that Venezuela exported gold to Switzerland (or elsewhere) in February 2016. Swiss customs data, which shows (non-monetary) gold imports and exports, including de-monetised gold, is available each month but with a lag of 3 weeks. Therefore the February 2016 data is available on Tuesday 22 March, on the Swiss Customs website.