While the Chinese and Indian populations are well known for their insatiable appetite for importing, buying and hoarding physical gold, there is one market in the West that does likewise but which flies under the radar slightly, garnering less attention than China and India. That gold market is Germany.

Although German citizens are known for their fondness for holding gold, the vast size of the German population’s gold holdings was clarified recently in a newly published survey commissioned by Reisebank, a bank active in the German precious metals market.

The survey, conducted by the Research Center for Financial Services (CFIN) on behalf of Reisebank, found that German adults currently own a staggering 8918 tonnes of gold, worth about € 330 billion at current Euro gold prices. Note, this figure is gold held by private citizens in Germany and does not include the gold reserves of the German central bank, the Bundesbank, which amount to an additional 3370 tonnes.

With a total population of around 82 million, of which 69 million are over the age of 18, the CFIN survey found that an impressive 38% of German adults own physical investment gold in the form of gold bars or gold coins (26 million people), 61.5% of the adult population own gold jewellery (45 million people), while 14.5% of German’s adult citizens own gold ETF and similar unitised products e.g. Xetra gold and Euwax gold products (about 10 million people).

The CFIN research centre, which is connected to Steinbeis University in Berlin, has been conducting these surveys of German gold holding habits for the last 10 years and has so far conducted six of these surveys.

CFIN’s 2019 report, loosely titled as “Gold Investments 2019: Indicators, Motives and Attitudes of Individuals“, aims to, in the words of CFIN “record and analyze the extent of gold ownership, the use of gold as an investment, and the motives and attitudes towards gold in the German population.”

Physical gold ownership is extremely common across the German population. German citizens use  gold as an investment and the majority of their gold investments are in the form of gold bars and gold coins.

Private individuals in Germany continue to consistently buy gold to add to their gold holdings. The 2019 survey total of 8918 tonnes of gold held in the German private sector is the highest total on record.

According to the survey, 91% of respondents said they are happy with their choice of gold as an investment. Nearly 83% said they are going to keep their gold, and over 78% who recently purchased gold intend to buy more gold in the future.

While one quarter of Germans buys gold via online transactions, 62% walk into a precious metals dealer or bank to execute their transactions. The survey also found that gold buyers in Germany are very conscious about making sure that the gold that they buy has been tested and assayed, and ensuring that the gold dealers that they use are reputable.

German citizens own 2.64 times as much gold as the German central bank holds. But while the Bundesbank gold gets a lot of attention, due to its large size and the Bundesbank’s recent gold repatriation efforts, the fact of the matter is that the Bundesbank’s gold holdings are static and far smaller than the gold held by Germany’s citizens.

Although the German population holds a lot of gold, it also holds a lot of other wealth and assets, and total gold wealth held by the population only makes up around 1.6% of total assets held by German households.

Majority of Germans’ gold not stored at home

The large percentage of Germans storing their gold in bank safe-deposit boxes may look surprising but can probably be explained by the fact that in Germany many banks sell gold bars and gold coins directly to their customers, and its quite normal to walk into a bank in Germany to buy gold. So German banks that offer precious metals also offer safe deposit boxes, all in the one and same location.

Between the last survey in 2016 and the current study, Germans have bought another 220 tonnes of gold bars and gold coins. In the last two years alone, the latest survey found that 25% of respondents said they had bought investment gold, with an average investment of € 4,730. Over 50% of those buying investment gold opted to buy gold bars (mostly classic gold bars) while over one third of buyers opted for gold bullion coins. Only 11% of survey respondents said they has sold gold during the same period.

A Resisbank dealer quoted in a Die Welt article covering the survey publication this month said that customers “especially wanted gold bars from 100 grams upwards, as well as gold bullion coins”, and that macro-economic “uncertainty was the main driver of demand”.

Over 26 million adults in Germany hold investment gold in the form of gold bars and gold coin. That is quite a staggering number. But why is physical gold so popular among Germany’s citizens? Generational memories of hyperinflation in the 1920s and how the value of paper currencies can be destroyed probably play a part in demand. So too must generational memories of war and upheaval, the partition of Germany, and the importance of gold in times of crisis and emergency. This would seem logical and would cover gold’s inflation hedge, store of value and save haven properties.

CFIN notes that Germans hold gold as a value hedge i.e. wealth preservation, while Reisebank notes gold demand in Germany is driven by macro uncertainty. i.e. financial insurance. As a tangible investment lacking in counterparty and default risk, gold is indeed ring-fenced from the banking system and is a traditional safe haven as well as a long term store of value, so Germans appear to intuitively know this.

The results of the latest CFIN survey are also interesting in that they show that far more Germans invest and save in physical gold than invest in the stock market. That can be concluded based on a recent study by Deutsche Aktieninstitut (DAI), the German capital market industry group, which found that only 10.3 million Germans hold investment in shares or equity funds, which is far smaller than the 26 million Germans who, according to the CFIN survey, hold investments in gold bars or gold coins.

A word about the survey methodology. According to CFIN, its survey was calculated by asking 2000 adults across Germany about their holdings of physical gold, gold jewellery, and security related gold investments, while adjusting the results by region, income and wealth related factors. While a survey of 2000 people might seem like a small sample size, its actually not, since this size of sample is adequate for a population of 69 million with, for example, a confidence level of 99% and a margin of error around 3%.

So as long as the survey respondents are telling the truth about their gold holdings, the survey results can be said to be valid. As to whether this is a valid assumption is hard to say. 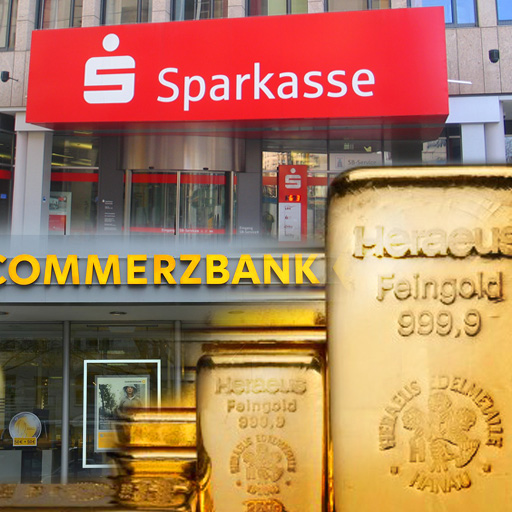 For those not acquainted with the German gold market, its sheer size, depth and sophistication will at first be surprising. The market is a decentralized one, involving many banks, gold refineries, national gold wholesalers (such as Ziemann Valor) and myriad precious metals retailers, all of which sell physical gold products to the general public. These banks include Commerzbank, the Landesbanks (regional banks) such as Bayern LB, LBBW, and Helaba, the Volsbanken (peoples banks) and Raiffeisenbanken (cooperative banks), the Sparkassen (savings banks), and also the aforementioned Reisebank.

Reisebank is one of the top three gold dealers in Germany and supplies gold and other precious metals to more than 1200 Raiffeisenbanken across the country. As well as supplying gold to the Raiffeisenbankens,  Reisebank (which had a throughput of more than 32 tonnes of gold in 2018) sells gold through over 100 of its own branches, a lot of which are located in German railway stations and airports.

There are eight Landesbanks across Germany, all of which sell gold directly to the savings banks in their regions, but Bayern LB, LBBW, and Helaba also act as national gold distributors to other gold wholesalers, other banks and to gold retailers throughout Germany.

Given such a deep and liquid gold market, the average German private customer can easily buy gold bars and gold coins from a huge number of outlets and has a massive choice in doing so, both at the physical premises of banks and bullion dealers, as well as online. This sophisticated supply system of investment gold across Germany may to some extent also help explain why so many Germans hold gold bars and gold coins.

Adding in privately held German gold to the 25,000 tonnes of gold estimated to be held in India (as of 2019), and the more than 20,000 tonnes of gold estimated to be held in China, means that there are at least 55,000 tonnes of gold held within the borders of these three countries. So even though China and India make the news more often for their gold demand, gold imports and overall gold holdings, the German public are approaching the league of private gold holders in India and China, a point that is sometimes crowded out by the media coverage of Asian gold demand and the East’s gold holdings figures.